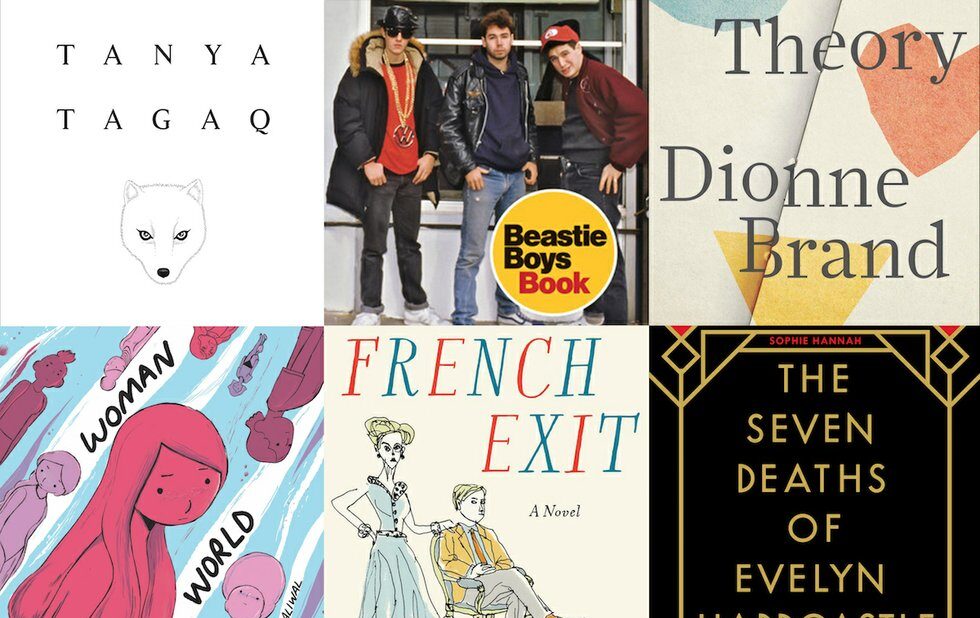 Big names are publishing new books in the run-up to the literary awards season. Here are some books you’ll likely see on short lists – and a few options to lighten things up.

Anything from Edugyan, author of the superb Giller Prize-winning Half-Blood Blues, is a major event. And the fact that Washington Black has made it onto the Booker long list makes it more so. It’s a slavery story with a twist. By a strange stroke of luck, Washington Black, a slave to a vicious plantation owner in Barbados, winds up with an eccentric master – an abolitionist. But his (relatively) good fortune doesn’t last and soon both master and slave are on the run through America and as far as Canada. Edugen’s gift for image and her ability to ratchet up tensions makes this one of the most highly anticipated releases of the year. September 4

Nunavut-born Tagaq has taken the music world by storm with her throat singing (she won the 2014 Polaris Prize), infuriated animal rights groups by eating seal heart and has generally become a one-woman force of shock and awe. So it’s no surprise her first literary foray is generating big buzz. Exploring the realities of small-town life, nature’s untameable forces, the trauma of abuse, Tagaq’s mélange of prose, poetry, memoir and myth is guaranteed to be a literary disruption – in a good way. September 25

Award-winning Hage returns to Beirut, the setting for his first novel, in this story of the inevitable steady decline of a community torn apart by war. Rawi’s irresistible premise involves 20-something Pavlov, who inherits his father’s undertaking business and discovers its rebellious underside: it has been giving burial rights to those who have been denied it, queers, atheists among them. Pavlov continues these good works – with consequences. Sounds grim, but Hage always combines tragedy and comedy in deft ways. August 28

In this ingenious mix of fiction and fact, Humphreys explores the imagined inner life of a highly skilled female salmon-fly dresser, who was indispensable to the fishers of her time. As she probes the life of the author – who was both extraordinary and ordinary in many ways – the author meditates on the art of writing, how to bring a character to life as well as what matters and what doesn’t. Typical of Humphreys, the book is magical and mesmerizing and surprisingly, given the subject, deeply emotionally satisfying. September 4

An unnamed, ungendered graduate student believes her thesis – on the history and future of art, culture, race, gender, class, politics – will revolutionize academic thinking, only to have the project derailed by a series of affairs. It turns out her lovers don’t agree with her on everything. This is a novel of ideas, but it’s extremely moving at the same time. Theory is driven by Brand’s own complex thesis that emotions stimulate the intellect, but the strongest ideas cannot be easily articulated, morphing all the time. September 18

All-women communities, founded out of crisis, continue to fascinate creators – see the Netflix TV series Godless, to name just one. In this graphic novel, a birth defect has wiped out the male population, leaving its females to figure out a way to survive. They rally under the flag Beyoncé’s Thighs. Dhaliwell attracted over 150,000 readers to the Instagram account where she first posted the narrative and for good reason. It’s both politically astute and very funny. September 11

7. HALF SPENT WAS THE NIGHT: A WITCH’S YULETIDE by Ami McKay (Random House)

Ami McKay, inspired by her personal discovery that several of her female ancestors were tried as witches, has taken deep pleasure in shedding light on the surprising fact that witchcraft was a booming business in 19th-century New York City. In this new novel, a true follow-up to The Witches Of New York, the witches gather after Christmas, using their art to predict their futures. When they get a surprise invitation to a New Year’s Eve party, ever wary, they have to decide if it’s a trap or an opportunity. Whether she approaches the subject of sex work (The Virgin Cure), women’s reproductive rights (The Birth House) or witchcraft, McKay’s gripping novels stay true to history and women’s experience. October 16

DeWitt, winner of the Governor General’s and Writers’ Trust Awards for The Sisters Brothers (soon to be a major motion picture) is back with another novel, comic in intent but soulful at heart. This one features a scandal-ridden mother-son duo who flee to Paris to start anew but, as the saying goes, you take yourself with you wherever you go. So the self-destructive pair find another path to economic disaster. DeWitt remains a master of tone, sending up high society in hilarious ways, while managing to make two not very likable characters sympathetic. August 28

9. SOMETHING FOR EVERYONE by Lisa Moore (Anansi)

The St. John’s-based writer’s novels may have received their own acclaim (her 2005 Alligator was shortlisted for the Giller Prize), but I think the short story is best suited to her signature, North Atlantic Gothic style. This collection, driven by her precise, very pointed prose, covers everything from a rock star jumping ship in the Arctic to a couple facing off over who should get out of bed to console their crying baby. Moore is always expert at giving us a vivid glimpse of both the major and minor moments in life. September 4

10. THE TATTOOIST OF AUSCHWITZ by Heather Morris (HarperCollins)

Ever since the late Claude Lanzmann’s Holocaust epic Shoah featured the traumatized Jewish barber who cut prisoners’ hair before they were sent to the Auschwitz ovens, survivors’ challenges have fascinated and appalled historical observers. Now, Heather Morris uses the novel form to shed light on the Jewish prisoner who tattooed numbers on the arms of those who suffered in the infamous concentration camp. Morris was working on a film project when she interviewed Ludwig “Lale” Sokolov extensively about what he saw – acts of bravery, kindness and desperation – before he was freed. She then chose the novel as her medium. As time ticks on, literary works about the Germans’ mammoth act of genocide and its devastating impact grow become more and more essential. September 4

In this second book in Robinson’s entertaining Trickster trilogy, David is now clean and sober and has given up his lucrative weed cookie business. But as his grades continue to suffer, his hard-partying witch (really) of a mother’s violent ex continues to hound him. His Aunt Mave shelters him but can’t deal with his problems, and David continues to struggle. Of course, the trickster theme persists – there’s way more magic in David’s life than he can handle. The first in this series was shortlisted for the Giller Prize. Expect rollicking humour and surprising tonal shifts in this one, too. October 2

Crean – one of Canada’s premiere exponents of creative non-fiction – never could let go of her memories of her “grandfather by affection,” Mr. Wong, the cook and housekeeper to her Irish-Canadian family. Determined to illuminate the life of someone among those usually consigned to invisibility, Crean pieces together Mr. Wong’s history, researching in China and the Chinatowns of Vancouver and Toronto. But this is not only a personal story. It is a meditation on discrimination, the blurred lines between family and servant and worker and employee and the complex role of memory. October TBD

This memoir (sorta) of the punk-turned-hip-hop band is just like the Beastie Boys: loud, exuberant and little out of control. The book tracks the development of what became a major influence on pop culture over nearly 30 years. It covers everything from their early days, when their rap album License To Ill became the first hip-hop album to reach number one on the charts, through their artistic high point Paul’s Boutique to their social activism, which at the time was rare in the music scene. It’s not your run-of-the-mill chronological tale – the book includes original illustrations, mixtape playlists, original pieces by guest contributors, a whack of batshit digressions and, of course, pics galore. The price tag is a hefty $50. October 30

In the age of Trump, insight into the American zeitgeist is always welcome and few writers offer it with Shteyngart’s soulfulness and hilarious outrage. Hedge fund operator Barry runs away from his wife, the daughter of Indian immigrants, and three-year-old autistic child hoping to reconnect with an old ex and change his life. Delusional and narcissistic, Barry’s not an easy protagonist to like, but that doesn’t stop Sheynhart from creating a surprisingly warm-hearted novel, absolutely of its time and extremely smart. September 4

Shaughnessy Bishop-Stall, known for Down To This, his award-winning investigation into Toronto’s Tent City, applies his journalist chops to the search for a foolproof hangover cure. Not only does he delve into the specific effects of alcohol on the body, he looks at some of history’s most prodigious drinkers – Winston Churchill and pitcher David Wells, among them – to discover their strategies for dealing with the morning after. And he’ll try anything, from eating charcoal dissolved in eggnog or swallowing olive oil before imbibing to jumping off the Stratosphere tower in Las Vegas after a big night out. Sounds wacky, but there’s lamentation here with the lightness. November 27

You can’t blame a good writer for snagging the literary strategy of a book that altered America’s consciousness. Like Ta-Nehisi Coates, whose Between The World And Me sat on top of the bestseller list for weeks, Hosseini (The Kite Runner) has written Sea Prayer from the point of view of a father writing a letter to his son. And, like Coates, who wrote about something as profoundly troubling as racism, Hosseini has a similarly impactful subject: the current refugee crisis. In the book, this one fiction, a father and his son are about to leave their country. As he prepares the boy for the treacherous trek ahead, we get a sense of how their city has become a war zone and why they must flee. Proceeds from this book go to the UN Refugee Agency and The Khaled Hosseini Foundation, which assists refugees around the globe. September 18

While feminists have taken heart at the burgeoning #MeToo movement and its powerful impact on the public consciousness, many of us are mystified at the same time. We’ve been talking about this stuff for decades. So, why now? What about the current circumstances has given feminism’s basic values such traction. Author and long-time New York Magazine contributor Traister explains that throughout history, women’s anger – any emotion, actually – has gone from being dismissed until now it’s being taken seriously. October 2

18. THE SEVEN DEATHS OF EVELYN HARDCASTLE by Stuart Turton

Fall is prime time for literary stars to release more serious books. But that doesn’t mean all your reading has to be heavy. Consider this smart murder mystery set in the future at a Downton Abby-type estate, where the owners’ daughter has been murdered. Aidan, an invitee to the ball where the death has been discovered, has to find the killer. Here’s the Groundhog Day-esque twist: the events of the day are repeated eight times, and each time Aiden finds himself in the body of another person associated with the victim. September 18