On Wednesday night, Spanish music blared in the Gladstone Hotel ballroom as Toronto-based journalist and author Naomi Klein stood at. 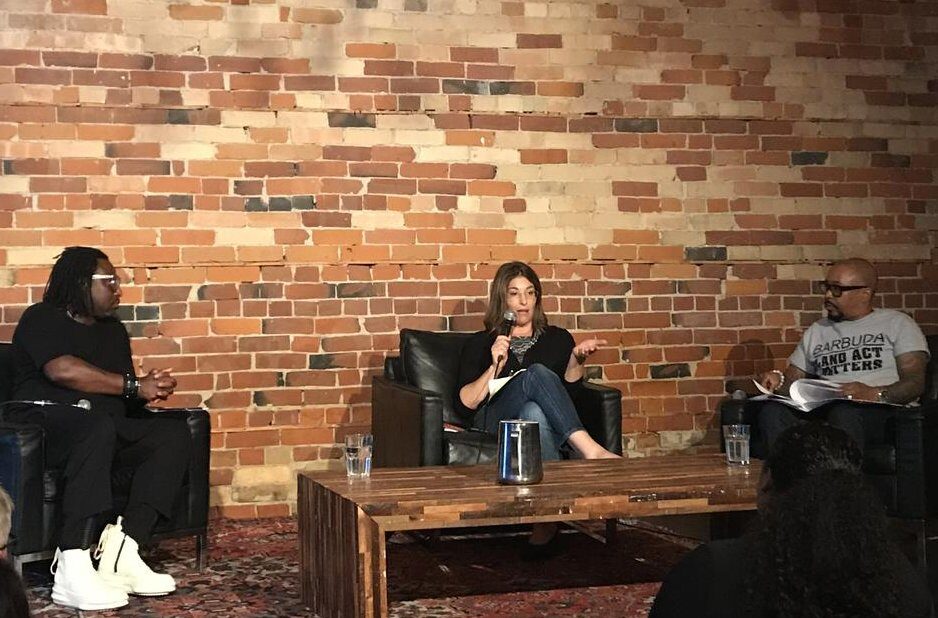 On Wednesday night, Spanish music blared in the Gladstone Hotel ballroom as Toronto-based journalist and author Naomi Klein stood at the front of the room greeting arrivals. The launch for her new book had the hotels ballroom overflowing with people.

The Battle For Paradise is Kleins latest investigation into disaster capitalism, also the subject of her 2007 work The Shock Doctrine, which looked at the ways corporations and governments use disasters such as hurricanes to force through neoliberal policies. All royalties from the book, in both English and Spanish, is going to JunteGente, a group of Puerto Rican organizations fighting for fair and healthy recovery of the island.

The Battle For Paradise examines specific events in Puerto Rico in the wake of Hurricanes Irma and Maria, but the talk at the launch quickly expanded to disaster capitalism at large and a similar situation in another Caribbean island, Barbuda.

After showing a short clip from the books accompanying short documentary produced by The Intercept and publisher Haymarket Books, Klein was joined in discussion by Anwar Knight, a representative of the Barbuda-Canada diaspora, and Rinaldo Walcott, associate professor at the Ontario Institute for Studies in Education and director of the Women & Gender Studies Institute at the University of Toronto, who moderated the discussion.

Here are five things we learned:

Disaster capitalism refers to profiting from destruction in the wake of a disaster. It is the exploitation of shock.

Klein first used the phrase when reporting in New Orleans after Hurricane Katrina. During the book launch, she recalled being at a meeting in the flooded city at which someone said they dont need disaster capitalism, but disaster collectivism to have a response to shock. However, Klein responded that planning for a shock is hard and the reason why people are vulnerable to exploitation.

When you have been evacuated from your home, when you are fighting for the basics of life, when you are navigating these all-consuming bureaucracies, those are the absolute worst conditions for political organizing, she said, adding, that is why this political strategy is so popular and why it rears its head again and again because it is a democracy-avoiding strategy it gets people out of the way.

“This is not just happening in Puerto Rico, this is happening everywhere where we are seeing these shocks hit.”

When it came to writing a book about disaster capitalism, Klein is practising what she preaches. Everybody who was involved in this book didnt make any money, she said. That was the condition for doing the book: no one was allowed to be a disaster capitalist.

The Battle For Paradise covers the aftermath of the 2017 hurricane disasters in Puerto Rico and how investors and political powers swooped in to profit off the turmoil. A short documentary screened before the talk showed how the school system in the U.S. territory is being privatized.

They are closing down around 300 schools in Puerto Rico and also opening them up to charters and vouchers just like they did in New Orleans. Just this past week there has been more talk about privatizing water in Puerto Rico, said Klein, adding that citizens fear electricity will be next.

One of the people from Puerto Rico once said to me, My fear is we are going to end up with a lot of electricity, but no power no political power. Which is something that really stayed with me, Klein said. Puerto Ricans are being forced to leave because of the disastrous response to disaster.

However, people are fighting back through JunteGente, an umbrella group of organizations resisting disaster capitalists.

Klein said that there is this fantasy of the blank canvas or islands that become a dream laboratory in which investors can experiment. An example is cryptocurrency.

Theres this fantasy of creating a crypto-land and its this fantasy of the blank slate, Klein said, adding that authorities tell investors that these places which are devastated become a blank canvas. Its this idea that you see [blankness] in the rubble. Not pain, not need, but just the inconvenient people being swept away.

She said that disaster is the ideal situation for this attitude because geographic isolation leaves people vulnerable to white supremacy.

A lot of people in Puerto Rico were talking about green colonialism and this particular thing that is happening now where you have Elon Musk and the Clinton Foundation… the do-gooder industrial complex [is] coming in.

Klein said such do-gooders get free advertising from projects in disaster zones.

[Elon Musk] blasts a Tesla car into space and everybody is talking and doing his marketing for him, she said. He used Puerto Rico in the same way. He put up solar panels in a childrens hospital and got more advertising out of that.

Is it for Puerto Ricans or is it for visitors projecting this paradise found?

When preparing to launch the book, Klein said she wanted to expand the discussion beyond Puerto Rico and use it as a microcosm for what is happening in the aftermath of many shocks and crises.

Many people in attendance sported a plain grey T-shirt with writing across the middle reading Barbuda Land Act Matters.

In January, an amendment to the Barbuda Land Act was pushed through the Senate of Antigua and Barbuda, which essentially repeals protection of Barbuda as a sustainable piece of land in the Caribbean.

People like Robert De Niro, an investor in the island, will benefit while land is taken from Barbudans.

It appears that Robert De Niro and Trump share more in common than they would want to admit, Walcott said.

There is a push by developers to use this absolutely devastating hurricane that caused a total evacuation of Barbuda in a very predatory way and change this land law to the benefit of developers, she said.

Knight showed a PowerPoint presentation detailing the devastation and situation of Barbuda. In it, he featured a comparison chart, which showed that De Niro bought 555 acres of land for just north of $6 million, whereas comparable plots of land were going for about $54 million.

Knight says that De Niro plans to build a luxury resort on the island with private pools and golf courses while most of the islands residents can barely muster up enough drinking water to survive.

During the Q&A portion, a majority of the questions were a version of What can we do?

How can we really fight this? asked one woman who identified herself as Puerto Rican. I really want to join these forces, but sometimes we feel lost in the process.

Its really heartening to hear the desire to build these international relationships because we are up against international forces, Klein said. But we also have to dig in where we are, weigh out that vision, and organize and then it spreads internationally.

The reason why we are doing this fundraiser tonight and the reason why the proceeds are going to JunteGente is because somebody said help. Barbuda needs all kinds of help, Klein continued, while cautioning the audience that helping can also be exploited. The point is there won’t be any real help if the people who are fighting for Barbudans political interests are not funded for this fight… we have to fund the political fight.