NOW MagazineCultureBooksAnne T. Donahue’s Nobody Cares is an antidote to Girlboss-type memoirs

Anne T. Donahue’s Nobody Cares is an antidote to Girlboss-type memoirs 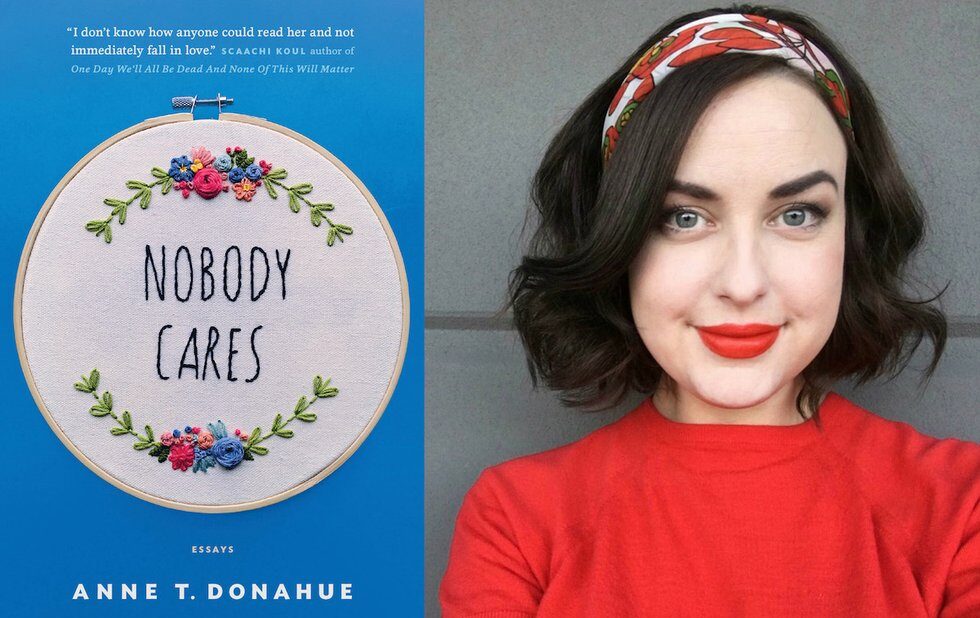 If there’s anyone who knows about living through the never-ending embarrassment of being a young person, it’s Anne T. Donahue. Her debut book, Nobody Cares (ECW Press, $21), is a collection of essays based on her popular newsletter That’s What She Said. Tart and written in the distinct voice of someone who can resourcefully navigate the internet, the book covers an impressive range of topics as it skips between youth’s most over-analyzed moments.

There’s an essay on her first (and seemingly only) celebrity crush on Leonardo DiCaprio, encompassing his youthful prime through the exploits of his infamous Pussy Posse. Another captures the delicate recklessness of working part-time as a young person being blatantly exploited at a local Payless shoe store. And then there are the serious moments, as Donahue shares a story about the process of grieving a family member during the most misunderstood times in her life.

Donahue writes with wit, keen self-reflection and a self-awareness so intense that it’s, at times, discomfiting. She reflects on a memory that most of us would hope no one finds out about. In a mall, on her close friend’s birthday, Donahue projects her stress onto the friend, steering the day to revolve around her, culminating in a dramatic climax that involved yelling. For some, the event would instantly result in loss, but for Donahue, it led to a lesson she’s not afraid to own up to: sometimes we are shitty people and it’s on us to recover from that. (Don’t worry, the friendship remained intact.)

It’s seen as impressive for a man to rack up a list of failures and share the awe-inspiring story of how he succeeded despite his blatant incompetence. Women, on the other hand, don’t get to fail.

Often, memoirs and books taking up the failure narrative finish with the satisfactory resolve that everything is okay if you made it out alive. These books are usually written by famous authors who made it out with six-figure television contracts or millions in venture capital investments to sell you a lifestyle.

To be able to look deeply inward at your flaws and missteps, and make it out alive, is a tale not often told by women. Donahue writes a failure narrative in a way that doesn’t end in triumph or take up the contours of the classic book of essays-cum-vague conciliatory pat on the shoulder. The book is about desk-pounding, throwing your head back in laughter and screaming NOBODY CARES.

It’s also a reminder that failure is an essential component of the internet generation story. It challenges the commonly accepted notion among millennials that to be worthy of value you must do something sensational.

Donahue is often described as “the internet’s best friend” and that reverberates throughout the book. Her tone isn’t authoritative. She writes as an equal, as if you were sitting across from her at a mall food court sipping large sodas very loudly while nuggets of wisdom come shooting out of her mouth.

Her essays avoid the “How I Got It Done” clichés being shoved down our throats. This isn’t a book that falls within the genre of older Girlboss millennials, but an honest chronicle of struggling as a young woman and carving out a path without precedent, a narrative often quarantined from the publishing realm.

Nobody Cares is a book about being in the thick of shit when the worst thing we thought could happen happens when we realize that we’re terrible custodians of ourselves and most of our public-facing life has been spent convincing others that we are good, capable humans. But that’s okay, because nobody cares. Not them, not you and certainly not Donahue.