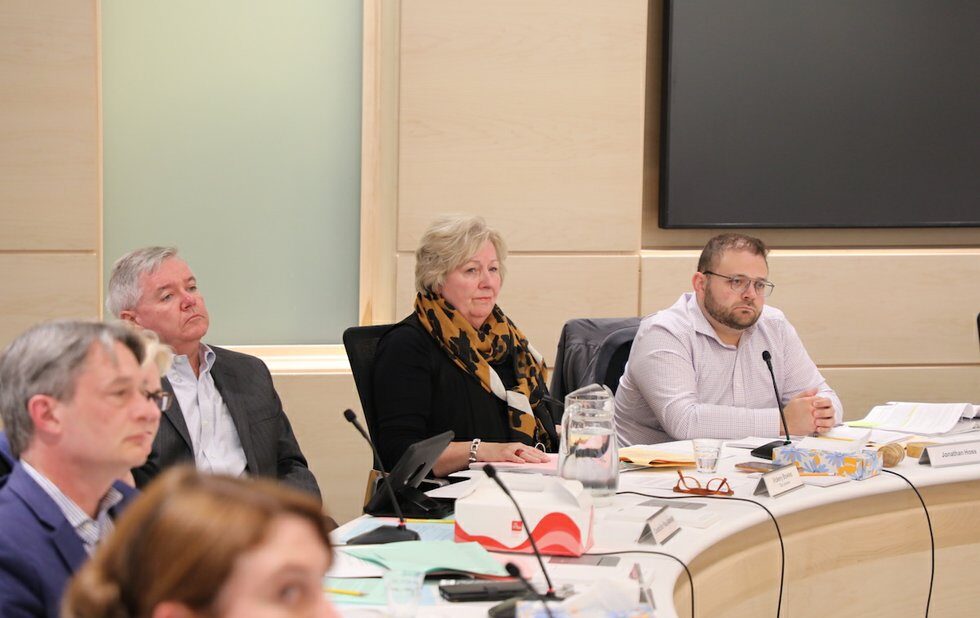 Pride Toronto is organizing a rally to coincide with an event featuring Vancouver-based writer Meghan Murphy.

The October 29 march, which will begin at 4 pm at Barbara Hall Park (519 Church), is being held in response to the Toronto Public Library (TPL) board allowing the Murphy event to proceed during a packed and heated board meeting on Tuesday night (October 22).

In a statement posted on social media, Pride blasted the library board’s “reprehensible decision to support the anti-transgender views of Meghan Murphy.

“Trans woman after trans woman spoke about the hurt and offence caused by Meghan Murphy’s views, their violent and deeply personal experiences told to a room full of strangers,” the statement continues. “Their views and harrowing experiences held little sway in the face of a desire for the ‘free and intellectual’ exchange of ideas.”

Murphy has referred to trans women as men and argued that trans women should be banned from women’s locker rooms, bathrooms and prisons.

After nearly two hours of emotional deputations from LGBTQ community members, the TPL upheld city librarian Vickery Bowles’ decision to not cancel an event at the Palmerston Branch titled Gender Identity: What Does It Mean For Society, The Law and Women? The event is presented by the Toronto group Radical Feminists Unite.

At Tuesday’s meeting, more than 20 speakers shared their concerns about the event. Although only a handful of people were allowed in the main meeting room, around 120 members of the public watched the proceedings on a live-stream from inside an overflow room located a down the hall.

Pride executive director Olivia Nuamah deputed that the library needs to listen to and believe the trans community when they speak abut the harm the event will cause.

“The gatekeepers of the definition of free speech are never subject to the unintended consequences of their desire to foster open intellectual discourse,” she said, addressing Bowles and the library board, which includes city councillors Gord Perks and Paul Ainslie.

“Nearly half of all trans people experience sexual assault in their lifetime…you cannot absolve yourselves of responsibility for this chilling effect when you give space to dialogue that questions the existence of anybody who calls themselves a Torontonian.”

During her deputation, trans poet and writer Gwen Benaway presented the board with over 6,000 signatures from the change.org petition started by local authors Alicia Elliott, Carrianne Leung and Catherine Hernandez calling on Bowles to cancel the event.

“I can tell from the expressions on your faces that you’re unlikely to reverse your decision,” Benaway said to the board. “But as a trans woman, as someone who has been sexually assaulted… who has lost my job for being trans, accosted in washrooms, let me tell you that when we come to talk about trans women’s rights, it’s something you should care about and make efforts to protect.”

Non-binary artist and journalist Al Donato also said they would be stepping down as artist-in-residence at the Oakwood Library branch. Donato is co-producing a sci-fi storytelling event to be performed by Toronto sex workers. Donato noted that because of Murphy’s views on sex workers, the participants, the majority whom are trans women and non-binary, felt like the library was no longer a safe environment for the event.

While the majority were speaking in opposition to Murphy, a few presenters supported the library’s decision. During those remarks, the overflow room became heated as members of public booed the speakers and yelled “TERF,” an acronym for Trans-Exclusionary Radical Feminist.

The TPL brought in extra security, and the police were present for some of the meeting. 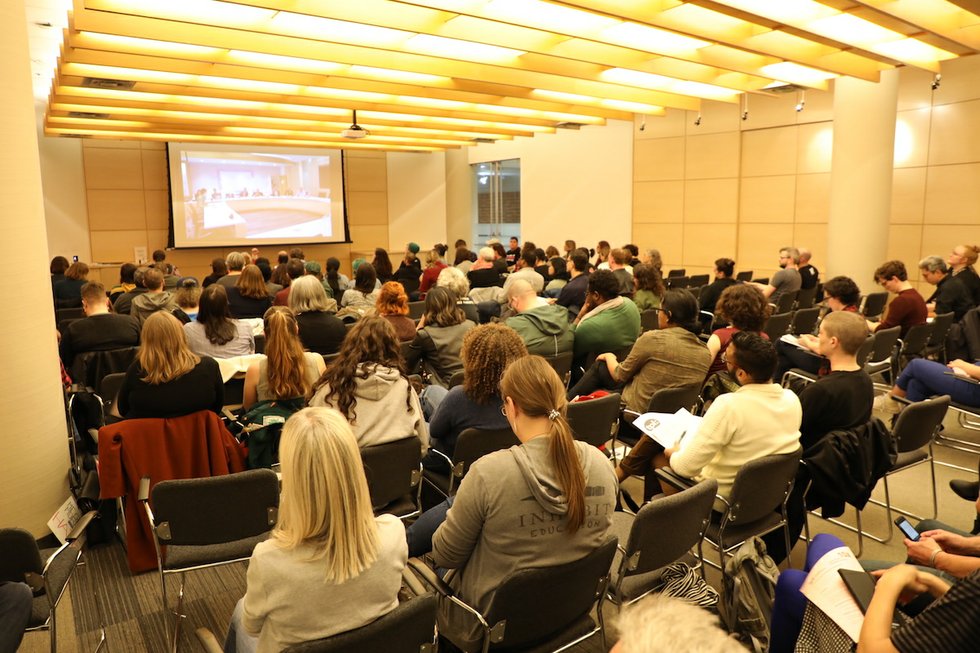 Around 120 members of the public watched the TPL board meeting from an overflow room.

In an interview after the meeting, Benji, who spoke in support of the Murphy event and asked we do not publish her last name, said some of her friends used pseudonyms for their deputations for fears they would be harassed online afterwards. Benji, a 23-year-old lesbian and who identified as trans from ages 13 to 20, says she wanted to speak because she believes there needs to be more spaces for these kind of gender discussions.

“I don’t agree with everything Meghan Murphy says, but I believe we should have a platform to discuss these things in a nuanced and respectful way,” she says.

After the deputations, Parkdale-High Park councillor Perks said cancelling the event would set a dangerous precedent, referring to an incident in 2011 when then-mayor Rob Ford attempted to de-fund the Pride parade because they allowed the group Queers Against Israeli Apartheid to march.

“When I’m being asked to do something, I try to think, what is the broader implication? Many people have asked me to overturn the decision of the city librarian,” said Perks, as boos echoed through the overflow room.

“[As an elected official], if that tool was put in my hand and asked to make case-by-case decisions on who should be allowed to participate in an event in a public venue, then in 2011… Rob Ford should have been in a position to de-fund Pride.”

Perks said that as a board member, it’s his role to ensure the city librarian is following the existing policies, which he says Bowles has demonstrated that she has done. “I don’t have to agree with her decision,” he said. “I just have to agree that she did that work.”

Bowles has stated Murphy’s talk does not violate the TPL’s rental policy and is allowing the event on the grounds of free speech. According to TPL’s policy, a third-party space rental can be denied or cancelled if the TPL believes the use will be for “a purpose that is likely to promote… discrimination, contempt or hatred for any group or person on the basis of race… sex, gender identity [and] gender expression.”

After the march on October 29, the rally will continue at 5:15 pm to a peaceful protest outside of the Palmerston branch. TTC fare and accessible shuttle busses from the march to the protest will be provided. The protest is being led by a coalition of community groups including Artists for Climate & Migrant Justice and Indigenous Sovereignty, Fight for $15 & Fairness and No More Silence, and will feature a “read-in”, where attendees are encouraged to read aloud the works of trans, two-spirit and non-binary authors.

Murphy’s event is currently sold out.

On October 18, Pride Toronto’s board of directors released an open letter warning the library that there would be “consequences to our relationship” if the Murphy event was allowed to proceed. Board member Milloy was more specific in spelling out the consequences, tweeting that the TPL would “certainly find themselves banned from participation in all @PrideToronto events” if officials did not cancel the event.

The story was updated on October 28 to reflect the new time of the Pride Toronto Trans Rally.