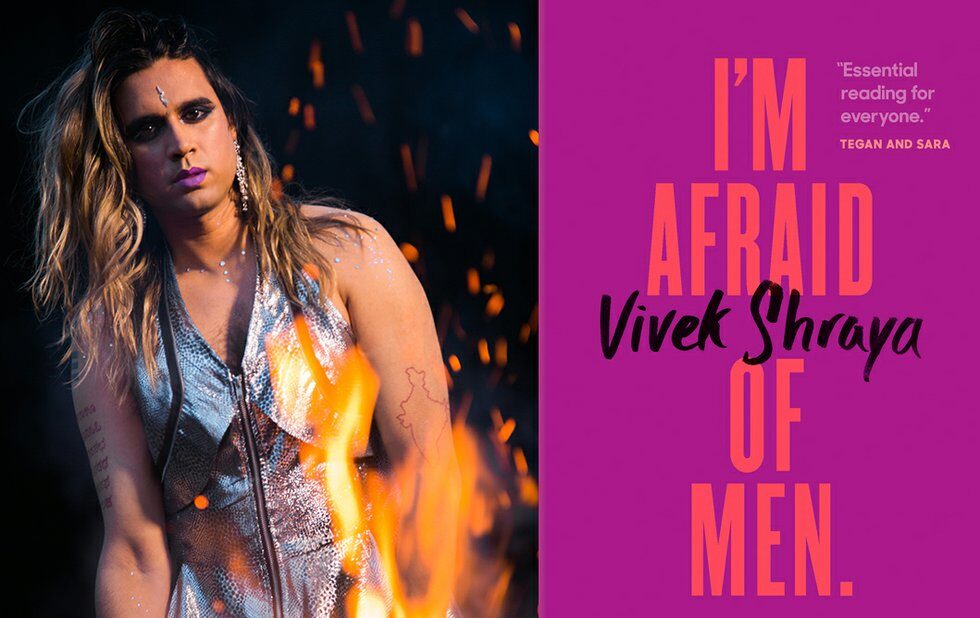 There’s a much-discussed episode in the first season of Master Of None where women describe the difficulties they face in a world of creepy dudes. In the episode’s opening scene, a woman is followed home from a bar late at night. She tries desperately to lose the guy tailing her and at one point even types the first two digits of 911 into her phone. When she finally arrives home safely, she breathes a sigh of relief.

“None of these stories are exceptional,” author Vivek Shraya writes in her new book, I’m Afraid Of Men. “I’m afraid of how common, if not mild, my experiences are.”

Shraya is a transgender woman, artist, writer and musician currently living in Calgary, where she is an assistant professor of creative writing. This is her fifth book, her most personal – it’s her first non-fiction book – and perhaps her work with the most widespread appeal.

In short chapters, Shraya traces her experiences with boys and men, first as an awkward child and then as a teen, bullied in high school for being queer and brown.

As an adult before coming out as trans, Shraya develops a crush on a male friend, which eventually turns into a relationship. But she’s never able to fully relax into intimacy because of discomfort with her own body. In addition, she struggles to come to terms with her own queerness and the colonial implications of dating a white person.

“Falling in love with you – not just a man but a white man – is one of the scariest things I’ve ever done. For months I guard more than just my body, performing my best, most masculine self for you, continuing to drop my voice and suppressing the stories about myself I don’t want you to know,” she describes.

It’s a relatable feeling for many racialized folks who choose to enter into relationships with white people, let alone white men. How do you make peace within yourself when you feel a sense of betrayal? You’re in love with the embodiment of patriarchy, after all. But for readers who haven’t experienced this dilemma, Shraya carries them along.

At some points, she reads like a gender theorist: “I regret all the times in our relationship I told him he was a good man… because good is a nebulous standard… and our desire for something that can’t really be measured sets up every gender failure.” Other passages read like intimate diary entries: “Two months into our friendship, I nervously reveal that I’ve started to have more-than-friendly feelings for you.”

The merging of these dichotomous writing styles works because Shraya so effortlessly jumps between the two. In a way, she’s able to see her own story from the reader’s point of view, acting as both the student and the teacher all at once. Shraya is patient with her reader but unapologetic.

For Shraya, the predicament of loving a white male is compounded by her queerness. Over a lifetime, she’s learned that her feelings and sexuality aren’t valid. So she concludes: “That isn’t love.” And she’s right.

Years later, she comes out as trans, and, as expected, the world is even harder and harsher toward her. She describes dressing herself in clothes that will bring the least amount of harassment from strangers. She describes avoiding eye contact with men while riding transit, in fear they might think she’s attracted to them. She describes feeling discomfort around young male students despite being in a position of power as their professor. She describes the fear of getting into an Uber alone and having to make awkward conversation with her male driver.

Most women, queer men and non-binary folks understand how these situations feel, but for straight, male readers, Shraya’s words might come as a surprise – despite what’s already been unearthed by the #MeToo movement. This book is really about masculinity in crisis, and men should read it not as a series of personal anecdotes but as a literary catalyst for self-reflection and change.

When you flip the book around, the back, which acts as a second cover, reads “Men Are Afraid Of Me.” This alludes to the cyclical nature of fear and perhaps the panic some men feel as a result of the #MeToo callouts. But one more interpretation may be that as women, queer folks and members of racialized communities, we have power in numbers. We must stand together, and it just takes one voice, like Shraya’s, to start the conversation.