Q&A: Tegan and Sara rewrite their history with High School

In a memoir about their teen years, the Calgary pop duo takes control of the narrative on getting high, secret girlfriends and battling trolls on comment boards 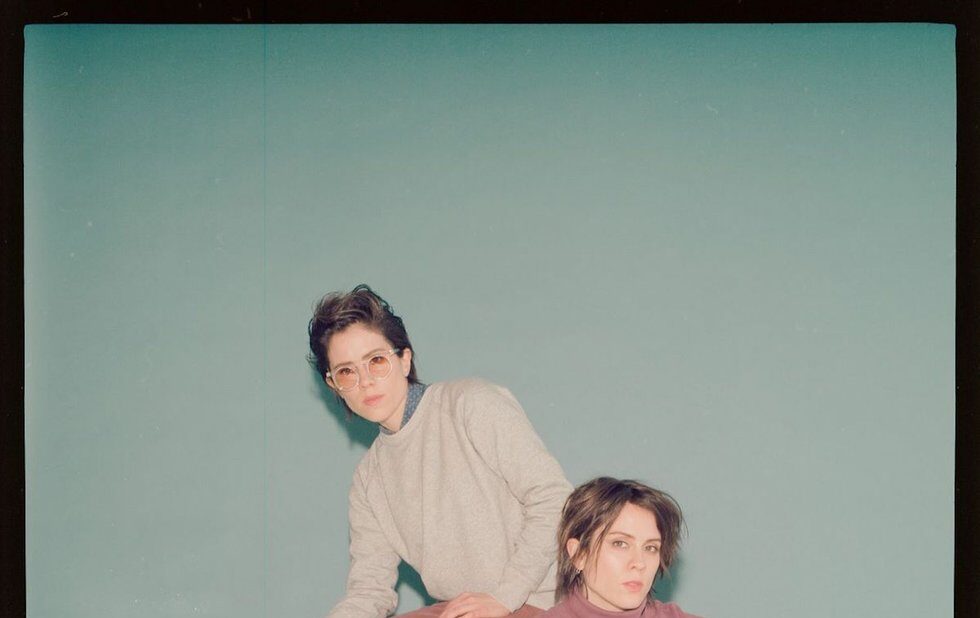 Ever since Tegan and Sara Quin got their first record deal at age 17, they’ve been in a constant whirlwind of writing, recording and touring. Two decades and eight studio albums later, in which their sound evolved from indie folk to glittery powerhouse pop, the twin sisters decided to take a break. Or at least, a sabbatical from the album-cycle grind.

They discussed making a podcast or writing essays, but in the end decided on a memoir focused specifically on their formative high school years from grade 10 to 12 in Calgary. The result is the aptly named High School (Simon & Schuster, 384 pages, $32, out September 24), a candid coming-of-age rife with acid trips, all-night raves, secret girlfriends, heartbreaks and other milestones of teendom.

Written in alternating chapters from each sister’s perspective, the memoir also serves as the band’s origin story: they recount discovering their stepdad’s guitar and covertly learning how to play it, recording their first songs in AV class and eventually getting their first record deal. Coinciding with the release of High School, Tegan and Sara are also putting out an album of glistening pop, Hey, I’m Just Like You, based off the first songs they ever wrote.

Emotional, funny and bursting with vivid details, High School transports you into the psyche of two teenagers growing up, grappling with their sexual identities and on the brink of stardom. Ahead of their book talk and tour, we spoke with Sara Quin about getting high, the rave as a safe space and rewriting their own history.

The book is full of such precise details, like intense play-by-plays of acid trips or sneaking off to raves. How much of High School was written from memory? Did you have a lot of source material to draw from?

This was a horrible joke, but we started calling Tegan “Brett Kavanaugh” because she kept so many journals and calendars. We’d say “She’s a real Kavanaugh! She’s got her accounting of what she did every day in the summer of 1997.” We’d be arguing when a rave happened and she’d be like, “Actually, on page 16 of my journal it says it was on…” So yes, there was a lot of source material.

Initially, Tegan and I wrote down our memories and mapped out the timeline and important stories that we both wanted to tell. Then we both spent some time talking to friends and looking for other journals, diaries and notes. I ended up finding the sex notes [with my girlfriend Naomi] that I write about in the book. As soon as I read them, it was like unlocking a new level in my brain. It was a flood of emotions. We also got around 50 notes from an old friend we hadn’t spoken to in, like, 20 years. Those notes allowed us to remember how we spoke – like we never called it acid we called it “cid” – and dig back into that version of ourselves. In a lot of Tegan’s chapters, she took direct conversations from her notes with [her girlfriend] Alex or the exact dialogue from VHS home recordings. So some of the book was from memory, but some was lifted directly, which I think gives it a real authentic feeling.

What were some of the key stories you for sure had to include?

I wanted to talk about my sexuality. It was important to me to cover the secret relationship with Naomi, and [my later girlfriend] and muse Zoe, someone who I loved from afar but was also terrifying for me. With Naomi, it was easy to write it off as “Oh, this is just a one-time thing.” I wanted [to show] the tension and dread I felt knowing I was going to like girls.

And I also wanted to address our high-risk behaviour around drugs and alcohol. It was a symptom of our trauma of being closeted, struggling with our bodies, being outsiders and the homophobia that was so omnipresent during those years. Sometimes these behaviours are written off as teenagers experimenting, but we were medicating ourselves. It was like I needed the drugs and alcohol as a way to cope with the tremendous fear we had in our lives.

At the time, do you think you had that sort of self-awareness to understand you were using drugs and alcohol as a way to cope?

It’s hard to [say] because I don’t want to add this adult perspective. I don’t think I would’ve said, “I’m medicating when I smoke weed or drink vodka with pink lemonade.” When I was stoned or drunk, I did briefly feel a sort of detachment from my feelings. It’s certainly not unique for teenagers to smoke weed, but I know that what was driving my desire for disconnection was a deep discomfort with my body and my sexuality.

When I look back at high school, there was a real queerness to the people we hung out with. There was this unspoken understanding that people in our social circle were having same-sex relationships and hooking up with each other. This is the adult perspective coming in, but at 16, I wasn’t like, “Hey everyone, isn’t it fascinating that when we go to these raves all the boys are holding hands with boys and the girls with girls?” We didn’t have conversations like that, but it was obvious that we all really liked it and raves were the safest spaces we were ever in.

In the rest of our lives, we were being bullied. People were like, “Why the fuck do you dress like that, you fucking raver loser.” And then we’d go to raves and everyone looked like us and wanted to know where we got our pants.

You say you didn’t want to add your “adult perspective,” which is interesting because I really liked that the book was always written from your teenage self’s perspective. It didn’t have the sort of reflection that would have taken the reader away from the mindset of a 15-year-old.

I really appreciate you saying that because it’s something we talked a lot about when we first put the pitch together. When we took the sample chapters to different publishing houses, certain people were like, “We need more adult perspective. Your current perspective is what’s going to make a 40-year-old mom who also grew up in the 90s be interested in this.” I wanted there to be a sophistication to it, but I didn’t want it to be what we kept calling the adult voice in The Wonder Years. We don’t need adult Kevin describing what’s happening to young Kevin. I wanted people to read the book and be in it. I wanted it to feel the way being a teenager is both fun and dangerous in the same moment. I was worried that if we added too much adult voice, you’d never really have that sense that something bad can happen.

What were the hardest parts to write?

I was shocked by how emotional I felt when I was writing about homophobia. I didn’t remember all the homophobia that existed. I sort of bought into this idea that things weren’t so bad. I just said it to you, “Oh, we were in these communities where it was unspoken and it was accepted blah blah blah,” but I think I forgot how vicious it still was.

I wrote about the one experience about the guy in class saying “fags get AIDS,” but I have a million of those stories. I wanted to tell that story because it wasn’t about the kid, it was about the adults in the room who would tolerate and accept it. I was sick of hearing my parents’ friends call people fags and how the only time I heard about gay people was in a provocative news story when someone was murdered or assaulted.

And it didn’t change for another decade. I spent the first 10 years of our career fighting on comment boards with people who would call us dykes and said that we should be beaten or raped. There was some part of me, even at 17, who did know that it was going to be hard, but I couldn’t have ever understood how hard it would actually be. I felt this grief thinking about what was going to come next.

You have a new album coming out, Hey, I’m Just Like You, that’s made up of songs you and Tegan wrote in high school. How different are these new recordings from the originals?

If you compared them to the demo, every single song on the album is completely recognizable. For the most part we didn’t touch the melodies, lyrics and choruses. Where Tegan and Sara the adult songwriters had to do a lot of work was expanding the songs. Our songs when we were teenagers were a lot more repetitive. If we had a good idea, we made sure that we repeated it a lot. In those cases, we tried to use lyrics we’d written in high school that we found in journals and books.

In High School, you write about the various forms of sexism you and Tegan dealt with as musicians, like your old AV teacher insisting that one of the male students help you record your album even though you were capable on your own, or the older male engineer sort of brushing you off in your first studio session. It made me think about how vocal you and Tegan have been around gender parity issues and getting more women and non-binary folks into production and engineering roles. It’s been an issue you’ve been enduring since you were teenagers.

When I went back and read our first press from high school, it made my skin crawl. There’s this one article where the guy spent half of it writing about how he had to drink so much beer to just survive seeing folksy girls play acoustic guitar, and then the second half about how our music is clearly rudimentary but that we have the potential to become the “future of folk music” or something. I’m going to be 80 years old and there’s still going to be people like “Aren’t they cute? They’re just twin sisters singing their song!”

[I have] this desire to correct that narrative and have some control over our version of the story. Tegan and I have been very patient with the way the world has slowly changed and however we possibly can, be a part of that movement. I love this new album. It was so shocking to think it’s the first time all women worked on a project of our own. We want to live by example. We don’t want to just talk about gender parity or the inequities women, queer people and women of colour face in our industry. We want to show that you can be different and change it.