The celebration of indie comics and graphic novels features an appearance by cult hero Junji Ito, author talks and panels on activism and screen adaptations 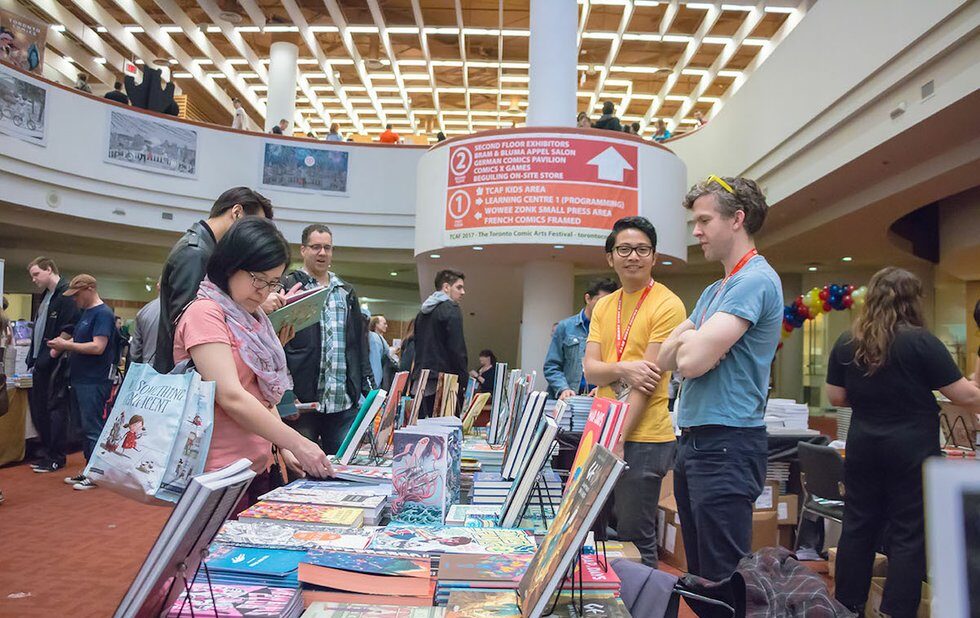 The steady rise in attendance at TCAF since its inception 16 years ago speaks to just how much people are discovering and adoring alternative and indie comics and graphic novels – and the artists and writers behind them. Over 25,000 people will fill the floors of the Toronto Reference Library on Saturday and Sunday (May 11 and 12), perusing the hundreds of vendor tables laid out with homemade zines, full-colour books and everything in between (like @rabbitdonuts’ adorable wooden bun pins).

Tons of publishers choose TCAF as the place to launch hot-off-the-press graphic novels, so it’s always a place of exclusives and artist signings. And the fest’s international focus brings cult heroes to town, often for the first time (Junji Ito!). There are also readings, gallery shows, panels, workshops, interviews and TCAF-adjacent events like the Doug Wright Awards happening at and beyond the Reference Library. It’s a lot to sift through (we recommend downloading the free digital guide), so here are eight best bets.

The acclaimed manga, horror and anime Japanese artist with a penchant for body horror has his first-ever Toronto appearance on Friday (May 10, 6:30 pm), in conversation with Ryan Sands. Then on Saturday (2 pm) at the Masonic Temple Concert Hall (888 Yonge) is a once-in-a-lifetime opportunity to see the artist behind classic works like Tomie, Gyo and Uzumaki live-draw while being interviewed by TCAF artistic director Chris Butcher. TCAF is the place to grip Ito-sensei’s new short story collection, Smashed, and one of his official (and officially gorgeous) TCAF 2019 posters. Get them signed on Saturday or Sunday, 11 am.

If you prefer romance to horror, don’t miss these appearances by another Japanese artistic giant Hiromi Takashima, one of yuri manga’s most popular artists. Yuri is a genre of manga focusing on romantic relationships between girls or women, and Takashima-sensei’s Kase-san And… books are beloved. Hear her in conversation with publisher/historian Erica Friedman at noon on Saturday at the Japan Foundation (2 Bloor East), with an additional signing at the Reference Library on Sunday, 11:30 am. Don’t miss the 100 Years Of Yuri exhibition on display at the library all month.

The experimental and indie comics scene in Latin America has taken flight in recent years, especially in Colombia, so there’s no better time to discover Lorena Alvarez, Edi Jimenez and Juan David Quintero, who take part in a panel at Jackman Humanities Building (170 Saint George) on Thursday (6 pm) and in various library workshops throughout the weekend. Another Colombian cartooning panel happens on Sunday at 2:45 pm at the library, focusing on the variety of styles, genres and themes of the movement and how artists are navigating the country’s creative ecosystem.

Three cheers for queer themes increasingly making their way into young-adult novels (and for finding an audience). One of our favourite Toronto writers, Mariko Tamaki, and American cartoonist/illustrator Rosemary Valero-O’Connell debut their new book, Laura Dean Keeps Breaking Up With Me, during an artist spotlight on Saturday (11 am), where they’ll discuss creating more spaces for healthier relationships in comics. They also take part in a Queer YA panel at the Masonic Temple on Sunday (12:30 pm). And don’t miss the annual queer mixer (for adults) on Saturday (6 pm) at Glad Day Bookshop (499 Church).

Speaking of beloved Toronto authors, recent NOW cover star Vivek Shraya launches new book Death Threat, a response to the transphobic hate mail she’s received, with the book’s artist Ness Lee on Friday (7 pm) at Innis Town Hall (2 Sussex) – also a launch for Téa Mutonji’s Shut Up You’re Pretty. Shraya and Lee appear together at the library on Saturday (1:30 pm) to discuss the dangers of online accessibility and the hate that can come from it. On Sunday (2:45 pm), Shraya also takes part in a Writing For Others panel about how to write with an illustrator.

Comics can offer way more than entertainment and amusement – they are often vehicles for social justice and change. That’s the focus of the Next Page panel on Saturday (11 am) with Tara Krebs, Xiaoxiao Li, Nat Mark, Morgan Sea and moderator Fiona Smyth – Toronto artist extraordinaire and recent inductee into the Doug Wright Awards’ Giants of the North Canadian Cartoonist Hall of Fame. Meanwhile, the Contemporary Comics Activism panel later that day (4 pm) also explores the ways people are educating and organizing through comics.

PAGE TO SCREEN/SCREEN TO PAGE

TCAF and all of its parties can really tire out a comics super-fan, so what better way to rejuvenate than with a mind/body-focused panel about the connections between physical and mental health? Head to the library on Sunday at noon to hear AJ Dungo, Kat Verhoeven, Rachel Lindsay and Sarah Winifred Searle chat about exactly this with moderator Glen Downey. That is, if you aren’t too wiped out by then.