In early February, comic creators from across North America were targeted in a series of coordinated online attacks.Alt-right trolls created. 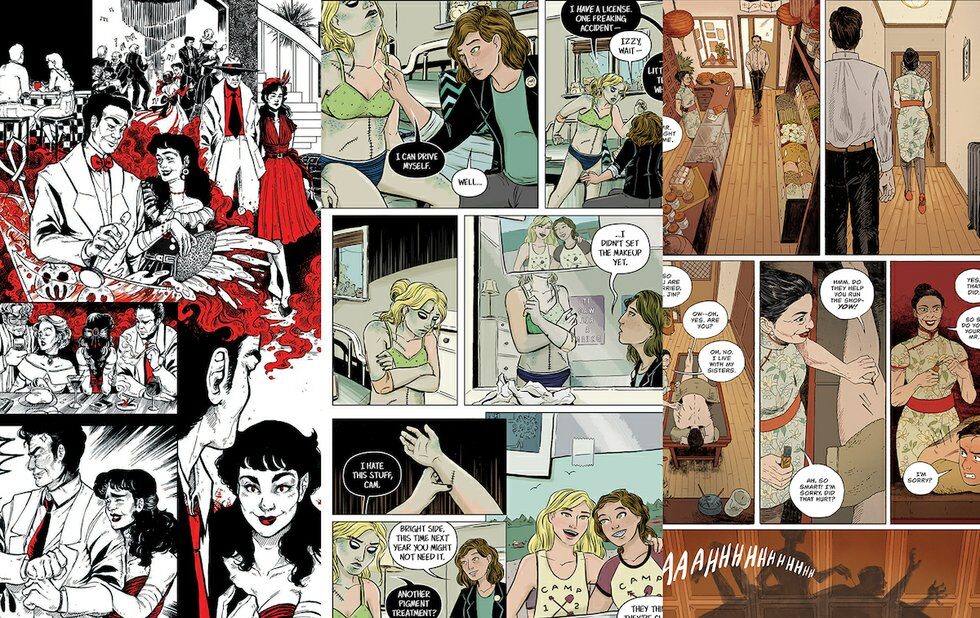 In early February, comic creators from across North America were targeted in a series of coordinated online attacks.

Alt-right trolls created a blacklist of artists who do not identify as straight white men, i.e., women, people of colour and those identifying as gender non-binary. The blacklisted artists were bullied on social media, in direct messages, public mentions and videos. Some even received death threats.

Around the same time, Toronto-based editor Allison OToole was preparing to launch Wayward Sisters: An Anthology of Monstrous Women (TO Comix Press), an anthology of new stories by 38 female-identifying and gender non-conforming writers and illustrators, 17 of whom are based in the Greater Toronto Area.

Far from a deterrent, the online harassment has only emboldened her and the books contributors.

This was reinforcement, OToole says. We need to spotlight the work of women, non-binary and diverse creators and its important for people like me who are in the position to put peoples work out there to do it.

The anthology explores story potential largely untapped in the wider world of comics.

I grew up loving monster stories, says OToole. But it was frustrating rarely seeing myself in these stories. Women could be victims, love interests or sexy, and thats it.

The monsters in the anthology include an undead motivational speaker, vengeance demons, mermaids plotting escape, a half-orc longing for a better life and a T. Rex who wants to be loved.

Wayward Sisters has already proven there is a demand for comics about monsters by women and gender non-conforming creators. OToole funded the project largely through a Kickstarter campaign that earned $35,646 (double its original ask) from 1,073 backers. That went toward production costs and payments to the creators for their work.

Yet the broadening of representation in comics has also fuelled coordinated harassment. (At the request of our sources, we have chosen to not validate last months campaign by naming its hashtag.)

Even though the comics community is relatively small, and creators rub shoulders at comic cons and book fairs, online abuse remains an issue.

People who are used to having everything see equalization as things being taken away from them, explains OToole. You have this group of straight white men who grew up feeling oppressed for being nerds. These guys found a community in comics and now the definition of comics is expanding. Theyre looking for someone to blame, so theyre lashing out against what they see as a diversity epidemic.

Although OToole has only received a few negative direct messages on Twitter about the anthology, others havent been as lucky.

Stephanie Cooke, whose story, Miss Monster (illustrated by Cara McGee) appears in the anthology, was targeted in February.

I left my Twitter feed one day for 30 seconds and came back to 635 mentions, says Cooke, who also runs an entertainment website, Rogues Portal. Twitter, YouTube and Patreon havent expressed an interest in getting rid of these people. You report them and they dont do anything.

Its bittersweet to have this book Im intensely proud of coming out at a time when people are trying to make us feel like we dont belong.

Cooke, whose story is about an unconventional beauty pageant with monster contestants, says negative online experiences have not deterred her.

Its the best feeling in the world when you can relate to characters in books, comics and movies. I want everyone to have that experience, she says. Weve made substantial strides forward and these people are trying to take us further back. It doesnt stop me from wanting to create comics. It makes me want to create more comics.

Lorena Torres Loaiza, another contributor, agrees that continuing to make work is the way to dissuade those who are fearful of change.

Anyone who feels comics are in decline maybe hasnt experienced the current landscape, she says. Its not just superheroes anymore. Theres a ton of indie comics, web comics and a variety of comics from Japan or France and all over the place.

Loaizas anthology story is The Way Home (illustrated by Sabaa Bismil), about a woman who glows like a light bulb. The story shows how women who are visibly different are treated just because of how they look.

Fantasy is a great vehicle to imagine something else, Loaiza says. Like, what if our society didnt have the same gender constructs it has now?