From non-fiction anthologies and memoir to literary fiction, these titles unpack systemic racism and will spur discussion 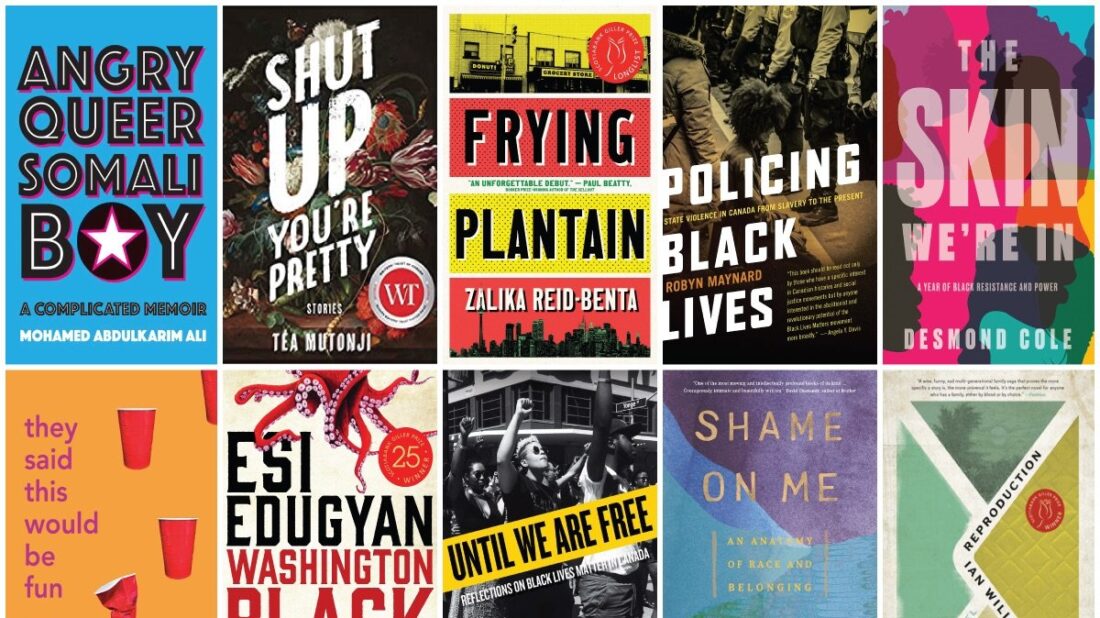 Amidst global protests following the police killing of George Floyd, anti-racist reading lists have exploded on social media. Common titles on these lists – like White Fragility by Robin DiAngelo, So You Want To Talk About Race by Ijeoma Oluo and How To Be An Antiracist by Ibram X. Kendi – have soared to the top of the New York Times Best Sellers List. Reading alone won’t dismantle systemic racism, but it can help us understand how racism is entrenched in every aspect of society and serve as educational guides.

This list of recent-ish releases features a mix of literary fiction, non-fiction and memoir, all written by Black Canadians. Some of these books unpack Canada’s long history of systemic anti-Black racism and the rise of the Black Lives Matter-Toronto movement, while others explore what it’s like to be a Black student in an overwhelmingly white university or to grapple with multi-racial identities.

Scholar and activist Robyn Maynard’s Policing Black Lives debunks the myth of Canada as a multicultural beacon. Maynard retraces the history of anti-Black racism in Canada, from slavery and segregation to modern-day police violence. Although rich in historical examples and government data, Policing Black Lives takes an accessible approach to unpacking systemic racism. It should be mandatory reading in Canadian classrooms. On sale now.

The Skin We’re In by Desmond Cole

Published this past January, Toronto-based activist and journalist Desmond Cole’s debut book chronicles 12 months in the struggle for Black liberation. He writes about the Black Lives Matter-Toronto protests, the police killing of Abdirahman Abdi in Ottawa and the trial of off-duty cop Michael Theriault and his brother Christian, who were charged with violently attacking then-teenager Dafonte Miller. (Last week, Michael Theriault was convicted of assault, a downgrade from the original charge of aggravated assault.) As NOW contributor Neil Price writes, “Cole has wholeheartedly and publicly committed himself to the project of both challenging and documenting the many ways in which white supremacy manifests itself in the lives of Black people.” On sale now.

They Said This Would Be Fun by Eternity Martis

We’ve recommended Eternity Martis’s debut memoir multiple times already, but we can’t endorse it enough. A poignant look at race on campus, Martis recounts her experience as a Black student at Western University, where she had to fend off white girls trying to touch her hair and racist Halloween costumes. Scattered throughout the book is The Necessary Survival Guide For Token Students, in which Martis provides wry yet practical advice for everyday encounters, like how to deal with white friends wondering if they’re allowed to rap the N-word in Kendrick Lamar songs. On sale now.

Esi Edugyan’s Man Booker finalist and Giller Prize-winning book follows 11-year-old George Washington “Wash” Black, a field slave on a Barbados sugar plantation who winds up as the manservant to an eccentric inventor who also happens to be an abolitionist. Using a hot-air balloon to escape, Washington Black follows Wash’s long journey to a safer life. On sale now.

Until We Are Free: Reflections Of Black Lives Matter In Canada edited by Rodney Diverlus, Sandy Hudson and Syrus Marcus Ware

Edited by the founders of BLM-Toronto, this anthology explores Canadian Black activism and organizing efforts. The book contains essays and conversations with writers, academics, artists and activists across Canada including Robyn Maynard, Camille Turner and Sarah Jama. On sale now.

Shame On Me: An Anatomy Of Race And Belonging by Tessa McWatt

In her first work of non-fiction, London-based author Tessa McWatt dissects her own multi-racial identity and complex family history through concepts of colourism, call-out culture, identity politics and violent colonial history. As someone who has been called “Susie Wong,” “Pocahontas” and “black bitch,” McWatt’s explores what it means to find a sense of belonging in “post-racial” times. On sale now.

I’ve Been Meaning To Tell You by David Chariandy

In his latest work, Toronto writer Chariandy meditates on the politics of race in the form of a letter to his daughter. The son of Black and South Asian migrants from Trinidad, Chariandy writes about his own ancestral history, which includes slavery, indenture and immigration and offers advice for cultivating a sense of identity. On sale now.

Mohamed Abdulkarim Ali wrote parts of his stunning memoir while he was homeless in Toronto, writing in shelters, libraries and parks. The book tracks Ali’s journey from his birthplace of Mogadishu, Somalia, to United Arab Emirates, London, Netherlands and finally Canada. He writes candidly about discovering his sexuality, struggles with addiction and his changing relationship with Islam. On sale now.

This year’s winner of the Giller Prize, Reproduction is a hilarious and moving family saga set in Brampton. Felicia, a teenager who recently immigrated from the Caribbean, and Edgar, the heir of a wealthy German family more than twice her age, form an unlikely relationship that will forever leave them entangled. On sale now.