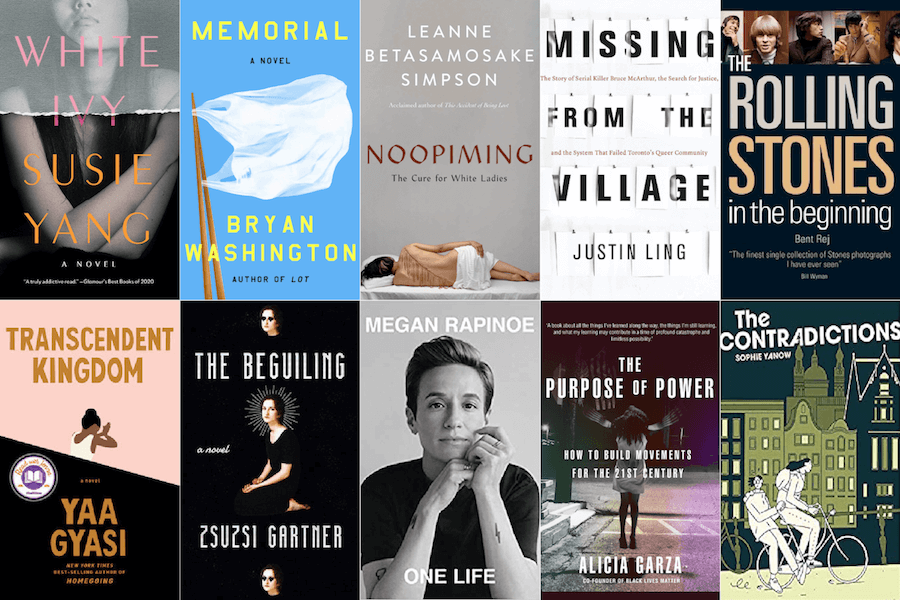 It’s a weird world now everywhere, including on the literary landscape. Book release dates are changing, launches are not what they were and bookstores have only just reopened. But people need stories, publishers continue undaunted – or just slightly undaunted – and fall lists are stronger than ever. Here are 10 new books to watch out for.

The Purpose Of Power: How We Come Together When We Fall Apart

New books by Black writers now dominate the New York Times non-fiction bestseller list, eclipsing even exposés on Donald Trump. The surging interest shows no signs of abating, with releases such as Punching The Air – co-written by Yusef Salaam, one of the Exonerated Five – and The Black Friend by Frederick Joseph sure to make an impressions. But Garza’s new book is essential for anyone serious about resisting anti-Black racism. Long-time organizer Garza, a founder of Black Lives Matter, has an approach that differs fundamentally from the “rules for radicals” she calls outmoded and patriarchal, opting instead to embrace people who are just awakening and taking seriously the idea that love can be a powerful motivator. October 20

Ever since Gartner’s short story collection Better Living Through Plastic Explosives made the 2012 Giller shortlist, Gartner’s signature mix of devastating satire and sharp humour has been powering great short works. In the Beguiling, her highly anticipated first novel, Lucy’s cousin utters a dark confession on his deathbed. This transforms Lucy into a human Wailing Wall, as she begins to attract others ready to confess their failings. But maybe she has a few sins of her own to face up to. An off-kilter meditation on mortality, guilt and desire. September 22

Missing From The Village

Eight dead queer men. All vanishing from the heart of the gay village. Seemingly zero police action. Investigative journalist Ling began writing his account of serial killer Bruce McArthur’s reign of terror in 2015, determined to track the police’s epic failure, the underpinnings of the justice system that guaranteed it and the queer community’s furious reaction. Most important, unlike the police – who ignored the victims and claimed there was no threat to the community – Ling pays proper attention to the stories of each of the men who died. September 29

This novel from one of America’s most promising Black queer writers tracks the relationship between Mike, a chef at a Mexican resto, and daycare worker Benson, that’s not exactly firing on all cylinders. Mike leaves for Japan to see his dying father just as his mother Mitsuko comes to America to visit – leaving Benson and Mitsuko to form an unusual, almost absurd, connection. Meanwhile, Mike has his own revelations about his family in Asia. Washington, a National Book Award 5 under 35 honoree, sees relationships like no one else. October 27

Normally I don’t fall for sports memoirs, but I couldn’t resist this one from American soccer star Rapinoe. Not only has she made her mark as a superb athlete, she has taken huge risks by leading the fight for equal pay for female athletes – as an out lesbian. She is also, not incidentally, the first white athlete to take a knee during the national anthem in solidarity with Colin Kaepernick’s anti-racist action. As a soccer player, her talent is immense. As an activist, her courage is astonishing. November 10

Noopiming: The Cure For White Ladies

Nishnaabeg storyteller Simpson’s genre-bending novel introduces seven characters – some of them elements of nature, others human – who represent aspects of Mashkawaji (they/them), who lies frozen in the ice. As they experience a state of suspended isolation, their seven aspects attempt to communicate with both the urban-settler and natural worlds, only to find them colonized and contained. Noopiming is Anishinaabemowin for “in the bush,” making this a pointed critique of Susanna Moodie’s Roughing It In The Bush and a literary act of decolonization. Guaranteed to make waves. Out now

Already on the Center for Fiction’s first novel long list, Yang’s debut takes a clear-eyed look at a young teen’s desperate attempts to climb the class ladder. Ivy shoplifts with her grandmother in order to secure the trappings of wealth so she can get the attention of her wealthy classmates and golden boy Gideon. As punishment, she’s exiled by her mother to China. Years later and back in Boston, she again encounters Gideon and pursues him relentlessly. Yang knows how to draw a character that’s both sympathetic and appalling. Watch out for her. November 3

While COVID-19 and anti-Black racism now dominate the public’s awareness – and rightfully so – the unintended fallout is that the opioid epidemic, still raging, has been pushed to the sidelines. Gyasi’s new novel, the follow-up to her award-winning Homegoing, brings it back into the light. Gifty, a Ghanian transplanted to Alabama, is studying addiction after her brother, a star athlete, dies of a drug overdose. While dealing with her own grief and that of her completely crushed mother, Gifty tries to reconcile her Christian upbringing with her new commitment to science. September 8

Graphic novels haven’t lost their luster – witness Montreal Mayor Valérie Plante’s decision to release her autobiography in the genre this autumn. The even bigger news is that Seth’s book Clyde Fans is on this year’s Giller Prize long list, the first time a graphic novel has made that cut. Yanow’s Alison-Bechdel-approved The Contradictions leads the fall pack. It’s about a young woman who heads to Paris to study queer and feminist theory. With her new friend Zena, a passionate anarchist, she couch-surfs through Amsterdam and Berlin, while her political assumptions get blown away. Out now.

The Rolling Stones: In The Beginning

The Rolling Stones will be featured in the multimedia exhibition Unzipped at Kitchener’s THEMUSEUM in November 2021. In the meantime, you can check out In The Beginning, which goes back to their roots. Books about the Rolling Stones abound, none more compelling than Keith Richards’s stunning autobiography Life, but there’s nothing more candid than these photographs taken just as the Stones were setting off on their first European tour in 1965. Rej shot on the road, at home and, most rivetingly, on stage. As a result of his unparalleled access, the images have a stunning intimacy. October 20

Farzana Doctor’s Seven is a courageous fictional dive into genital mutilation in India. Martin Amis name-drops like crazy in his autobiographical novel Inside Story. Margaret Atwood follows up her blockbuster novel Testaments with – what else? – a new book of poetry.

Update (September 9): An earlier version of this story included the book Work For A Million, but the publication has now been delayed.