As a queer storyteller, covering up grief, pain and anger with humour came naturally 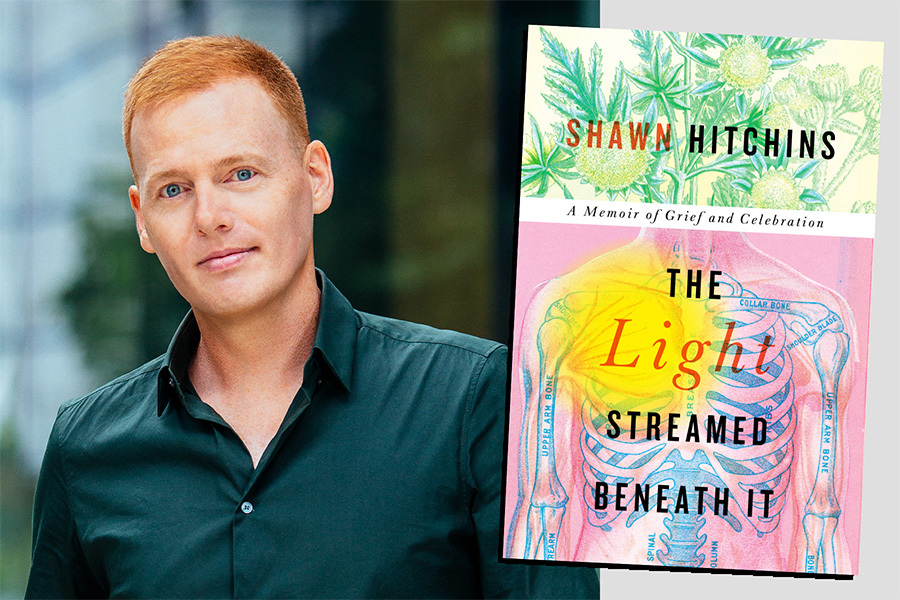 The following is excerpted from The Light Streamed Beneath It by Shawn Hitchins, published by ECW Press with permission from the author. It was featured in NOW’s fall reading issue on October 21, 2021.

When I was 12 or 13, I was whacked in the face by a line drive softball. I heard two cracks. First, the ball against an aluminum club. Second, the ball against bone. The force knocked me backwards, and I saw stars in broad daylight. The impact spared my front teeth, but blood poured out of my nose like an open faucet. The batter was an adult and a registered nurse. After the second crack, she flung the bat to the side and switched from coach to paramedic. She sat me up, grabbed my nose and forcefully snapped it back into place. I laughed the entire time. My nose has since been crooked, veering slightly to the right. Heartbreak is like a broken nose. If it’s not reset properly, you have to rebreak it over and over – the amount of blood and pain doubles with each reset.

“You have a way with words,” my therapist Cathie observed after I rounded home plate with my baseball glory.

“It’s been my livelihood.”

“Mining, digesting, transforming all the shit that happens to me for laughs and applause.”

My experience as a queer storyteller came with an unfair pressure and expectation that we only get to tell our stories once. The telling must be perfectly crafted, accessible and entertaining, and in that demand, a pattern develops. The processing of traumatic events, digested and repeated in a version fit for consumption, reinforced a history that was disconnected from my actual experience. I became the stories that were more tolerable for others to hear.

“Shawn, when you say this, my arms fall off.”

Confused by her statement, I looked at Cathie’s arms, which remained completely attached at her shoulders. “Not sure I follow.”

Cathie shrugged her shoulders to her ears then mimed the left then the right arm falling off and smashing on the ground. It felt like watching a Second City student trying to establish an action while their scene partner freezes in confusion.

She resettled her body and pivoted her approach. “I would like to hear your story.”

There on a grey IKEA couch, I performed an abridged sit-down version of my life story. Just casually offering the highs and lows to a stranger, writing off complex relationships, glazing over developmental trauma and breaking the tension with some of my best jokes. Cathie sat stoically rooted in her occasional chair; a tough audience.

“Shawn, when you tell me this, I feel angry for you,” Cathie said.

The word anger felt dangerous. The anger I knew was unpredictable, physical – the violence and rage I’d experienced in my childhood. It felt like something I wasn’t entitled to express. Nobody likes an angry gay man.

“You told me this story like it’s a routine. What if this isn’t funny? What if what happened to you as a child was wrong?”

Cathie wasn’t a tough audience; she was the first professional empath I’d met. Which was terrifying. I broke my eye contact with her and looked out the window, but I could no longer focus on office workers, their menial tasks or the details of the building. My sight was blurry, my eyes plump with tears.

“Because no one has ever said that it was wrong what happened to me.” My voice cracked.

A few tears escaped from my eyes, and I did my best to suck them back in.

“Why did you stop yourself from crying?”

“That is just what you do!”

“What are you feeling?” asked Cathie. “What were those tears?” She baited her question on a shiny hook and it sunk down inside my body, where it plunked into an abyss.

I thought about the ingredients that made that particular tear. I looked at Cathie.

“I feel like my entire life I’ve been screaming, ‘Where are the adults?’ and I realize that I’m a 38-year-old, divorced, heartbroken comedian still waiting for the adults to show up. But the adults never show up.”

“How does this make you feel?”

Anger was the source of my discomfort. The long burn overwhelming my body caused an abrupt thaw and molecules of anger, no longer frozen, pressurized inside me to dangerously high levels.

I was angry. I walked on scorched earth and with each step there was a moan, an ache. I imagined this stirring as what environmental scientists and climate experts must feel when they witness entire species wiped from existence or when ice caps calve and dissolve into the ocean. They can shout their knowing for all to hear, but they can’t stop the progression. My anger was waking up to plastic straws lodged in sea turtles and exhausted polar bears swimming. My anger was navigating life beyond the tipping point, witnessing the unstoppable fallout, and knowing this was nature’s way of starting over. Anger was like a clear-cut forest, and Cathie was inviting me to step on a stump and connect with the severed roots underfoot, to reconnect with an ecology that had existed before being sawed apart. The valve snapped off, a flood of tears erupted from my eyes. Cathie watched as I emptied myself with an unstoppable downpour.

Shawn Hitchins is an award-winning entertainer who has toured throughout Canada, the U.S. and the UK. A live recording of Hitchins’s show Ginger Nation streams on OUTTv and Amazon Prime. He is also the author of A Brief History Of Oversharing.