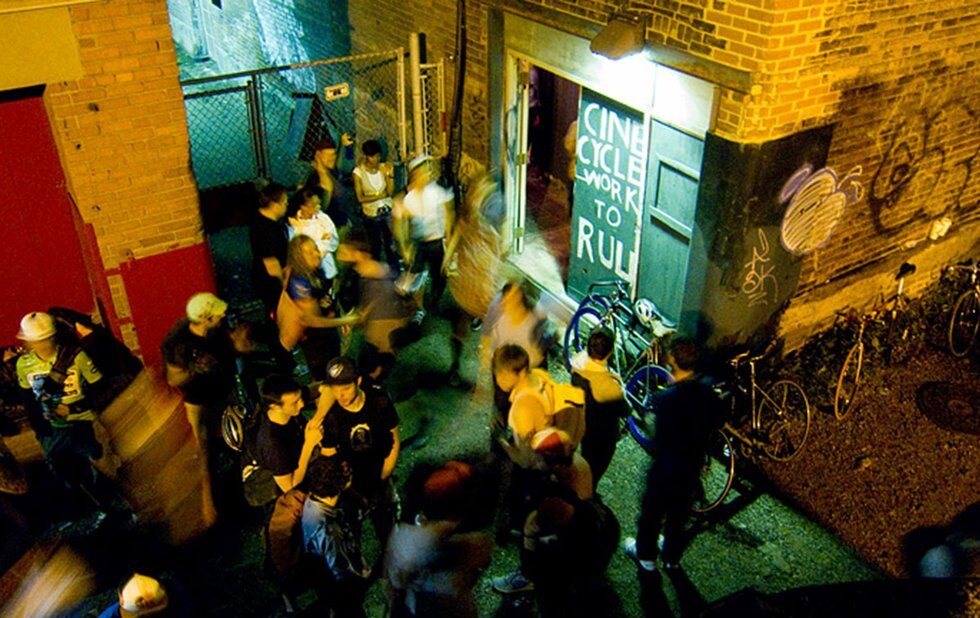 A long-running underground cinema and multidisciplinary arts venue in Toronto is rallying community support after a devastating season last fall.

According to its owner, CineCycle suffered financial losses upwards of $10,000 when businesses and event planners pulled their programming due to accusations of racism that went viral on social media.

Established by film and cycling enthusiast Martin Heath in 1991, it has been a staple of the Queen West arts scene with its experimental and political programming. In 1995, CineCycle moved from behind 317 Spadina to a small venue down an alleyway near Adelaide and Spadina, in the former coach house of 401 Richmond. In addition to film screenings, CineCycle has hosted live music, DJs, parties and exhibitions.

But all that changed last summer.

In August, Nashville-based artist and curator Taja Nicholle contacted Heath to inquire about booking a fundraiser for Black mental health services that consisted of visual arts, spoken-word performances and a raffle.

“That’s when he was like, ‘Are all you’re going to do is just drink and smoke? Is there going to be hip-hop music?’” Nicholle tells NOW. “I was confused so I asked again to make sure I heard what he said correctly. I asked, ‘Since we’re Black that’s what you think we’re going to do?’ And he said yes.”

Nicholle shared her experience on Facebook and the post went viral in arts communities in Toronto and Buffalo, New York, where she is from. 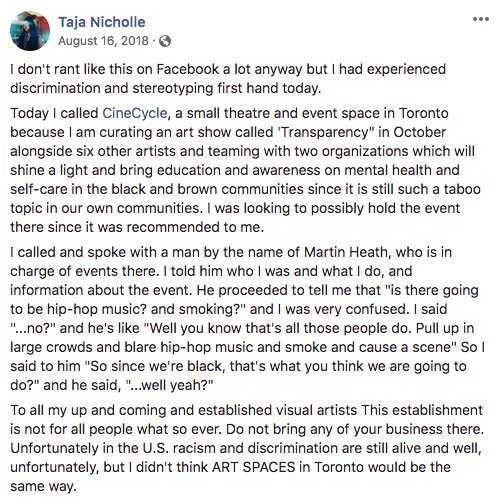 A week later, CineCycle posted a statement on its Facebook page calling the exchange “an unfortunate misunderstanding, which was understandably caused by an inappropriate line of questioning on Martin’s part.”

While the post apologized for “this error in judgement on Martin’s part,” Nicholle says she was never contacted by Martin or anyone associated with CineCycle. And after throwing a successful event at Ossington cross-fit gym Academy of Lions in October, she stopped thinking about the incident until she saw it referenced on the Save CineCycle event page.

Shoshonah MacKay, a Toronto video artist who has known Heath since 1979, created the Save CineCycle event page. She says part of the reason for the event is to “clear people’s minds.”

“Martin does not have one mean molecule in his body. He’s colour blind. Many of his friends are Black,” she says. “In Martin’s experience, Black people play loud music and smoke a lot of marijuana. He has been threatened with shutdown because of loud music and smoking marijuana, so that’s where he’s coming from. His question was a practical one.”

Reluctance by Toronto venue owners to host Black-organized and -centred events is not a new problem. In 2018, Kensington Market’s Supermarket owner Greg Bottrell told NOW that it’s their policy not to book rap and hip-hop shows because “the hip-hop thing is way too loud.”

Other Afro-Caribbean arts and culture gatherings including Afrofest and Caribana-related events have faced threats over noise complaints.

“It was not any intent of racism. Racism is a very strong word,” says MacKay. “People are using it very casually, but racists do bad things. Martin Heath has done so much for so many people in the world.”

But some are insisting Heath hasn’t done enough and that the response to Nicholle’s post is evidence of deep-rooted racism.

“Actions speak louder than words. What actions has Martin taken to address his racism, prejudices and stereotyping?” David Edward Oliver, a member of Toronto’s cycling community, wrote on the event page. “The post claiming it was an ‘unfortunate misunderstanding’ doesn’t really cut it. I’m talking about actual constructive things that Martin has done. What has been put in place to ensure that this doesn’t happen again?” 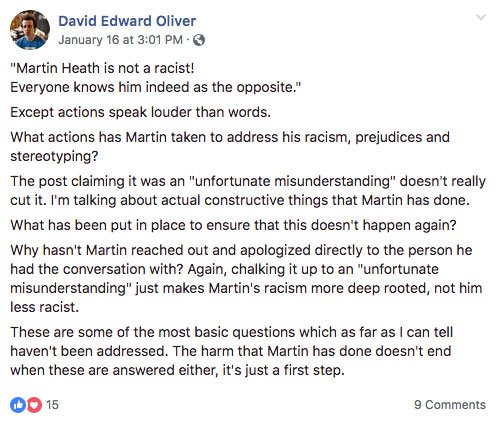 In addition to rallying around Heath and CineCycle, the event is also a fundraiser. The Facebook event page states Health, who is in his 70s and doesn’t have a computer or email, lost $20,000 in business following Nicholle’s post. However, Heath’s calculations are more modest. He says CineCycle lost $10,000 in business and private investors currently support him so the venue is not in jeopardy of closing. Instead, he hopes the benefit draws a full house – the capacity is 100 – for the films he’s programmed.

One of the long-running programs that left was Pleasure Dome, an artist-run collective for film, video and experimental media. The group held events at CineCycle multiple times a year, but relocated to other venues at the end of October 2018. In an emailed statement to NOW, Pleasure Dome’s operations and development manager Theresa Slater declined to comment.

Heath has kept quiet since the incident, and he declined to comment on it to NOW. All statements posted online in defense of Heath were made by his friends and colleagues. MacKay says upon hearing Nicholle had secured an event space, Heath wanted to apologize to her in person, but he said he was advised not to.

This isn’t the first time an online post published by one arts community member about another has created a divide.

Last November, queer theatre Buddies in Bad Times faced a similar situation when co-founder and playwright Sky Gilbert published a controversial poem online attacking transgender artist, author and musician Vivek Shraya a week before one of Gilbert’s own plays was scheduled to be read at Buddies.

While Shraya didn’t react on social media, many in the city’s queer arts community did, noting Gilbert’s privilege as a gay white man over Shraya’s position as a trans woman of colour. When Buddies decided to cancel Gilbert’s reading, there was clearly a generational divide between those rallying support for Gilbert and folks who spoke up on behalf of Shraya and other artists of colour.

At the Long Table discussion that replaced the reading, moderator Donna-Michelle St. Bernard asked: “How can we, as an intergenerational queer community cherish all that makes us different and conquer all that makes us afraid?” Some answers to that question included holding those with white privilege accountable and ensuring they create safer spaces for marginalized folks. One speaker noted that continuously educating oneself on race- and gender-equity issues is vital, especially if you’re a business owner or a person determining access to community spaces

However, those rallying around CineCycle hope that Heath’s decades-long service to the arts community speaks for itself.

“It just breaks my heart to have this happen to him. It’s wrong,” MacKay says. “People who are intelligent artists are actually being assholes.”

Nicholle sees the situation differently. She says she’s visited Toronto and participated in its arts community enough to know that bigotry has no place in the city.

“Toronto is way too diverse to tolerate any racist business,” she says. “If you go to this event, you might as well give Donald Trump money so he can build that wall.”