For the past 10 years, its been a place to forge your comedic voice, meet your comedy (or life) partner. 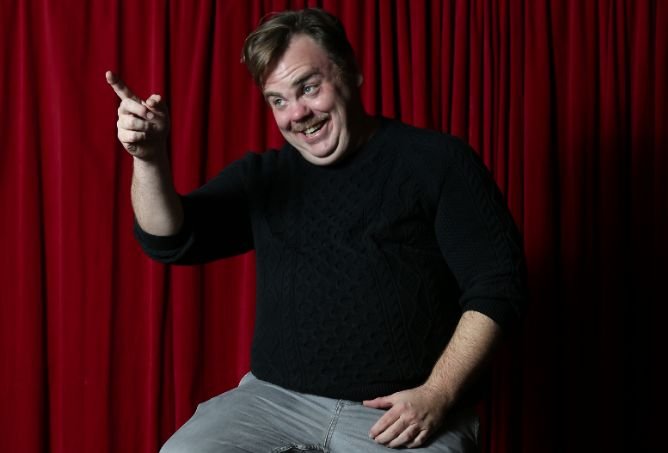 Co-owners Gary Rideout Jr. (left) and James Elksnitis: "The community really supports us we never would have made it past that first year without them." (Photo by Cheol Joon Baek)|Stand-up

For the past 10 years, its been a place to forge your comedic voice, meet your comedy (or life) partner and, above all, have a good time.

Last Thursday (November 8), Comedy Bar celebrated a decade since opening, back when the vestiges of the Eritrean pool hall it had been were still on the walls and drinks were served out of a plastic tub.

The basement space has undergone extensive renovations by co-owners Gary Rideout Jr. and James Elksnitis since then, and now houses a spacious theatre, intimate cabaret space and wrap-around main bar.

Producers and friends of the bar, especially alumni of the Sketchersons house troupe, gathered to mark the occasion, with hundreds from the comedy scene showing up later in the night to cram into, and celebrate, the space and its community.

We were just waiting for Gary to open this place after the other ones shut down, reminisces Pat Thornton, one of the original Sketchersons. It was gross in here. Dingy mattress in the back room, black light everywhere. Its different now, I like it better, he says, looking about and laughing.

Many different shows (the popular Catch23 Improv, or Rapp Battlez, which toured to Just For Laughs this summer) call the bar home, as do comedy communities.

Its knocked down barriers, says Thornton. Comics do everything now, whereas there used to be this vicious divide between stand-up, improv and sketch. I credit this place entirely.

The evolution over a decade is particularly evident looking at The Sketchersons.

I went to teachers college and am certified, but slowly, because of this place, I was able to transition to my passion, acting, as a career, says Jonathan Langdon, who was a Sketcherson for five years. After Rideout Jr. helped him secure an agent, Langdon landed work in TV commercials, eventually booking a role on the CBS show No Tomorrow.

I started producing a show here [with Steph Tolev] called LadyStache Gone Wild, and wed film an intro with every guest host thats how I learned video editing. She now works as a story editor and writer on CBCs Baroness Von Sketch Show.

The staff at Comedy Bar consider it a second home.

As as artist-run space, theyve always been so supportive when I was working as an actor, and now in publicity and marketing. Theyve always been flexible and helped in any way they could. And I joke that James [Elksnitis] curates my friends, because he hires all the best people plus the comedians, of course.

All the stories Ive been reading this week on Facebook and Instagram about people who met their partners here or think they have a career because of Comedy Bar I think they have it backward. Comedy Bar exists because of them, not because of me and Gary. The community really supports us we never would have made it past that first year without them.

Thats a sentiment that Rideout Jr. echoes when, some time after midnight, a giant cake is brought out and the rowdy crowd quiets down as he speaks briefly from atop the bar.

You can have 4,800 square feet anywhere, and chairs and a riser, but it takes all of you to make that space Comedy Bar, he says to wild cheers.

As for the Sketchersons, the troupe continues to evolve.

Were working hard to have a diverse cast in every sense in thinking, in visibility, current head writer Marshall Lorenzo says. At least a third of the current cast identifies as queer.

I have to remind myself being gay as a head writer, thats a new POV from, say, 10 years ago.

Im really excited to work with Chanty Marostica to bring Queer And Present Danger in for a regular slot. And for Big City Improv Festival, were bringing in The Black Version. Its Phil LaMarr and nine other improvisers from the Groundlings. Well probably lose money on the airfare costs, but I think its an important act.

Looking around at the crowd, Elksnitis, not an expressive man, seems happy.

It seems like our plan worked. Its become a hub, the incubator wed hoped it would be.

Thats what each comic and alumni says, too.

This place provides opportunities for people to shine, says Langdon. It did that for me.