Comedy reviews: what if you laugh and no one hears it?

A stand-up show live-streamed from P.E.I. and a sketch comedy festival brought much-needed laughs this week 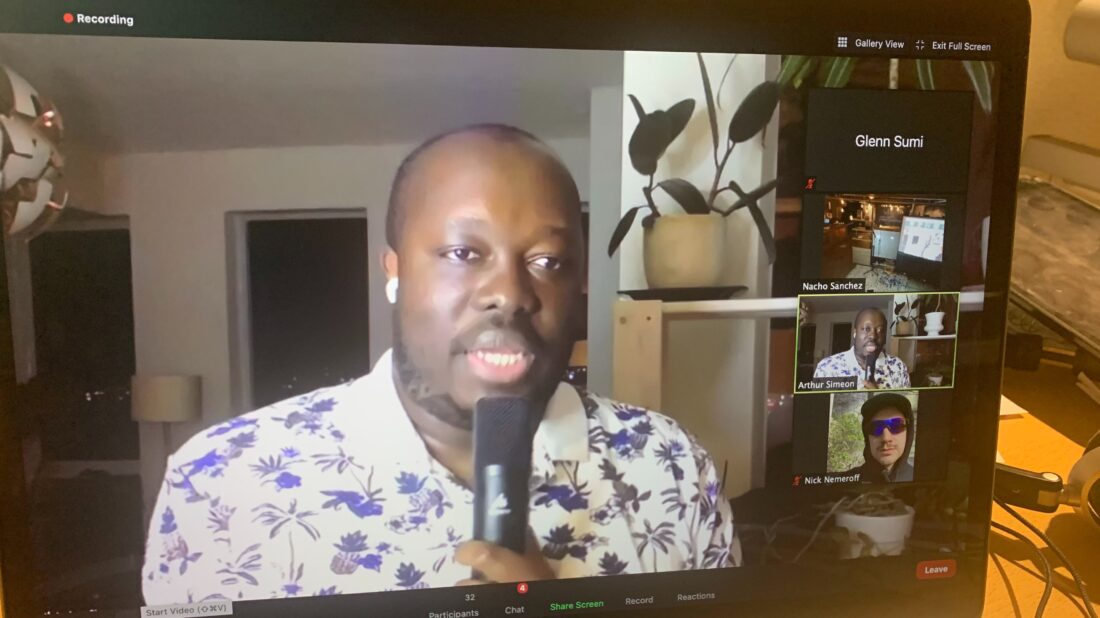 Arthur Simeon proved good jokes work whether in person or through a monitor.

Of all the arts affected by the pandemic, I think live comedy has suffered the most – at least as an experience. Sure, you need audiences for concerts, theatre and dance shows, but without people laughing, clapping and whooping it up, live comedy basically falls apart. Its raison d’être is gone.

The truth of that hit home this week when I experienced two different kinds of comedy: a stand-up show performed for a hybrid live audience and Zoom crowd, and a sketch comedy festival full of pre-taped videos.

I was most intrigued by the live show, since more than anything I’ve been curious to see how stand-ups – society’s genuine truth-tellers – have responded to this crisis. Plus, since most Canadian cities aren’t safe enough to have indoor comedy any time soon, I also wanted to see how this experiment worked. It could be the future of the art form for a while yet.

Presented by Comedy Records, the show was anchored by a live, in-person set at Bar1911 in Charlottetown, P.E.I., where COVID-19 cases are low enough to have indoor shows (maximum 40). Clare Belford, who’s from P.E.I., hosted, with a ceiling camera capturing her act – and that of her fellow islander Dan Hendricken, from above.

Meanwhile, a big screen behind her showed people in the Zoom audience, including the other comics on the lineup. Originally, we were told to leave our microphones on so the performers could hear our laughter, but right before showtime it became clear there was a technical issue – that dreaded echo effect. So we were muted.

When the comics on Zoom performed, their mics were turned on.

Depending on what view you were watching, you couldn’t always see your fellow comedy lovers. I would toggle between speaker view, to focus on the comic, and gallery view, to see people’s reactions.

Not everyone left their video cameras on. But for those who did, a funny thing happens when you can be seen and not heard. You start performing for your camera. In a dark theatre, no one cares what you look like – unless you’re in the front row and your arms are crossed, in which case the stand-up will often comment on it, or you’re talking or checking your cellphone.

But when your face pops up onscreen, it’s harder to act natural. Early on in the show I found myself putting on a half-smile so I would look like I was enjoying myself and was ready to laugh. When I did find something funny, I made sure my facial expression showed that. I was more self-conscious than usual, and as the night went on, that got tiring. At times, especially during set-ups, I fidgeted. When I didn’t like a particular comic (I’m not naming names), I briefly turned off my camera.

The thing is, at a normal comedy show, when everyone is in the same room, breathing the same air, a groan or nervous giggle or someone’s mid-set bathroom break can change the entire vibe of the room.

Of the comics, only Dena Jackson seemed to take advantage of the surreal situation and addressed individual audience members – the pandemic version of crowd work. That added a wild bit of unpredictability.

As far as the comics’ material goes, it was a terrific show, with standouts Jackson, Nour Hadidi, Nick Nemeroff and headliner Arthur Simeon bringing much-needed laughs to our difficult times, even though they couldn’t fully bask in our appreciation.

Back in March 2020, Toronto’s SketchFest was one of the last things to happen before the first pandemic lockdown. And this year’s edition, which wraps up on Sunday, is its first as an all-virtual version.

I took in two programs on the fest’s second night: the first a collection of digital shorts, the second a showcase focusing on sketch acts. What’s clear is that everyone’s ramped up their digital game this past year.

Difficult to take in

My main issue with the curated program is that there was so much great content – and so much of it tonally different – that it was difficult to take in all at once. And because the program is streamed live, it doesn’t offer a way to rewind something to savour a line or gag. It would have even been nice to watch a live host comment on some of the videos and let us catch our breaths between such vastly different works.

That was less of an issue with the sketch showcase, because we often got to see two or three sketches by troupes like High Heel Bikini and Joy Provision, and so got used to the performers and their themes.

The clear standout in this program was Jon Blair, whose Now More Than Ever web series has already amassed a loyal fan base on YouTube. Sending up genre conventions as brilliantly and as originally as SCTV did decades before him, Blair has mastered the solo sketch format. It’s hard to believe he’s produced these videos by himself in quarantine. Now that he’s got technical and production skills in his tool kit, I can’t wait to see what he does when the pandemic’s over.