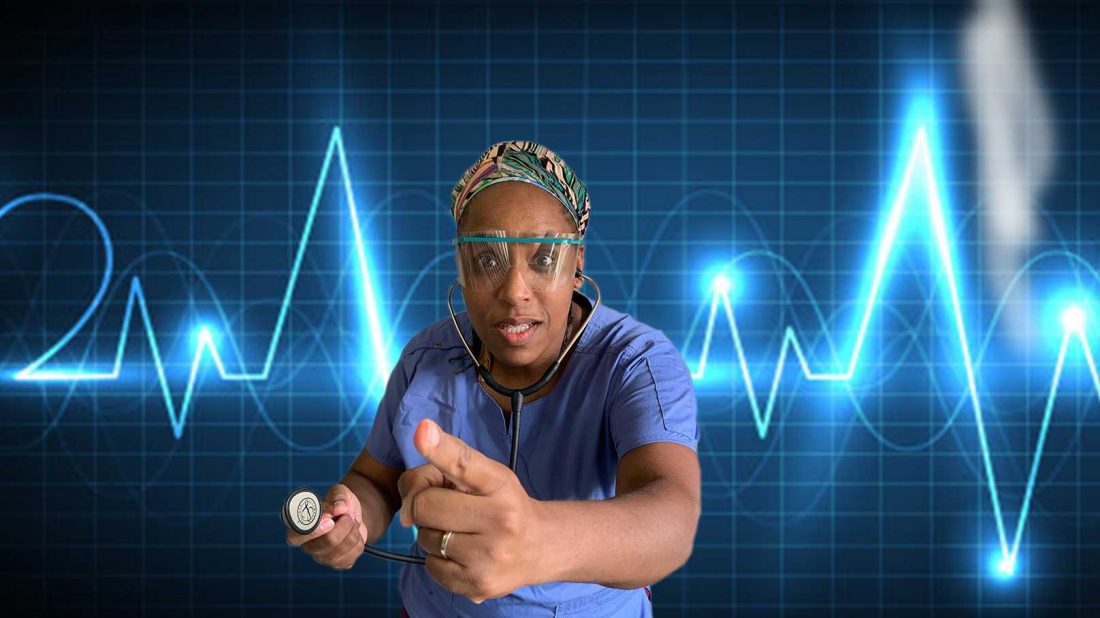 Stand-up and RN Zabrina Douglas is ready to cure what ails you with Laughter From The Frontlines.

Over the past year and a half, we’ve all read and seen a lot of stories about health care workers doing their best on the front lines of the pandemic. It’s serious, life-and-death stuff. But now there’s a comedy show where some of those workers get to laugh amongst themselves – and entertain others about what they’re going through.

“It’s such a stressful environment that we all need laughter,” says Zabrina Douglas, a stand-up comic and registered nurse, who headlining Laughter From The Frontlines, a virtual show featuring comedians and storytellers in the healthcare industry.

“There have been times when I’ve worked every day. And the only relief I’d get would be sharing stories and cracking jokes with other staff at the front desk or in the break room.”

If you think you have problems with anti-maskers, imagine being an RN and having a COVID-19 patient spew conspiracy theories about masks.

“One time I was taking care of somebody who was an anti-masker and his oxygen levels were going down,” says Douglas. “He kept saying, ‘This is the government!’ and I was, like, ‘Well, your oxygen is dropping, so I don’t think so.'”

Laughter From The Frontlines is being produced by The Unknown Comedy Club. Founded a few months ago by comics Daniel Woodrow (in Toronto, pictured below) and Rodney Ramsay (in Montreal), the virtual club has gained a loyal fan base for its high-quality shows that go way beyond your typical, twitchy Zoom shows.

Co-founder Daniel Woodrow hopes The Unknown Comedy Club continues even after the pandemic is over.

“We wanted to make the club as close to a real-life show as possible,” says Woodrow. “We really focus on having audience interaction and smooth transitions. There’s even a DJ before the show. For the comics, there’s nothing like having an audience respond to your act. At some Zoom shows, when you can’t hear any reaction, it’s like performing to a wall.”

Ramsay, a virtual reality aficionado, often hosts the shows as an avatar, engaging in lively crowd work to get people relaxed. Before the show, you’re asked to turn on your camera and microphone and reduce background noise. Woodrow says once Ramsay starts hosting and making everyone feel comfortable, more cameras and mics turn on.

The Unknown Comedy Club is Black-owned and run; Woodrow and Ramsay have produced the Underground Comedy Railroad Tour during Black History month for several years. That perspective has likely influenced their approach to programming.

“I hate when I go to a show and there’s just one type of comedian,” he says. “We try to book shows with lots of variety, that represent different views. We want to make sure that west coast and east coast comics are on, that the comics are brown or black or white. We want a healthy mix. We know that many times minority groups get overlooked in comedy, and so we focus on having diversity in our bookings. But I think anyone that produces a proper show should be doing that.”

Back in May the club put on an I Heart Asians show featuring Jen Sakato, Keith Pedro and others to help raise awareness about anti-Asian racism, as well as a Mother’s Day show featuring funny moms. Woodrow and Ramsay have a couple more themed shows coming up.

With vaccination rates increasing and things cautiously reopening, the two aren’t necessarily looking at turning the club into a physical space. For one thing, they live in different cities. For another, they can do things online that would be impossible to achieve in person.

“We’ve had shows with a comic from L.A., Vancouver and somewhere in the UK, and we don’t even notice because everyone’s in the same room performing,” says Woodrow. “That show could never exist in real life unless you spent thousands of dollars. You don’t have to pay for flights. Maybe a comic has just had kids and can’t travel. It doesn’t take up a lot of their time.”

(Side note: Douglas says she’s even done a 10-minute set in her hospital break room, telling co-workers she’s getting a coffee and making a phone call.)

Woodrow says their comedy club shows aren’t much different than a livestream on Twitch or YouTube. He describes the comedy shows as a hybrid experience, part live show, part Zoom show and part TV.

“We’re on Zoom, but the way we do transitions makes it feel like you’re watching TV,” he says. “We’ve had some audience members fart or burp super loud, forgetting they’re on camera and mic. And it’s created some of our funniest moments. There’s nothing like getting heckled by a really loud fart.”