How To Build A Solid Sketch Troupe

If youve been attending the Toronto Sketch Comedy Festival, which closes this weekend, you have a good idea of what. 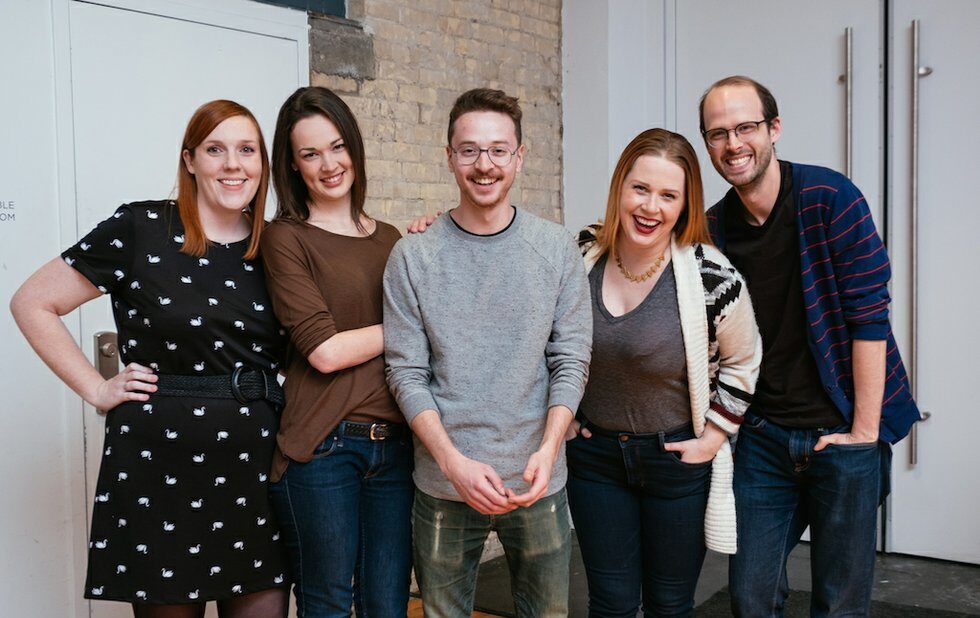 If youve been attending the Toronto Sketch Comedy Festival, which closes this weekend, you have a good idea of what makes a successful comedy troupe. Theres no magic formula, of course, but the best ones have some things in common. Im using one of the most exciting ensembles, the five-person Dame Judy Dench, to see whats essential. The stars of several sold-out Fringe revues, including last years Everything Else Is Sold Out, play one more show on Saturday (March 11) at the Theatre Centre. torontosketchfest.com.

The women in the troupe Claire Farmer, Jessica Greco and Shannon Lahaie came up with the jokey name when they met in their Second City conservatory class and put on their first show as a trio. We almost came up with Dame Maggie Smith, says Greco. Just because we liked the joke of Welcome to the stage… Dame Maggie Smith… or Dame Judy Dench and then disappointing people when we came out. When they expanded to include fellow classmate Gavin Pounds and friend Chris Leveille, they kept the name. To this day, a few patrons look confused at the shows. And the group occasionally get requests on social media to sign petitions as Dench. But if youll notice, the first name of the Oscar-winning actor is spelled wrong. Thats intentional. Farmer is a lawyer. Of course I thought of that, she says.

Theres nothing more boring than sketch members who all do the same shtick.

Thats not the case with DJD. Farmer is a litigation lawyer who was advised to take an improv class to improve her on-her-feet skills. Greco had been in film and TV for 20 years and wanted to be seen as funnier by the industry. Lahaie studied theatre but always longed to do comic scenes. Pounds studied broadcasting and improv and saw a Second City brochure at a job fair. Leveille, who has degrees in math and drama, had an intern job near the Second City training centre and always wondered what it would be like to improvise. Hes been doing improv and sketch ever since.

That range helps them keep things fresh, says Lahaie. We have different ways of seeing the world, and different things we want to do with comedy.

We have five different voices, performance styles and backgrounds that work wonderfully together, says Greco. And when you put five very different ingredients into a pot, youll often get something a bit strange.

Theres no ego involved in writing and holding onto material, says Farmer. Someone who comes up with a premise doesnt necessarily feel territorial about the final product after its been altered. And if a bit isnt working, theyll frankly say so and drop it or finesse it. None of us is super-precious, she says. Every director weve had has found it so strange when it comes to whittling down our material, because well cut something before they do.

According to Lahaie, the troupes motto is funniest wins. That said, if even one of the five finds a sketch offensive, its taken off. Thatll mean people in the audience will, too, says Greco.

DJD have had some absurd scenes one features Farmer in a pizza costume, for instance, and Pounds frequently shows up without a shirt but theyre grounded in logic.

We always make sure things make sense in the world were building, says Leveille. Why would this character do this? The jokes always have to fit in the context.

Lahaie agrees. Are we saying something because it builds a scene up or just because its funny and were throwing it in?

That applies to endings as well the weakest link for most aspiring sketch troupes. Anyone can come up with a good premise, but knowing how to land it is an art form.

Even if you had the funniest, smartest premise, says Farmer, if the sketch just peters out you lose everything that came before.

This isnt exactly glamorous, says Greco. Besides the glory of getting applause, theres paperwork, fundraising, publicity, applying to festivals. Were doing it because we enjoy the work, enjoy each others company and making people laugh. If any of that stops being true, then we probably wont do it any more. If youre not having fun, take up another hobby.

This fact comes up continually. Tech people essentially volunteering their time will be happier with a box of Timbits, says Greco. And writing meetings, says Pounds, are potlucks where people bring everything from pies and chips to ketchup-flavoured Doritos.

We basically bring diabetes to the table, says Greco.