NOW MagazineCultureComedyThe joke’s on me: why I decided to try stand-up comedy

The joke’s on me: why I decided to try stand-up comedy

Did you hear the joke about the journalist who tried stand-up comedy? I made my debut at the Comedy Bar. 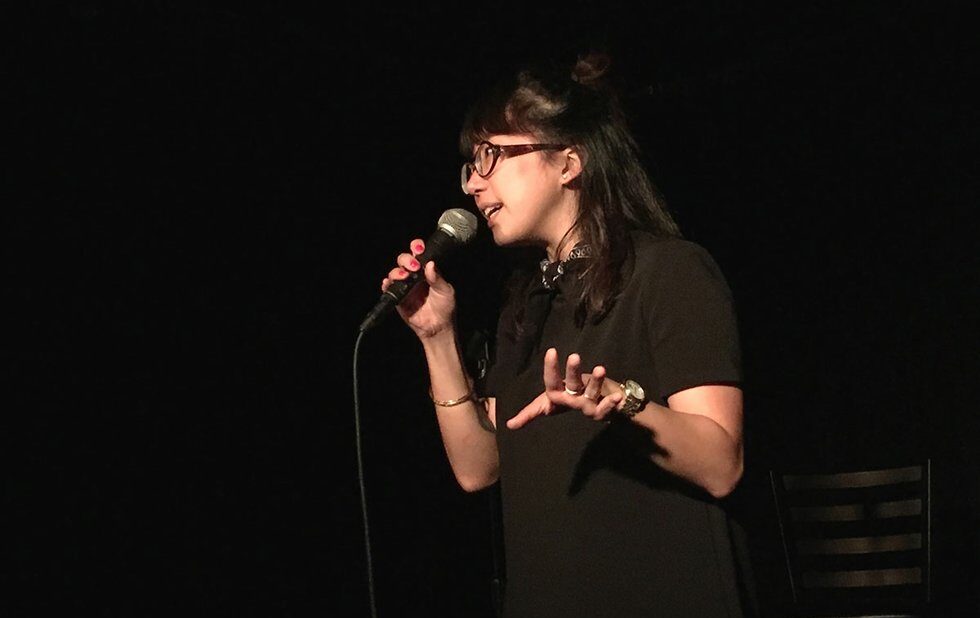 Did you hear the joke about the journalist who tried stand-up comedy?

I made my debut at the Comedy Bar on August 30. Yes me, a journalist who until eight weeks ago had no idea how to write or tell a joke.

Sure, Id watched my fair share of Netflix specials and spent a bunch of my hard-earned dough at comedy clubs, but I never thought Id be on stage myself until this summer when I signed up for Comedy Girl. The level one beginners course is an all-women program taught by pro stand-up Dawn Whitwell at Comedy Bar. Its a supportive, safe space to try what most people would consider terrifying.

Youre probably wondering what would compel a person to do this. After all, weve all seen comics bomb terribly. Why put yourself through potential public embarrassment?

For many people in my class, a life-changing moment prompted the leap of faith. There was a woman whod just moved to the big city, another who didnt get into grad school.

I had recently called it quits with my partner after 10 years together. I needed something to jolt me back to life.

Honestly, I just needed to laugh.

About a week before our first class, Whitwell emailed asking us to bring a story to share. There were no requirements except that it had to be true. After an introduction to the course and being encouraged to order a drink from the bar a little liquid courage never hurt I told the class about the time my family auditioned for a cheese commercial when I was a kid. It got a few laughs.

So whats this story really about, for you? Whitwell probed.

Id learn, after a few weeks, to ask myself this question about all my stories to help identify the heart of a joke.

I guess its about how my family is mixed race and people often dont believe that my name matches my appearance, I answered.

Great, so write about that, Whitwell said.

Week after week, wed be sent away with homework, which no one dared to skip because that meant youd have nothing to share the next class. In fact, Whitwell cautioned us at the start, If youre looking for a comedy class with no homework, do improv. With stand-up, you have to work on it constantly. I suppose some classmates took that to heart, as attendance dropped from 12 people to eight over time.

I kept a notebook of all my ideas, wrote and rewrote stories, tightened those stories into bits, and eventually learned to craft jokes.

As a journalist, it wasnt difficult to come up with ideas, but writing for listeners rather than readers was a challenge. Learning to listen for laughs was also new.

Did you hear that? Whitwell would often interrupt as someone told a joke. They laughed. That was funny. Make a note of that.

I got better at noticing funny things around me everyday, too: an unusual exchange online, a weird thing that happened at work, and even conversations between strangers. Comedy was all around me, and I even began to see the humour in my own life.

After six weeks of sitting around writing, it was time to practise onstage and I was petrified. As a teen, I had done some musical theatre, but stand-up was completely different. Id be alone and not reciting lines in character, but performing my own jokes as myself no costume or wig to hide behind.

The lights onstage felt too bright and my voice, amplified by a microphone, sounded squeaky and grating. I had trouble memorizing all five of my jokes, so I clutched a notebook in my shaky hands. Worst of all, after weeks of telling the same jokes over and over, they didnt sound very funny anymore. I left the final class unsure if I should invite anyone to the grad show the following week.

I practised a lot in my living room, my cat my reluctant audience. She heard me tell that anecdote I had shared the first day of class, which, after two months, had been rewritten as a smaller part of a larger joke on race and identity. I recited my jokes in the shower, as I walked to and from work and while I cooked dinner. I went to a show at the Comedy Bar a few days before mine in hopes it would get me pumped (it did), and on the day of the show, I listened to my favourite comedy podcast, which put me in the mood to laugh.

An hour before doors opened, we took turns rehearsing onstage one last time. Then it was time to go on.

My friends, family and even two NOW co-workers showed up to cheer me on, and after many of my classmates took the stage, I was up. Within seconds, I got a laugh and my nerves settled. I found myself excited and having fun, which surprised me. The tight five I had prepared felt like a minute, and before I knew it, I was placing the mic back in the stand.

I walked offstage buzzing and greeted by high-fives from my classmates. It was possibly the happiest Id felt all summer. Not only had learning to notice, write and practise comedy jolt me back to life, but it put me in the company of a great group of supportive women.

Afterwards, I met my friends and family in the lobby, still feeling drunk off the applause.

That was incredible, my sister said.

I know, I replied. I signed up for level two.