NOW MagazineCultureComedyLaughing about peeing during the pandemic 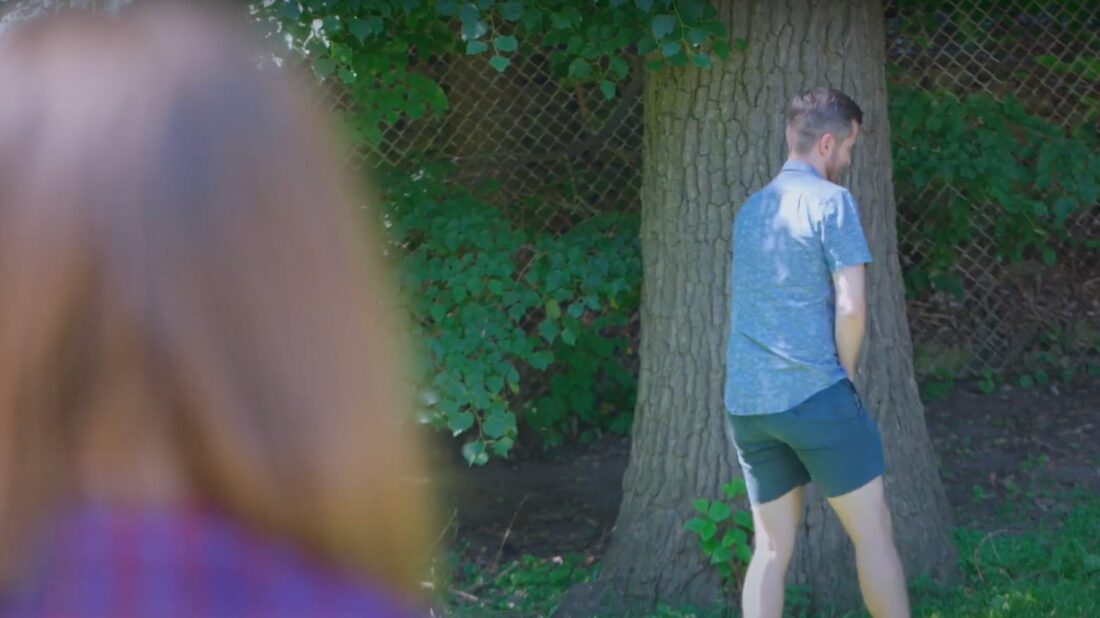 Natalie Metcalfe looks on in frustration as Christian Smith relieves himself.

Second City Toronto shows might not be happening live right now, but that doesn’t mean its cast isn’t getting laughs. Mainstage cast member Natalie Metcalfe just released a hilarious YouTube sketch featuring some of her Second City colleagues about something we can all relate to, but especially women. With the city’s public restrooms closed during the pandemic, what do you do about peeing?

The three-and-a-half-minute scene concerns a woman (Metcalfe) walking in a park who gets fed up when she sees a guy (Christian Smith) relieving himself near a tree.

“It must be nice to just pee wherever you want during a pandemic,” she tells him. He, of course, tries denying what he was doing.

“Everywhere I go now it’s just dudes dicking out,” she continues, “just pissing wherever they want.”

When Smith says that’s not true, the camera cuts to SC cast member Alan Shane Lewis approaching a tree, doing his business and then finishing with a zip-up ritual that also gets gently satirized.

Metcalfe, who directed the short film with Danny Nash, includes great details about having to plan one’s whole day around where a washroom is. The sketch also skewers bro culture. Smith, Lewis and Chris Wilson down beers, which of course leads to more… you know what.

And the finale is so funny it could make you – you knew it was coming – pee your pants laughing.

This is just one example of Toronto’s comics satirizing our bizarre lives during the coronavirus pandemic. A few months ago, after the controversial kiss scene between strangers happened during a live news spot at Trinity Bellwoods Park, Rodrigo Fernandez-Stoll skewered it savagely here.

We need comedy more than ever. And if we can’t get it live, it’s good to know we can get it online. In the meantime, try not to chuckle thinking about this video next time you’re peeing during the pandemic.