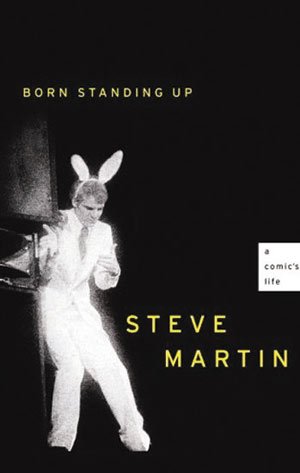 If youre at all interested in stand-up, you need to get your hands on a copy of this book. Steve Martins account of his 18 years in the business 10 years spent learning, four years spent refining, four years in wild success makes absorbing reading, full of the absurd humour and unsparing honesty of the comics best work.

The former wild and crazy guy began his show business career as an aspiring boy magician who sold guidebooks at Disneyland, graduated to corny melodramas in a semi-professional theatre and then entered stand-up (while studying philosophy on the side) with some props and a banjo. He was lucky. In the late 60s, the old comedy guard was changing and the guy with the arrow through his head offered audiences something fresh.

Although he says hes blocked out these early years, he demonstrates terrific recall: how he dealt with hecklers, how much he got paid, how some of his famous routines evolved. And there are amusing anecdotes about the kindness of strangers along the way, some famous (Ann-Margret, Elvis, the screenwriter Dalton Trumbo), some not.

When success finally comes, via The Tonight Show With Johnny Carson and one beautifully timed appearance on the year-old Saturday Night Live, you can feel Martins relief. And gratitude. He realizes it was as much about timing and perseverance as it was about talent.

He never descends into fuck-and-tell mode, although he says that during the free love period, intercourse, or some version of it, was a way of saying hello. Theres also a self-effacing anecdote about his nine dates with singer Linda Ronstadt.

Martin is candid about many things, including his anxiety attacks, his hypochondria and his periods of depression, which often came in the midst of success. What makes this book so touching, however, is his account of his strained relationship with his father, a taciturn real estate salesman who had showbiz aspirations of his own.

This well-written book cant excuse Martins recent silly movies like The Pink Panther or the Father Of The Bride sequels. But it does shed light on the mystery man behind one of the most enduring comedy careers.