Review: Welcome Back To The Future exceeds expectations

First Second City show in new Comedy Bar Danforth venue is one of the sharpest, funniest revues in the canon 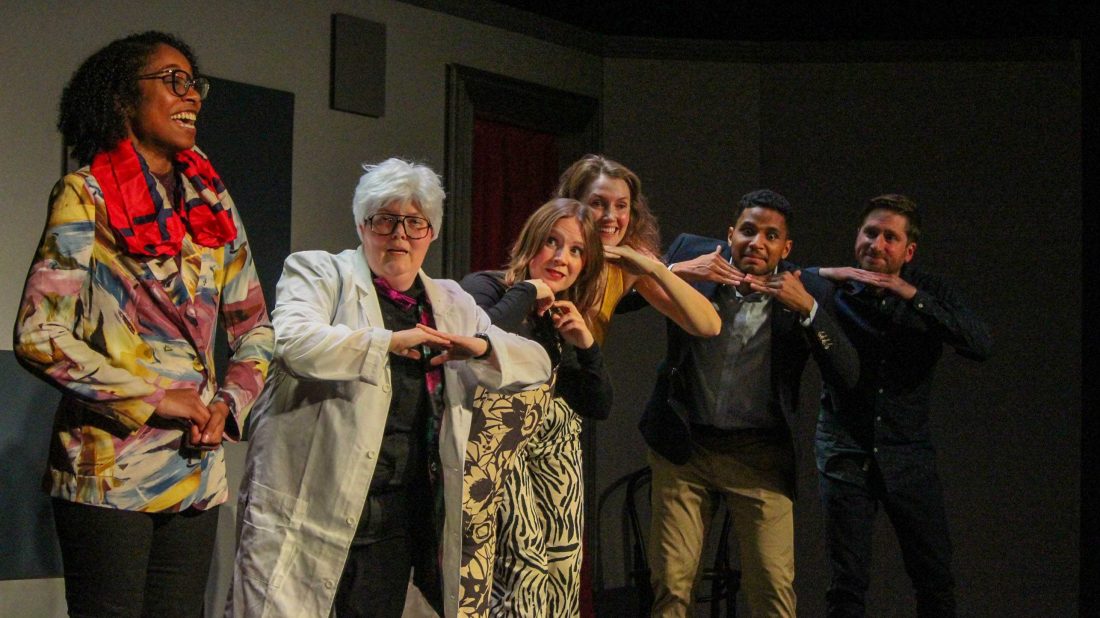 Expectations are high for Welcome Back To The Future. Not only is Second City’s latest revue the first mainstage show to be performed in the company’s interim space, the shining new Comedy Bar Danforth. But it’s also the first big sketch show to be seen in Toronto since theatre capacities increased to 100 per cent.

Well, I can confidently say the show exceeded my expectations – and not just because I haven’t laughed this hard at anything that wasn’t on a screen in 21 months. From the rousing, cathartic opening number and a clever and relevant recurring bit about problematic Canadian politicians to a deadly serious look at race, it’s one of the sharpest, funniest revues in the canon.

After the catchy, variety special-style song at the beginning, the show begins with a destined-for-classic sketch about a woman (Nkasi Ogbonnah) and her temperamental computer (Chris Wilson) that will have you howling in recognition. Wilson, affecting a surfer dude voice, is the coolest anthropomorphized object ever; he’s like a Pixar character come to life. Hannah Spear and Tricia Black also show up, but to explain who or what they play will spoil the surprise.

The ensemble shows off their improv skills throughout the show. One of the best sketches features Natalie Metcalfe and Scott Yamamura (filling in for Andrew Bushell at the performance I saw) as a recently divorced couple who happen to also be divorce lawyers representing clients plucked from the audience. In an added bit of pandemic-approved participation, the audience members must use charades to provide information, which the lawyers misinterpret and use against each other. It’s a high concept premise brilliantly executed, with musical director Ayaka Kinugawa underscoring the dramatic beats in the scene for maximum effectiveness.

Another great improvised scene riffs on Fox News. After the network is taken over by different entities (cue audience suggestions), the actors provide different slants on their beats. (This works much better than another sketch sending up corporate sponsorship in the second half, the only scene in the show that fell flat for me.)

And the silliest but most endearing improv scene features Black and Spear as twin fortune tellers dispensing advice about career and love to various audience members. Because they’re twins, they have to speak in one voice, and their pronouncements are unpredictable and hilarious.

For sheer physical comedy, it’d be hard to top Spear’s performance in a scene in which she interrupts a couple (Wilson and Metcalfe) making out in an apartment. And the ensemble scenes work beautifully. Everyone gets a chance to shine, including Metcalfe, who’s five or six months pregnant and onstage – a SC first.

If, like millions of people, you’ve had a hard time falling asleep with so much going on in the world, you’ll relate to the sketch featuring Black as an insomniac and Yamamura as an imaginary game show host keeping them up thinking about all the embarrassing, regretful things they’ve done.

Black, who’s clearly one of the show’s breakout stars, devours their scenes, which include a sharp, outrageously dramatic bit about heteronormativity in Moxie’s and a clever song about being a “gender alien.”

Wilson, the other standout, gets two contrasting sketches riffing on toxic masculinity. In the first, he plays a coach who uses every sports metaphor in the book to (as he sees it) help his wife (Metcalfe) “battle” her cancer. Credit the two actors and director Paloma Nuñez for making this scene work on multiple levels. In the second scene, he plays a dad who coaches his football-playing son (Yamamura) on the importance of not internalizing his emotions.

The sketch that everyone will be talking about after leaving the show, however, is the one in which Wilson and Ogbonnah play an overworked couple who decide to role-play to spice up their weekly “sex night.” No doubt this premise has been explored before, but not through the lens of anti-Black racism. Nuñez and the actors, particularly a nuanced Ogbonnah, turn this into a miniature play that, like all great comedy, is more interested in exploring human truths than in generating laughs.

It’s one of the boldest, most uncompromising things I’ve seen on a Second City stage. And in an uncertain time it bodes well for the company’s future.