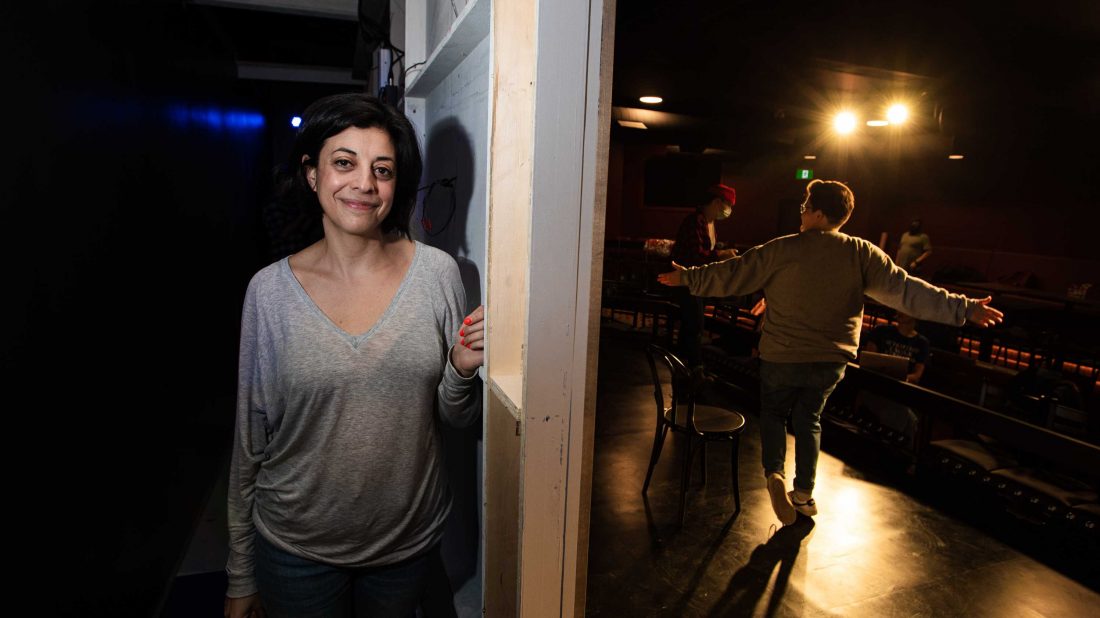 Paloma Nuñez vividly recalls the first time she stepped on a comedy stage after more than a year of pandemic closures. It was at an improv show called Nice Time at Comedy Bar, and her fellow improvisers were ace comics Nicole Passmore, Mark Little, Dan Beirne and Lisa Merchant.

“I felt like a little kid – it was so much fun!” says Nuñez. “I remember thinking, ‘Wow, we just made something up together.’ I had forgotten what that felt like, and it was exhilarating.”

Now she’s on the verge of something even more exhilarating: directing her first Second City mainstage show, Welcome Back To The Future, one of two big revues inaugurating the comedy institution’s new temporary home at Comedy Bar’s sister building on the Danforth. (The other show is Second City’s holiday-themed Tour Co show, The Fast & The Furiously Festive.)

Second City’s Welcome Back To The Future cast rehearses 48 hours before the show’s first preview.

“It’s fun to work with this calibre of talent,” says Nuñez, in one of several brand new rehearsal rooms at Second City’s training centre, which has been active for the last couple of months while the theatre was being built (see building photos below).

“I’ve worked with students before and lots of up-and-coming talents. But being able to have an idea of how a sketch should go, and then watching such a great ensemble elevate it, is great.”

As a mainstage alumna herself – she starred in Second City’s 2017 revue Everything Is Great Again and was part of the massive hit She The People – Nuñez knows about elevating terrific material. With her husky voice and big, expressive peepers – perfect for giving another character some serious side-eye – she’s always come across as grounded, relatable and spontaneous. (She’s also a familiar face on film and TV, appearing in Baroness Von Sketch Show, Spotlight and Mouthpiece. She’s got a nice role as a pirate in next year’s big Disney live-action film, Peter Pan & Wendy.)

View through the new box office area at Comedy Bar Danforth, 48 hours before it officially opens.

While a few Welcome Back To The Future sketches have been taken from Second City’s last revue, the little-seen (because of lockdowns and audience capacities, not quality) CERB Your Enthusiasm, most scenes are new. And what was it like creating comedy when society seems more divided than ever?

“My comedy philosophy is always to tell the truth,” she says. “It sounds cliché, but comedy is like the sugar to help the medicine – or message – go down. These last two years have been very eye-opening about what our society is: what priorities people, politicians and corporations have. So it’s important that we reflect on that, think about it and look at who we are, but all through a comedic lens. We can’t shy away from any of that.”

Increased sensitivity around creating in a safe work environment is now an important part of the Second City process.

“No one will be put in a sketch if they feel uncomfortable about the material or the characterizations,” says Nuñez. “Everyone received the scripts before we started, so people can address any issues or concerns they might have. Then we can either recast something or pick a different sketch.”

While the final show will be finessed and tweaked during previews, some topics include race, the apocalypse and various kinds of relationships.

“There’s a sketch about our relationships with computers, and how much more intimate it is now than it used to be because of Zoom,” says Nuñez, laughing.

While all cast, crew and audiences need to be vaccinated against COVID-19 to be in the building, that doesn’t necessarily mean a sketch will make fun of anti-vaxxers.

“I want to make sure we’re not black and white about any issue, including vaccines,” she says. “There’s a whole spectrum of people who aren’t vaccinated, from those who have some hesitancy to, well, QAnon. We don’t want to clump everyone in.”