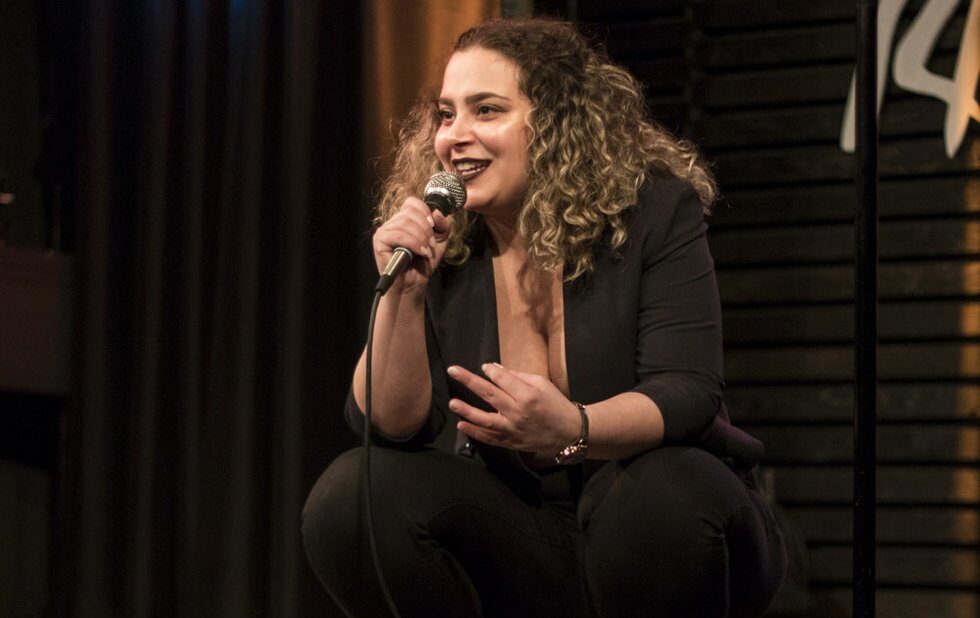 While many comedy shows rely on shock value to unhinge their audiences, SHADE is not one of them and it has sold out five months in a row.

The night is a showcase for women, queer and people of colour comics such as DeAnne Smith, Martha Chavez, Flo & Joan and Sammy Farid.

It started earlier this year when comedian and producer Anasimone George realized she was too broke to be working for drink tickets in spaces dominated by white men. So, after three years on the stand-up circuit, she took matters into her own hands.

While the comedy scene in Toronto is becoming more diverse, if two or more people of colour are on a bill, it will often be trivialized as a people of colour show. The same goes for shows with multiple queer people or women.

With SHADE, George flips that narrative by centering and celebrating diverse performers while paying them for their time. The showcase also eschews racist, sexist, homophobic and transphobic humour still typical in the citys comedy clubs.

NOW spoke with George about her inspiration for the night and her plan to take SHADE on a fall tour of university campuses.

What do you love about comedy?

I love that an entire room of strangers can connect on such a vulnerable level through laughter. You let your entire guard down when you laugh. For me to be able to make people laugh is wild because Im literally talking about myself or moments Ive experienced, and random people Ive never met before decide to laugh. Its weird. Its cool. Its humbling.

How has it felt going to mainstream comedy shows as a woman of colour?

Its a mix between really painful and frustrating. We have these huge platforms now Netflix is popping out specials left and right, YouTube is a large platform, and obviously live stage comedy yet I can only connect with a few because women of colour are so underrepresented. For the most part, mainstream comedy is a bunch of straight white dudes talking about being straight white dudes. Living in a post-colonial era not really I dont want to hear anything else about straight white men for the next 80 years.

Its especially frustrating because there is a huge market out there for diversity. If you think about it from a business point of view, there are more diverse human beings on earth so why are we not catering to them? Why has everything become so male-dominated and white-washed? Cash into the gold mine that IS diversity.

Why did you create SHADE?

I wanted my own space where I could be my absolute self. I wanted to create a space for all marginalized groups. Ive lost count of the number of times Ive been in a room where every comic, one after another, was a man. On top of that, maybe two of which were racialized men.

One joke after another was either misogynistic, racist or homophobic. The discussion isnt about which gender is funnier I believe thats down to the person but rather representation. If there is no representation, the same stories are told, the same narratives, the same jokes. Its important that comedy evolves and includes more than one story.

Was there a particular moment that led you to start the event?

I did a set at some really crappy show and I was the only woman. At first, I was honoured to be asked to be on a show in the first place, but then I checked myself and wondered why I was the only woman, let alone one of three racialized acts on a bill of 10-15 comics. I was also so tired of listening to jokes I couldnt have control over. So I figured, if I created a room with a set standard, I could avoid hearing garbage.

What is the meaning behind the title?

Throwing shade was invented by Black and Latino drag queens in the 90s. I take zero credit for the actual terminology, but I related to the term a lot because my friends would constantly call me out on throwing shade not that I ever meant to (sometimes). Im just really blunt and oblivious at the same time.

I was also really close to calling the show Colours, then I was like, damn Ana, thats so tacky. I wanted something bold, something that described queerness, being from different paths of life, being different shades.

What do you hope to contribute to the Toronto comedy scene?

I want to share a new wave and create a home for marginalized groups. I hope that this encourages producers to do the same with their own shows.

How does it feel to have created a space that represents and celebrates marginalized comedians?

Overall, humbling and rewarding. The most rewarding aspect is seeing comedians speak their truth that they feel like theyre not able to speak in other spaces around the city, and seeing it resonate with the audience.

How does it feel to have sold out five shows in a row?

Unreal. I never expected it to be this big and every time it sells out, my heart glows. I really thought this was going to be a one-time thing in some basement bar, but its been quite the journey. I feel a huge mix of emotions.

Can you tell me about the university tour you are embarking on in the coming months?

Members of student unions from universities across Ontario have come to see different SHADE shows and have wanted SHADE to be a part of their (dis)orientation, as a means of creating an event for diversity. Dates and universities will be released on the SHADE Facebook page so make sure to follow for more info!

Do you have any advice for new comedians?

Stay in your lane and speak your truth. You dont need to be shocking in a racist, homophobic or sexist way. Being honest to your true self is something an audience member can smell from a mile away. Just be your genuine self. Also, reach out for help. Help is so important. You cant do it on your own. I couldnt make SHADE happen without my squad jumping in to help me when Im in the midst of a pre-show breakdown. Im super grateful to them. So thank you squad.