The bulk of the Toronto Sketch Comedy Festival, which kicked off its latest edition last night, is obviously devoted mostly. 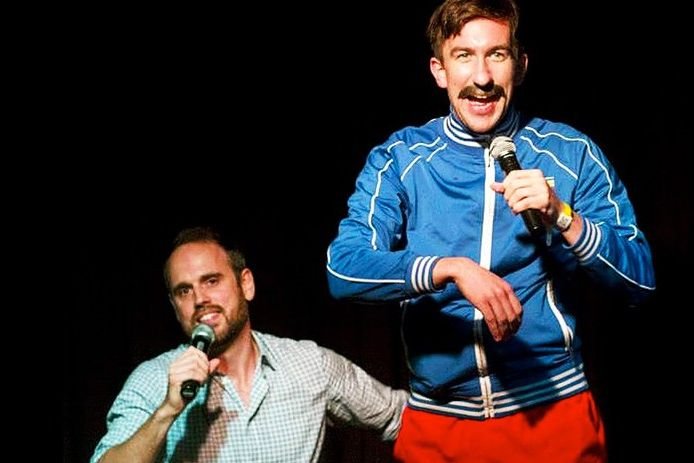 The bulk of the Toronto Sketch Comedy Festival, which kicked off its latest edition last night, is obviously devoted mostly to sketch. But there’s also stand-up and improv. And I don’t even know what you’d call one of the shows I saw last night, the live taping of the podcast My Gorgeous Son (rating: NNNN).

Created by and starring Mark Little and Andrew Bush, formerly of Picnicface and currently of Cavendish, the podcast has a weird and very funny premise. Little plays Andrew’s dad Rollie, who invites guests onto the show to give advice to his handsome son, whom he thinks needs a career boost. The backstory is that Andrew went to L.A. to try to “make it,” and is now back in Canada living in his dad’s home’s boiler room.

The result is a silly and scathing satire of both overbearing parents and (especially) the Canadian entertainment industry. Dominated by Little’s obnoxious, braying, mustachioed Rollie, but with welcome additions by straight men Bush and Everardo Ramirez (who plays the show’s intern), there were well-aimed shots at This Hour Has 22 Minutes, the latest Anne Of Green Gables TV series (for which Andrew recounted a terrible audition), Martin Short’s fictional Jiminy Glick and the classic Canadian TV consumer show for teens, Street Cents. Little/Rollie’s angry skewering of “UCB style improv” got one of the biggest, and most knowing, laughs of the night.

The first guest was Dr. Fraser Crane played, not by Kelsey Grammer but by current Second City mainstage performer Brandon Hackett, who captured Grammer’s voice and highbrow references by taking the “Yes, and…” philosophy of improv literally. (Hackett performs with his troupe Hackett & Langdon on March 16.) D.J. Mausner, who appears at Sketch Fest tonight and next week, also guested as a bullying Incel who had written some un-woke and extremely funny scripts to perform with Andrew.

I have no idea if Bush’s dad is named Rollie, or if he has a penchant for electric blue satin jackets and skimpy red shorts, but that’s how Little played him for the live taping, crouching (“like Gollum,” as someone pointed out) on a couch when he was particularly restless.

I’m subscribing to the podcast now and so should you.

The former is a group of multi-talented Filipino women (including Prairie Nurse‘s Isabel Kanaan and Belinda Corpuz) who satirize everything from gossiping in church to the superstition around singing My Way at karaoke nights. The premises are refreshing, and the musical sequences strong, but many of the sketches lack satisfying endings. They perform again on March 14.

More polished are The Bloody Marys, who present an amusing show devoted to TV binge-watching. Dressed in matching sweat suits, Leigh Cameron and Kirsten Rasmussen play two zombie-like bingers who, with Russian Doll’s catchy song Gotta Get Up as a soundtrack, keep hitting play on their TVs. The shows they then parody include Downton Abbey, Grey’s Anatomy and Black Mirror.

The funniest is a mashup of Anne With An E and The Walking Dead the sweetest is an impeccably staged send-up of romantic comedies, complete with meet-cute, slapstick and happy ending. A nice twist is that the gender and orientation of the characters is refreshingly mixed.

These two Second City veterans also know how to end a show, with a deliriously demented take on a song from The Sound Of Music that is now one of my favourite things. They perform again on March 16.