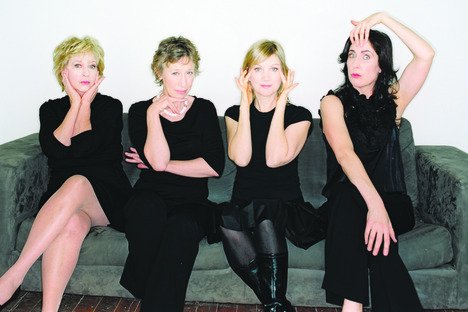 I’ve conducted hundreds of interviews, but I’ve never done one in a minivan before.

That was the idea of Women Fully Clothed, the funniest all-female sketch troupe in the country.[rssbreak]

“We did an interview the other day at the King Eddie, and we thought, ‘That’s not really what our lives are about,'” says member Teresa Pavlinek.

“We’re in this van a lot,” says Kathryn Greenwood. “Usually, we drive around and visit antique shops or cheese places. Today it’s the urban version.”

Which means Tim Hortons drive-thru and a visit to Cherry Beach, where the troupe’s manager, Hendrik Riik, at one point almost enters a road marked “No visitors allowed.”

Are they trying to kill me Sopranos-style? Why? I’ve always been a fan. And, hey, I’ve got a recorder as evidence.

“And the first thing you write is, ‘Teresa’s really pretty,'” says Pavlinek.

Got the picture? Comedy chaos.

Actually, doing the interview on four wheels is pretty savvy. The comedy quartet knows that in this business there’s nothing like having an original hook. Kind of like their act. How many regularly performing comedy troupes can you mention where all the members are a) female and b) over 35?

“There’s this impression that you have to be young to do comedy,” says Duke. “But I think you can find humour in life at any age.”

When I first saw them perform back in 2004 (with fifth member Deb McGrath, who’s left because of TV commitments), I wrote that they could sell out theatres across the country. In the intervening years they’ve done just that, visiting some cities several times and discovering a market hungry to hear their stories.

“We find women love our show because it’s like hanging out with a bunch of girlfriends,” says Jayne Eastwood. “There’s nothing like discovering, ‘Oh, that happened to you, too? You feel that way?’ They’re literally in hysterics.”

This is the local debut of their second show, which they’ve been developing on and off for over a year. Sketches include a bit on cross-border shopping and the fallout from a Ponzi scheme. There are five stand-alone songs.

All four WFC members are Second City alumni, and their combined credits include SNL, SCTV, King Of Kensington, Wind At My Back and The Jane Show.

They’ve won over crowds at the Edinburgh Festival and recently impressed the sold-out gala audience at Chicago Second City’s 50th anniversary celebrations, where Joe Flaherty told them they should take the show to Broadway. They’re considering it obviously, there’s an untapped market out there.

Which gets them talking about the current dearth of good roles for women.

“I’ve always wondered why there’s no female version of Anchorman,” says Pavlinek. “I hope it’s not because people don’t want to see women being goofy funny but only want to see them being hot funny. Even Tina Fey in Date Night looks pretty hot.”

Well, the subtitle of WFC’s new show is “older and hotter,” right?

Pavlinek, Duke and Greenwood on men in audience, and how the material appeals to anyone, anywhere:

Greenwood on being an actor and being a mother:

Eastwood, Greenwood and Pavlinek on the importance of Second City to their careers: