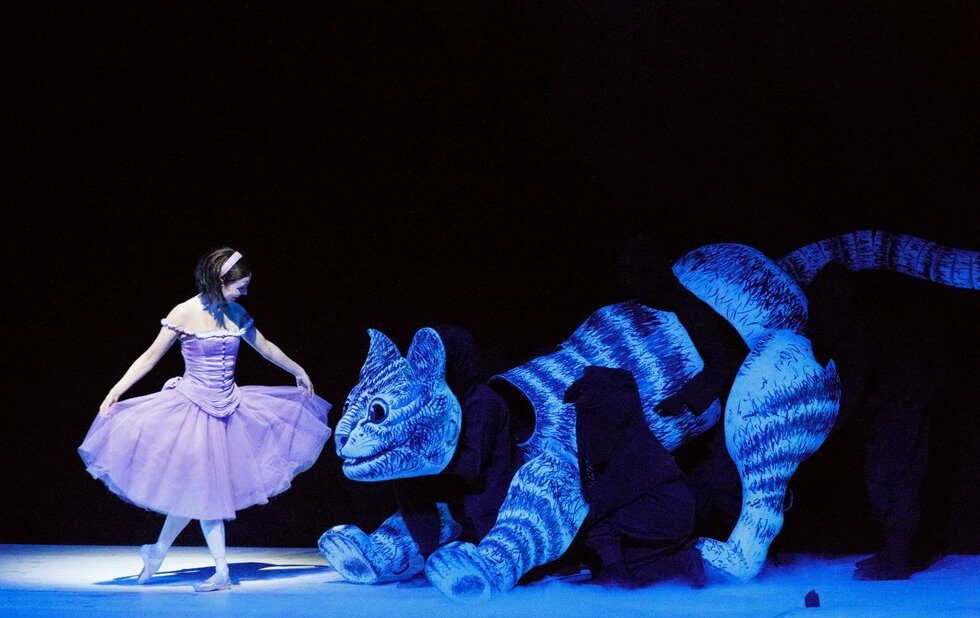 Off with his head! British choreographer Christopher Wheeldon and his creative team have made a very good-looking ballet that fails to deliver where it counts most in the dance.

First unveiled in 2011, this co-production with Britains Royal Ballet re-imagines Lewis Carrolls famous story about Alice and her psychotropic adventures down the rabbit hole. Set and costume designer Bob Crowley and lighting designer Natasha Katz have had a riot coordinating an eye-popping graphic style using fresh bright colours, projections and animation. The team plays with scale, using oversized props and backdrops to frame Alices journey and the creatures she encounters along the way.

One of these, the Cheshire Cat, is a true marvel. Constructed of disparate pieces manipulated by black-clad operators, the giant-size Cat materializes and then melts mid-air. Others hedgehogs, frogs are merely cute, or unsurprising. The flamingos, for example, stand on one leg a lot and mostly use puppet heads to achieve flamingo-ness. Their bit seems to go on and on, as does the second act group flower waltz (though there is some initial excitement when they make a brief appearance in the house aisles in the first act as petals cascade on the audiences head).

Mind you, its not all fluff and light at this psychological tea party. An early scene takes place in a bloody sausage-making kitchen and a cleaver-wielding Cook (an energetic Jenna Savella at the performance I saw) makes regular appearances throughout the ballet. As does an Executioner and a regiment of head-hanging condemned.

But it is never established just why Alices dreams are so bleak. What did the girl do to deserve such an uneasy sleep? Was there something in her tea? And why didnt Wheeldon up the ante with more interesting choreography to go with all those special effects? The creator of The Winters Tale and the Tony Award-winning An American In Paris is certainly capable of better.

Most of Wheeldons moves are run-of-the-mill. Innovative touches the Mad Hatter character, for instance, is a tapper (Donald Thom alternates the role with the first female Mad Hatter Chelsy Meiss, among others) fail to make up for the limited palette that even main characters are given to work with.

Instead, Wheeldon has entertained himself by including Easter-egg-like nods to great works from the classical canon, most irreverently the Rose Adagio from Sleeping Beauty parodied by the slash-happy Red Queen and a handful of condemned courtiers. There is also a quick homage to Balanchines Apollo (part of the NBoCs current season) in the form of a multi-person fantail arabesque.

Happily, we also get Rex Harrington independently hamming it up in heels and wig as the King of Hearts, and Brendan Saye as a tall and compelling White Rabbit. In fact, there are quite a few nuggets of dancing genius in NBoCs Alice (including a rock-steady Jillian Vanstone in the title role), scattered like treats at a bland buffet.

Yet ballet fans are unlikely to fully fall down this rabbit hole the magic just doesnt go deep enough.