Minorities is a razor-smart performance work 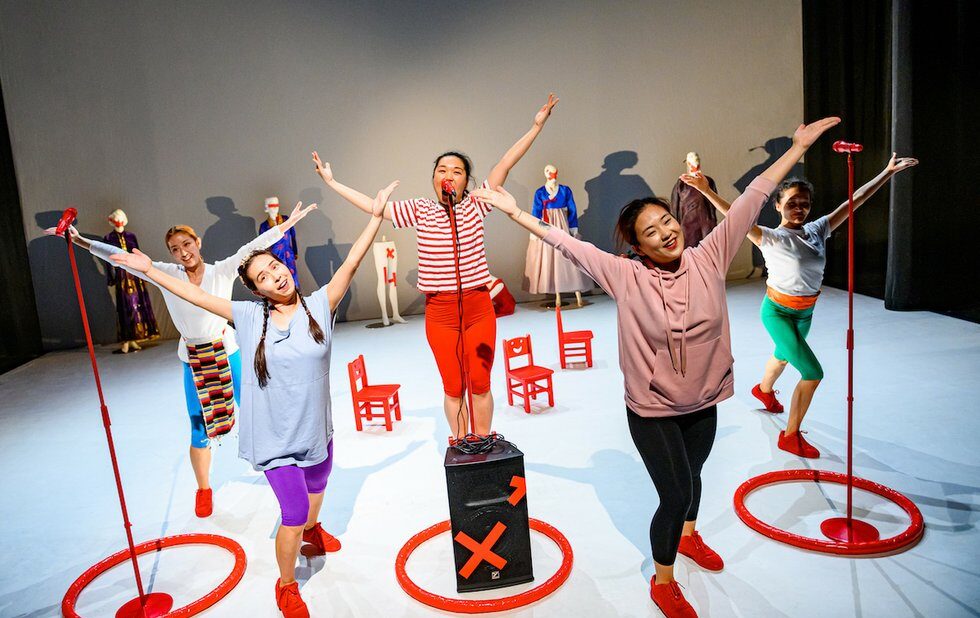 Kick-started by five young women who leap from the audience and headbang to the German rage-rock group Rammstein, Minorities mixes over-the-top tropes of Chinese patriotism with gently provoking humour and a riotous blend of traditional dance, pedestrian movement and gestures. Yes, there’s a lot going on at all times in this razor-smart performance work.

Making his North American debut, 28-year-old Beijing-born Yang Zhen is a rising star on the international theatre scene. Clocking in at about an hour, Minorities is part three of his Revolution Game Trilogy (part one was created while he was still a student at Minzu University). Its nominal subject is identity within ethnic Chinese minorities, as represented by the five performers on stage who were raised in the regional cultures of Macau, Mongolia, Tibet, Korean Chinese and Uyghur. All of the performers are playful and proud, offering distinct artistic expressions, but some are feistier than others – notably Lou Hio Mei who connects most directly with the audience in the spoken parts of the show. At one point she arranges her shirt to display red taped Xs on her breasts the others take turns physically fighting her to cover them.

Cultural awareness in a complicated socio-political environment is one thing, but it’s the eye-poppingly memorable aesthetics of Yang’s work that so effectively frame his ideas, both overt and unspoken but implied.

To bookend the show, digital artist Zhang Yongji has created a colourful animated video featuring various heads and faces, including Chairman Mao’s. The heads lip sync the opening Rammstein number and come back at the end for a dizzying on-screen dance. At other times, the words to Chinese songs (“56 constellations, 56 languages, brothers and sisters, love China!”) form static onscreen surtitles.

Film projections are skillfully used throughout the work. In one section, the cast leads the audience in a sequence of phonetically pronounced English words and arm gestures that are then revealed in documentary footage to be part of a mass English learning tutorial for Chinese citizens who wish to teach in Taiwan. There are also startling recordings of very young children performing for each other in a classroom setting.

The grainy images contrast Minorities’ many moments of live spectacle, which begin to resemble the kind of government-sponsored revue show that uses patriotic fervour, emphatic delivery and big bright smiles to demolish any urge to question – especially with the appearance of glammed-up traditional opera singer Huang Ping late in the show.

Bouncing from understated critique to exuberant excess, Minorities is a clever and spirited reflection of next-generation China. But its questions and concerns certainly resonate here and elsewhere in the world.