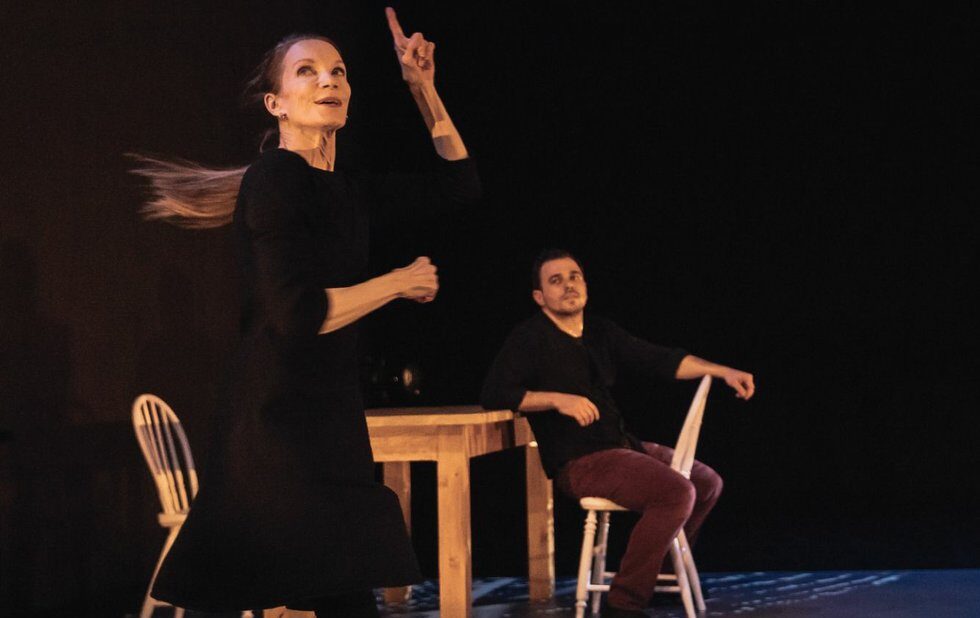 Aint love grand? That it can also be tedious, banal, contentious and heartbreaking is amply demonstrated in Four Old Legs, James Kudelkas new duet for Evelyn Hart and Zhenya Cerneacov.

The work is a series of deceptively simple vignettes about long-term bonds, performed around a sturdy table and chairs. Projections by Jeremy Mimnagh form an ever-changing visual carpet underfoot. As the piece opens, Cerneacov sits at the table, glum, with a hand-to-face gesture that suggests drinking Hart soon follows with a solo of her own.

They are strong, though very different, performers. Hart retains a wispily elegant classical deportment (though she is unexpectedly game in the rough-and-tumble sections) Cerneacov is beefier, more grounded and sensual, visibly powerful. While fully capable of holding the stage on their own (I was especially entranced by Cerneacovs extended dance to Serge Gainsbourgs Requiem Pour Un Con), its when they dance together that the magic really kicks in.

Kudelkas use of flow, a kind of waltzy push and pull, seems tailor-made for this superficially incongruous pair. They use eye contact, and grasp hands, wrists and forearms to maintain connection and interpret the symbiotic instincts that govern long-shared physical space. Cerneacov often transports Hart through space, skimming the floor in low lifts. Harts task seems more delicate as she probes, restrains or preens in what feels like a very personal vocabulary. As it should, the partnership makes the piece.

The action is largely driven by an eclectic playlist of 16 songs, most of them popular, with one Chopin prelude. Too often for my comfort the choreography literally interprets specific song lyrics in a way that recalls the commercial style of broadcast dance shows. But performance quality and the more organic details of the movement, many of which read complex, even dark at times, are a special joy to observe up close in the tiny Citadel space.

One of Canadas most respected senior choreographers, Kudelka has the eye and maturity to sketch the long-term relationship experience in subtle, yet very legible shades. Still, the final section is a bit of an enigma. To the familiar strains of Peggy Lee singing Is That All There Is?, Cerneacov carries Hart perched high on his shoulder in a slow procession. The pose accentuates Harts pristine balletic lines and ease aloft as she spreads her arms triumphantly up and out.

Love may conquer all, Kudelka seems to suggest, or it may just be putting on a brave face.