NOW MagazineCultureComedyFinding the comedy in kids going back to school

Finding the comedy in kids going back to school

In her latest video, Second City Toronto's Natalie Metcalfe gets us laughing over parental worries 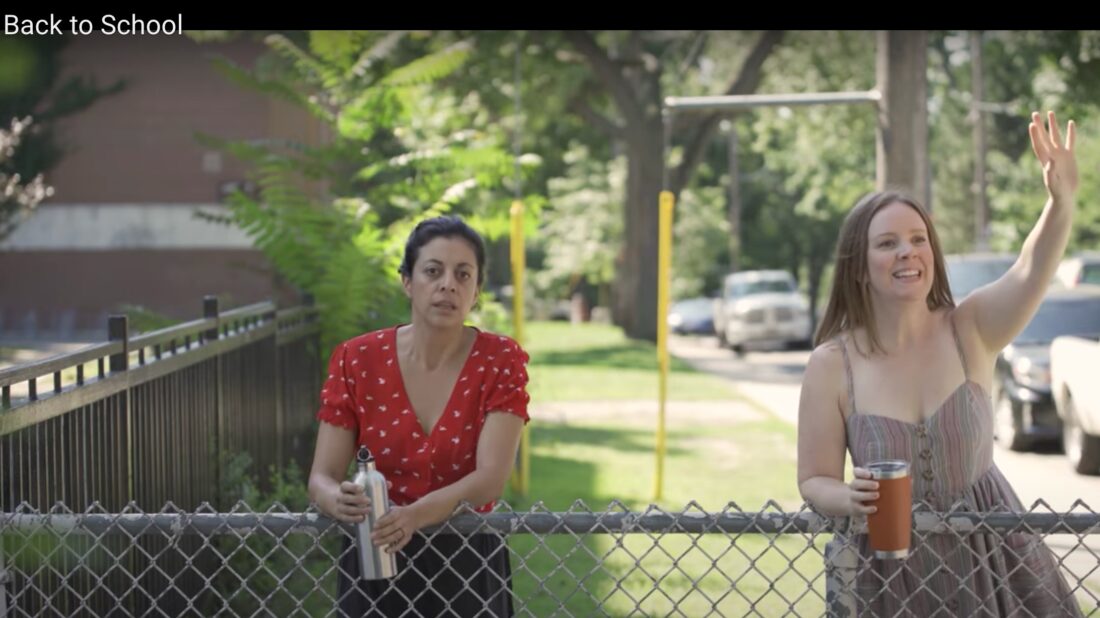 Paloma Nuñez (left) and Natalie Metcalfe play moms worried about sending their kids back to school.

Last month, Second City Toronto cast member Natalie Metcalfe made us laugh about how hard it is to find a place to pee during the pandemic in the YouTube video Where To Pee. This month, she’s finding the humour in another important issue: parental anxiety over sending their kids back to school this fall.

In the four-minute YouTube video Back To School, she and Second City alumnus Paloma Nuñez play anxious moms who check in on their kids during recess. Speaking at a school fence, they yell at their children, making sure they’re wearing their masks and staying six feet apart from their classmates.

“How do we know that the school is following health protocols?” asks Nuñez’s character, quite reasonably. “I brought a thermometer! I will check everybody’s temperature… if I need to.” Later she tells her daughter to make sure a friend’s fingers are out of her mouth. “I don’t care if her hand sanitizer tastes like bubble gum!”

Metcalfe and co-director Danny Nash deal with a lot in a few minutes: home-schooling, teacher safety, parental exhaustion and how “we’re all just doing what we can to survive.” That line, by the way, is followed by a great visual gag.

The appearance of a third worried person adds to the humour and provides a graceful way for the comics to end the sketch.

Kudos to Metcalfe and the creators for dealing with an urgent, difficult issue in a way that raises everyone’s concerns and also gets us to laugh about them.

Technically, the video looks great, although make sure you keep the volume on high – a few lines are muffled. (Try using the closed captioning function to get every word, including the kids’ ridiculous names.) One good thing about the audio? Even though we don’t see a single kid playing, the clever sound mix makes them seem like they’re right there.

Watching Nuñez has been one of the pleasures of comedy-going in this city for years. But Metcalfe is emerging as one of the most versatile comic actors around. The way she uses her voice to express her inner anxiety is just masterful.

Obviously, as Metcalfe has been demonstrating, there’s a lot on our minds – and many ways to make us laugh about it. First-rate comedy is definitely an essential service.