Report from inside the reopened Niagara Falls casinos

After 16 months, Niagara Falls' two massive casinos reopened at 50 per cent capacity this week, but it's not the same 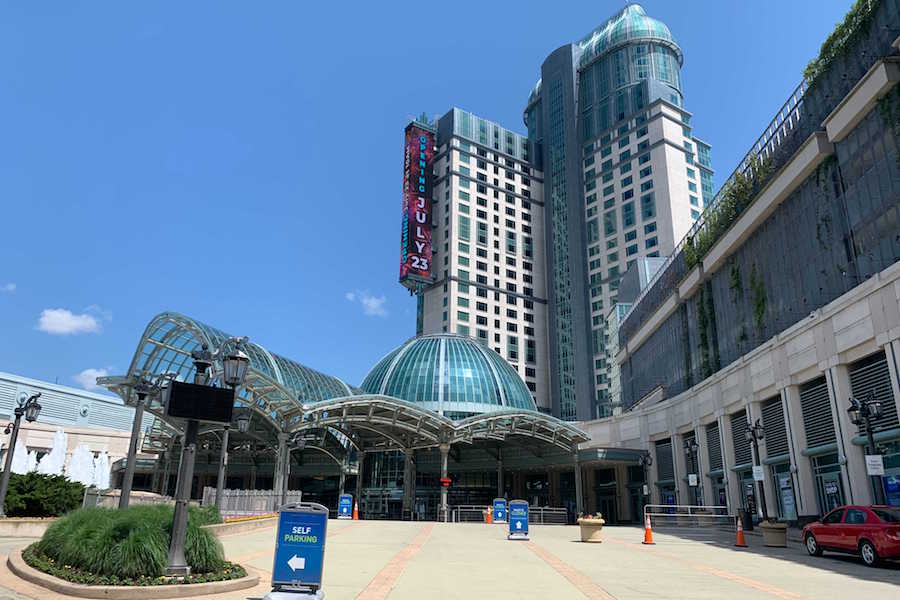 Fallsview Casino in Niagara Falls, which has remained empty for 16 months, is now ready to take your bets.

Gamblers wanting to try their luck at two of Canada’s largest casinos have had to wait 16 months for them to reopen during the pandemic. Fallsview Casino and the neighbouring Casino Niagara, both located in Niagara Falls, officially reopened this morning at 10 am. But at an exclusive sneak peek for VIP members two days ago, which I attended, we had to wait a few more hours in line.

Back in October, I reported on the reopening of 11 Ontario casinos, with a very limited capacity of 50 patrons each. That was obviously unfeasible for the two massive Niagara Falls casinos, so they remained closed. Fallsview Casino has a capacity of approximately 10,000.

But under the province’s step 3 reopening plan, casinos can open up at 50 per cent capacity. Hence the reopenings both here, in Windsor (Caesars Windsor opened today as well) and Casino Rama in Orillia, which is set to reopen July 29.

Unfortunately, despite having had more than a year to prepare for this week, Fallsview Casino bungled its opening. My invitation, with the subject heading “An Exclusive Invite to our VIP Re-Opening,” read: “On Wednesday, July 21 at 10 am we’ll be open just for you! You and a guest will have exclusive access to both Fallsview Casino Resort and Casino Niagara two days before our official re-opening.”

Doesn’t that sound amazing? Surely, the casino would have a glass of champagne waiting for me, and perhaps a “Welcome back!” kit that included a cloth mask with the Fallsview Casino logo stitched onto it.

My dad and I arrived at 2:30 pm, and saw a line of about 25 to 30 people in the reconfigured entryway to the casino. We started to go toward it and then were stopped by a security guard. Turns out there was a much, much longer line we had to join that took us to the far end of the adjoining galleria mall.

After chatting with a few masked patrons in line, we discovered there was another scheduled “VIP opening” for 3 pm. One of many employees wearing bright orange sweatshirts emblazoned with the word Momentum – the name of new owner Mohegan Sun’s player’s card program – told us that the line was for contact tracing.

So we waited, inching forward slowly. 30 minutes. One hour. The line behind us grew so long it had to loop and double back. It felt like being in the customs line at the airport. Gamblers kept arriving and making the same mistake we had, and groaning when they saw the lineup. Finally, after almost two hours, we made it to the check-in desk, where they took our info, examined our photo IDs and sent us to the security guards. There, we were asked to stand on a red dot – I seem to recall it was shaped like a big poker chip – take off our masks and stare up, presumably into a camera.

That was it. Nobody asked us a single question about how we were feeling, whether we had been out of the country or in contact recently with someone who had tested positive for the COVID-19 virus.

Once inside, things were basically the way they had been in March 2020, with a few big changes.

I stood at one chairless machine, inserted a $50 bill, and because of a decent bonus game, doubled my money in about five minutes. Perhaps this was going to be a lucky day.

Table games are set to reopen at the casino on July 30, but with a couple of changes. Because the casino doesn’t want patrons touching cards or chips, some games will remain closed. Craps and roulette tables will be closed. I did spot a new electronic craps game, however, in which players separated by plexiglass make bets on monitors before them and the shooter tosses a real pair of dice.

Good luck finding a cash redemption machine – a terminal that takes electronic tickets from slot machines and dispenses cash. Most of them are turned off. And when you do find one, keep in mind that they only give out paper money, loonies and toonies. If you have change under a dollar, the machine dispenses a ticket with that amount on it, to deposit into another slot machine.

The casino has upgraded its air filtration system. And one good thing about Fallsview is that the ceilings are massive. I never felt crowded. Most everyone I saw was wearing a mask.

Food and drink options are slim. I spotted one cocktail server taking orders, but even though I was thirsty, I realized I had no change on me for a tip – thanks to those changeless machines. If I come back, I’ll remember to bring some loonies.

The casino’s famous Fallsview buffet is open, but it’s only serving food from its smaller Deli à la carte menu. Around dinner time, I asked someone in line how long they had been there, and they said a half hour. They still had at least 15 minutes to go before being served. No thanks. I’ve been in enough lines today.

The situation at Casino Niagara, about one-and-a-half kilometres away, was similar, except fewer slot machines were open. The downstairs area was so empty it felt ghostly. The usually lively poker room was closed. Only one bar was operational. Most of my favourite slot machines were turned off. Unlike Fallsview Casino, which is open 24/7, this casino will be open from 10 am until 2 am.

But both here and at Fallsview, the employees I saw looked happy to be back at work.

When I check in with my dad, he’s also happy, because he won a small jackpot of $800, and now he’s up money. I’m down a few hundred dollars. I do the arithmetic and average the loss over all the days the casino was closed. That amounts to 60 cents per day. It could be worse.

2 responses to “Report from inside the reopened Niagara Falls casinos”