Since its star-studded launch last fall, XOs Hxouse immediately made a rep as Torontos coolest creative incubator. The ventures newest. 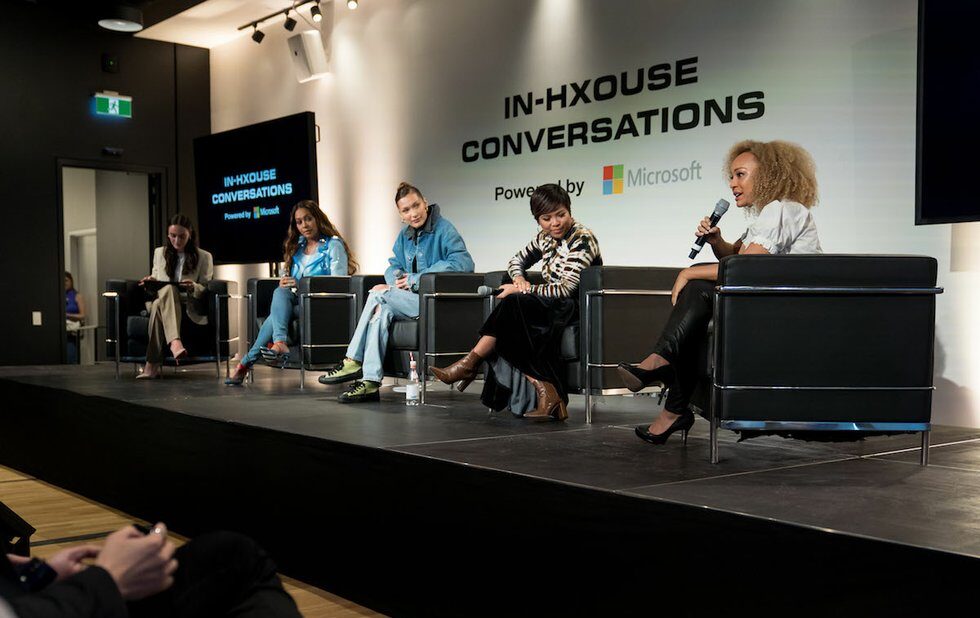 The ventures newest endeavour, a free panel series called In-Hxouse Conversations, is capitalizing on this cool by gathering exciting young voices behind impressive platforms in its lakefront space at Artscape Daniels Launchpad.

After kicking off on March 29 with a talk from Acronym founder and streetwear phenom Errolson Hugh, the series continued on April 1 with a four-person panel on the ins and outs of creative entrepreneurship.

The room was packed with familiar faces both on and off Instagram from Torontos young creative scene, from DJs and designers to producers and models.

The conversation was led by influencer and entrepreneur Olivia Perez, also one of Hadids longtime BFFs.

Panelists stayed tucked away backstage as the scheduled start time came and went, and the casual vibe shifted to anticipation and then restlessness. Before the panelists appeared, XO photographer Joachim Johnson explained that the creatives behind Hxouse, including La Mar Taylor and Ahmed Ismail, didnt set out to put together an all-women panel.

The thing we kept landing on were these powerful names they just so happened to be female, he said. We didnt want to make this a thing about making a female panel. These were the voices that kept ringing loudest to us.

The all-women panel offered insights into their come-up stories without being self-congratulatory. It was clear they made it because of their expertise, rather than their gender.

Still, having an all-women entrepreneurship panel immediately after Womens History Month seemed like a statement: that womens stories matter beyond the confines of a celebratory month.

Hadid was the most recognizable face, and although she obviously brought star power, she was refreshingly zen. She shared her parents immigration stories and continuously urged attendees to be vigilant in taking care of their mental health.

But the best advice came when Perez focused the talk on the ups and downs of being a boss. Here are the most interesting takeaways.

If you start your own company, sharing the financial stake can be tough, but giving up equity is a sign of levelling up.

I cried like a baby when I gave up equity, DeBaun recalled. You have to give a lot. And youll get diluted, meaning that as a company grows, more voices tend to have a say. Its part of the process because it is a business transaction, so there is an exchange.

DeBaun also advised attendees to find a creative outlet that is completely separate from their business and to focus on building an identity outside of work.

Blavity is certainly what I love and what I do every day, but its not who I am, she said.

Anthony credits landing her role on Starzs crime drama Power to her relentless persistence, which manifested as incessant calls to costar and executive producer 50 Cent. So many people are like, Oh I didnt want to bother this person. Dont be on no stalker shit now, she jokingly clarified. But be persistent.

50 [Cent] was telling me about Power way before it happened and I remember that when they were going to start auditioning, I called this motherfucker like 500 times, she revealed to laughs from the crowd. Persistence is the key.

There is a special place in hell for entrepreneurs who think… they can only be successful if everyone else around them is pushed down or pushed away, Rubio said. From all of our experience, thats just not the case. Ive had so many people help me along the way and I feel the need to do the same. Rubio explained that she pays it forward by investing in other entrepreneurs.

There is room for everyone, she said.

DeBaun warned attendees not to put all their emphasis on one social media channel.

As a media company, we are reliant on Facebook and we all saw what happened when Instagram and Facebook went down, how that left a lot of people kind of shook. DeBaun added that giving control to a tech giant takes it away from your company.

We need to think about the dependency on social technology and make sure were not allowing other platforms to be the ones who control our relationship with the community were serving, she said.

Before raising over $81 million for Away, Rubio had to get comfortable recruiting investors.

I grew up thinking that I cant ask people for money, she explained. What really helped is that my co-founder reframed the whole thing in my head. She said, Youre not asking anyone for money. Youre giving them the opportunity to invest in something that is going to make them a lot of money.

Obviously now its easy to look back and see that those people are getting really rich, which is awesome, she continued. But it was really hard because I grew up with the mentality that you fund everything yourself.