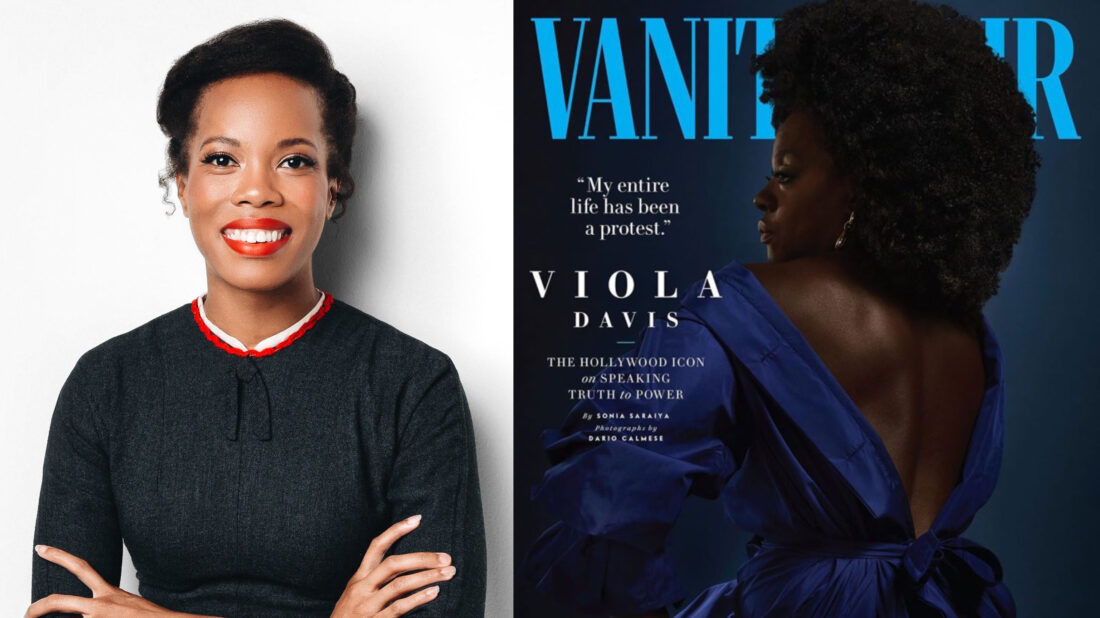 Ryerson prof Kimberly Jenkins has revamped her Fashion and Race Database, which might eventually include Vanity Fair's July/August 2020 cover.

Dario Calmese became the first Black photographer to shoot a Vanity Fair cover this year. His striking image of Viola Davis bearing her back in a voluminous regal dress made history while channeling historical trauma.

Calmese made it no secret that Davis’s pose is meant to recall The Scourged Back, an 1863 photo of Gordon – aka “Whipping Peter” – who escaped slavery, his ravaged body seized upon by abolitionists as a reason to end the cruel practices in the South.

Jenkins formerly taught at Parsons School of Design in New York and is now bringing her course Fashion and Race to Ryerson University this fall. The undergraduate course merges her interests in race, religion, art, sociology, anthropology and fashion.

Jenkins is also re-launching her Fashion and Race Database, which is an extension of the syllabus. The site collects research and resources to further discussions on everything from cultural appropriation to magazine covers that are both empowering or exploitative.

Jenkins is on the fence on when it comes to Vanity Fair’s latest cover.

“It’s supposed to be a poetic and empowering image that hopes to show what Viola Davis has endured in the film and television industry,” says Jenkins, adding she’s excited about the historic opportunity given to an obviously talented Black photographer.

She also has reservations with equating a Black woman’s experience in Hollywood to an enslaved man. The professor is digesting criticism relating to shadeism and colourism, along with a general fatigue of images that evoke slavery and trauma.

Writer Kellee Nicole Terrell tweeted her admiration for the cover, but also contrasted Davis’s treatment to Halle Berry, Thandie Newton and Zendaya. Would any artist use a light-skinned Black woman to channel such violence?

“When we have conversations about power and strength there’s room for critique,” says Jenkins. “Why is it that darker skinned bodies have to bear the burden of these conversations of durability, strength and resilience?

“The debate will surely go on,” says Jenkins. she will keep her eye on how the discourse evolves, and perhaps the critiques will end up on the Fashion and Race Database.

The Fashion and Race Database

Jenkins’ website is all about the fashion industry’s racist history and the messy and complicated ways oppressive forces are still at work, even in so-called progressive initiatives.

A work in progress, the site collects scholarly papers and video lectures laying out racial oppression that has gone on for centuries. Updates include articles on the Indigenous origins and contemporary use of moccasins.

The racial reckoning taking place in many industries following the police killing of George Floyd (clearly an inspiration for the Vanity Fair cover) has Jenkins side-eying recent fashion-world developments. Many magazines, brands and influencers now say they stand against anti-Black racism.

Nike recently released an anti-racism campaign called For Once, Don’t Do It. The ad flipped the slogan “Just Do It” into a plea to stop denying racism exists. In a show of solidarity, competitor Adidas shared the ad.

Jenkins acknowledges that it’s incongruent to take social lessons from a corporation that won’t pay garment employees a living wage. But Nike’s activism, in contrast to the wider fashion industry, is fascinating. Dollar signs motivated the decision, but Nike is on the right side of history in backing NFL player Colin Kaepernick.

The league blacklisted Kaepernick for taking a knee during the U.S. national anthem to protest police brutality. Nike angered many outspoken white people in the process. But despite what Donald Trump says, the move didn’t hurt the NFL’s bottom line.

As a brand ambassador, Kaepernick is also a far cry from Michael Jordan.

“Republicans buy sneakers, too,” Jordan said in a supposedly tossed off joke that would define his stance – or lack thereof.

Asked about that moment, Jenkins stresses the weight those sneakers carry – in fashion, politics andpeople’s lives.

She refers to a 1990 Sports Illustrated cover story by Rick Telander titled Your Sneakers Or Your Life. Telander, and other journalists at the time, reported on Black men dying at the hands of other Black men over Nike Air Jordans shoes and other coveted apparel.

“The shoe companies have played a direct role in this,” Telander wrote. “With their million-dollar advertising campaigns, superstar spokesmen and over-designed, high-priced products aimed at impressionable young people, they are creating status from thin air to feed those who are starving for self-esteem.”

Jenkins, who plans to add that cover story to the Fashion and Race Database, is drawn to the paradox of that moment.

“Everyone wanted to be like Mike,” says Jenkins, who describes Jordan as a titan of basketball who was influencing the whole world while reaching unimaginable heights. “And people thought, ‘Well surely you could reach back as you’re climbing. Look out for us. Put in your support behind a politician. Help us.’”

Jordan never took a stand or a knee or said anything to offend potential white customers. Instead, he raked in millions for those sneakers and chose to be an icon of success. Air Jordans were a sign of Black progress; a coveted fashion brand with a Black man’s name on them.

And in 1990, those sneakers made it on the cover of a magazine because someone made the connection between them and violence done to Black bodies.

For more from NOW’s interviews with Kimberly Jenkins, listen to the NOW What podcast and watch the video below.