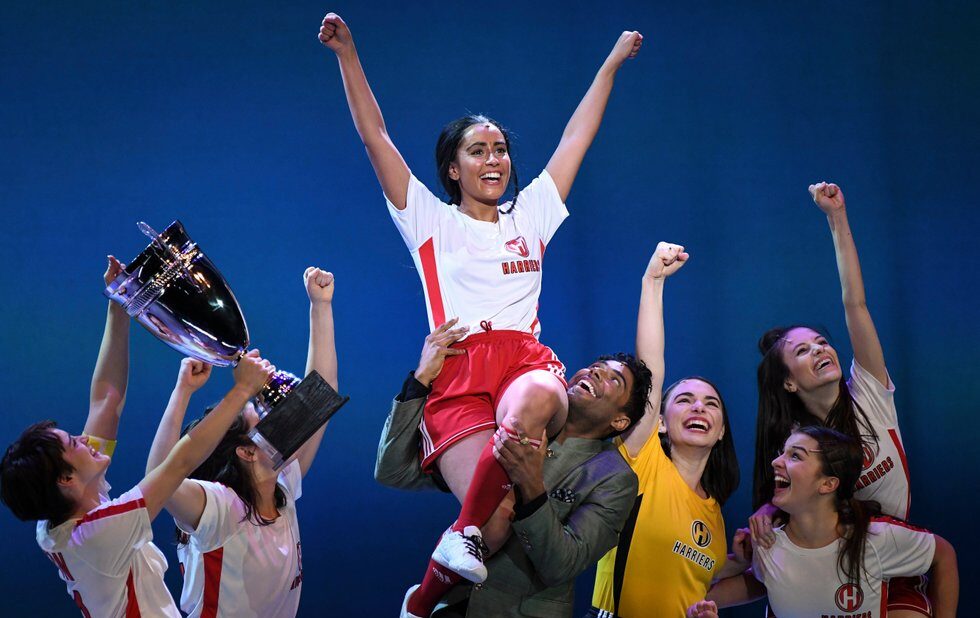 The plot concerns 18-year-old Jesminder “Jess” Bhamra (Laila Zaidi), daughter of Sikh immigrants in London, who loves soccer and idolizes David Beckham but is forbidden to play the game by her conservative parents. Juliet “Jules” Paxton (Catarina Ciccone), a white English girl, notices Jess practising on her own and invites her to join her all-girls team, the Hounslow Harriers. Coach Joe (Ashley Emerson) immediately recognizes Jess’s exceptional ability, and Jess joins the team without telling her parents. When her parents inevitably find out, they double down on barring her from ever playing the sport.

In an effort to make Bend It a feel-good musical, the creators contrive a plot in which obstacles to people’s ambitions are far too easily overcome. Act one ends with Jess in agony that she can’t join her team in an international competition yet act two begins with her playing in that very competition. Eventually, we’re given a barely credible explanation for how this happened. The wedding of Jess’s sister Pinky (Blythe Jandoo) is called off in the first act, but is back on in the second, once the future in-laws have had a simple chat with each other.

Except for a few numbers like Glorious and Bend It, Howard Goodall’s music mostly sounds like unremarkable 1970s adult contemporary filler. It becomes more attractive when Goodall allows in Indian rhythms and melodies. When it morphs into full-out bhangra, as at Pinky’s wedding, the show is at its most alive both musically and in Gino Berti and Daniel Ezralow’s choreography.

All of the performers give solid, committed performances, though director Madeline Paul does not encourage the actors to fill out their sketched-in roles. Nevertheless, some actors do succeed in bringing out their characters’ complexities, notably Zaidi, Ciccone, Emerson and Matt Nethersole as Jess’s closeted gay friend Tony.

The show’s racial politics are unclear. Near the start of act one, Jess’s family sings Look At Us Now, celebrating the great success they have had since immigrating to the UK. Yet, later Jess’s father (Sorab Wadia) sings People Like Us, about how white men’s rules always hold back Indians and other minorities. At the end he reprises the song with new words to say how he has held himself back more than outside prejudice has. So which is it?