NOW MagazineCultureMusicalsGurinder Chadha on why Bend It Like Beckham still matters

Gurinder Chadha on why Bend It Like Beckham still matters 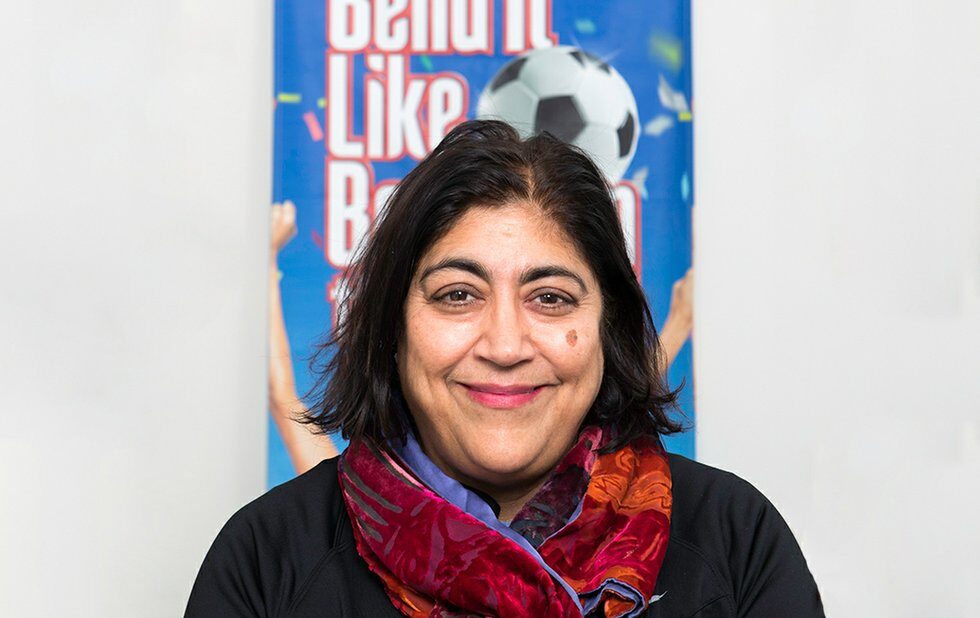 So much has changed since Bend It Like Beckham played in movie theatres 17 years ago.

Back then, there was no YouTube or Lilly Singh, who was just entering high school. M.I.A., Aziz Ansari, Kumail Nanjiani and Mindy Kaling were years away from the limelight. South Asian representation in pop culture was limited to Apu on The Simpsons, a character voiced by a white guy. Justin Trudeau thought Blackface and Brownface were chill things to do.

And so, this 2002 movie about a British-Indian girl who dreamed of playing football (as in soccer) despite her parents’ objections was in a league of its own.

“We are a lot more mainstream than we were,” says director Gurinder Chadha, who will be discussing Bend It Like Beckham  at TIFF Bell Lightbox on December 9. “The film has been part of that change.”

Chadha, a British-Indian filmmaker, was recently in Toronto overseeing rehearsals for Bend It Like Beckham: The Musical, which has its North American premiere at Meridian Hall in December four years after debuting in London’s West End. Chadha’s girl-powered coming-of-age story about diaspora identity got the Billy Elliot treatment: a film-to-stage adaptation that Chadha feels, in some ways, improves on the original.

In this story of a character caught between two cultures, football training becomes a rhythmic spectacle alongside Bollywood-flavoured dance sequences. And supporting characters can thoroughly explore their emotional hang-ups because experiences previously boiled down to a line of movie dialogue are fleshed out onstage into entire songs.

The movie starred Parminder Nagra as Jess (short for Jesminder), a would-be soccer player who idolizes David Beckham, cozies up to her thirst-trap coach (Jonathan Rhys Meyers) and alternately loves and competes with Juliette, a teammate played by Keira Knightley. Knightley went on to become a major star after her supporting role, appearing in Pirates Of The Caribbean and Love Actually. Her trajectory was another example of how white actors are more likely to break out in Hollywood than other demographics, as if to prove a point a character makes in Bend It Like Beckham.

“We’re not meant to dream,” says the director, describing a sentiment Jess’s father (Anupam Kher) expresses in the movie. His character’s experience with racism motivates him to shield his daughter from her football dreams to keep disappointment at bay. “We’re not meant to aim high.”

With Bend It Like Beckham, Chadha set out to prove otherwise, and that’s what made it a game-changer.

Diaspora movies in which first-generation South Asian immigrants try to figure out their place in the West were relatively new at the time. Chadha cites Canadian filmmaker Srinivas Krishna as the guy who started it all in 1991 with Masala, followed by Krutin Patel’s ABCD (1999) and Deepa Mehta’s Bollywood/Hollywood (2002). ABCD is particularly grating because it paints younger South Asians in the West as a lost generation, and their efforts to assimilate are regarded as both self-hating and out of touch with their roots. The title is an acronym for American-Born Confused Desi. Bend It like Beckham blew that shit up.

Chadha’s first film was the autobiographical 1990 documentary short I’m British But…, in which she wore a lehenga accessorized with a leather jacket and Doc Martens and walked a British Bulldog on a leash.

“It was a very confident assertion of what my identity is, as hybrid and multiple,” she says of that film, adding that she wanted to push back against the tropes that were peddled to us before we could control our own stories.

“With Bend It Like Beckham, I was trying to challenge those stereotypical notions that we’re confused or that we’re part of a culture clash or that we have an identity crisis,” she says. “What I wanted to show in Bend It Like Beckham was the beautiful negotiation that goes on with us to be true to our parents but also true to ourselves. It’s not a dichotomy. It’s not we can have this, but not have that. We can have it all but we just negotiate it cleverly with our parents.”

Bend It Like Beckham anticipated narratives common in Lilly Singh’s skits and Kumail Nanjiani’s 2017 film The Big Sick, which was released into a culture that had been discussing diversity more appreciatively and specifically thanks to the viral hashtag #OscarsSoWhite. Chadha noticed a difference when comparing the critical reactions to Bend It Like Beckham and her latest coming-of-age diaspora tale, Blinded By The Light.

“People are writing about culture, politics and race in a totally different way,” says Chadha. She says Bend It Like Beckham: The Musical gives a second life to the story by tapping into the zeitgeist in ways the movie was unable to the first time around.

“The musical is a celebration telling the story of who we are – for us and a mainstream audience,” she says. “It’s making everybody in that auditorium live their life as an 18-year-old Indian girl grappling with dreams and duty. It’s emotionally charged in a way that the film isn’t.”