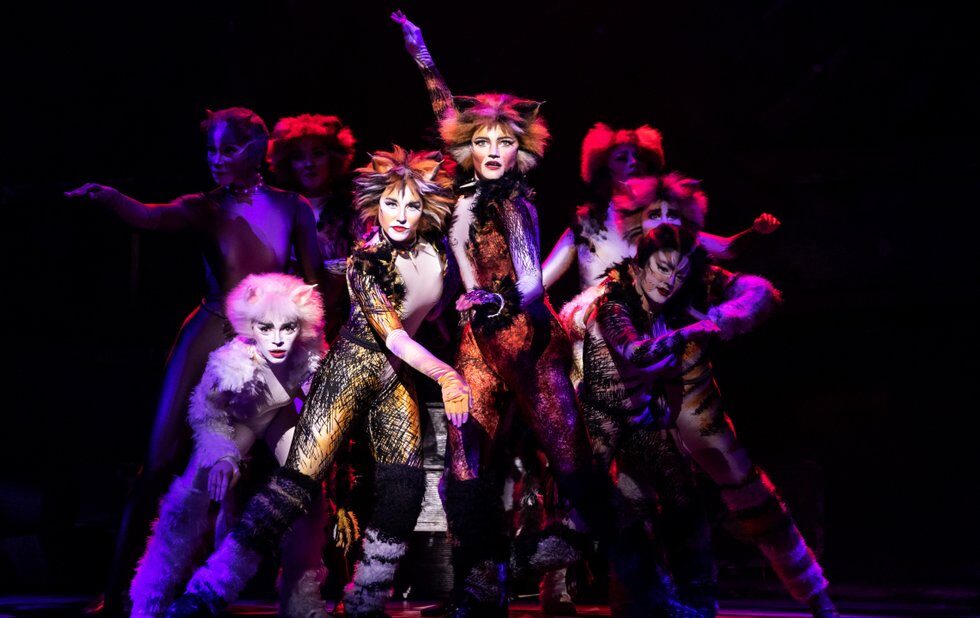 Cats is a show that brings out some people’s claws, but makes others purr with delight. For me, it was the first original cast recording I purchased, dropping big babysitting bucks on the UK import, and then learning every song. My obsession ended when I discovered meatier musicals, so I felt tentative revisiting the current Mirvish touring production. Happily, those fantastical felines still mesmerize and enchant.

For the uninitiated, composer Andrew Lloyd Webber set T. S. Eliot’s Old Possum’s Book Of Practical Cats to music (with help from Trevor Nunn, who contributed additional lyrics and directed), and in May 1981 the new musical opened in London’s West End, running 21 years, spawning a Broadway production and touring worldwide.

The play introduces the Jellicle cats, with their tongue-twisting monikers and momentous personalities. Their leader is Old Deuteronomy (regally embodied by the sonorous Brandon Michael Nase) who by the play’s end selects one cat to ascend to a heavenly metamorphosis. Despite its heavy core theme, Cats includes a long lineup of catchy tunes in which nimble actors harmonize, belt, recite and dance a variety of styles (yes, it includes tap-dancing cats).

All fans have favourites. Rum Tum Tugger (McGee Maddox, formerly of the National Ballet of Canada) with his growly voice and Elvis gyrations pleases the crowd, and so does Mr. Mistoffelees (PJ DiGaetano). Watching both performers dance leaves you mesmerized. Bustopher Jones and Gus The Theatre Cat are played by one actor (Timothy Gulan). Bustopher is fun but Gulan’s great Gus tenderly captures your heart. Jellylorum’s (Kaitlyn Davidson) warm, clear voice introduces Gus with the proper reverence.

The musical’s most famous number, Memory, belongs to Grizabella (Keri René Fuller). Fuller’s rich voice showcases the song’s beauty but doesn’t reach the soaring heights of the originals (Elaine Paige in the UK and Betty Buckley on Broadway). Fuller doesn’t capture Grizabella’s hideousness and loneliness. This Grizabella isn’t shunned enough, which undermines the emotion of the play’s turning point.

The original production began its life as a song cycle and plot-wise it never evolved, something its critics deride. But whether you find it silly or whimsical, the show has always impressed – and still does with the pure energy and physical strength it takes to perform wearing miles of spandex and fur. John Napier’s original scenic and costume design remains charmingly intact.

Even with updated choreography by Andy Blankenbuehler (from Broadway’s Hamilton), Cats will always be an 80s relic. But beyond the leg warmers and acrobatics it contains moments of timeless spectacle.