NOW MagazineCultureMusicalsCome From Away will move even the most cynical viewer

Come From Away will move even the most cynical viewer 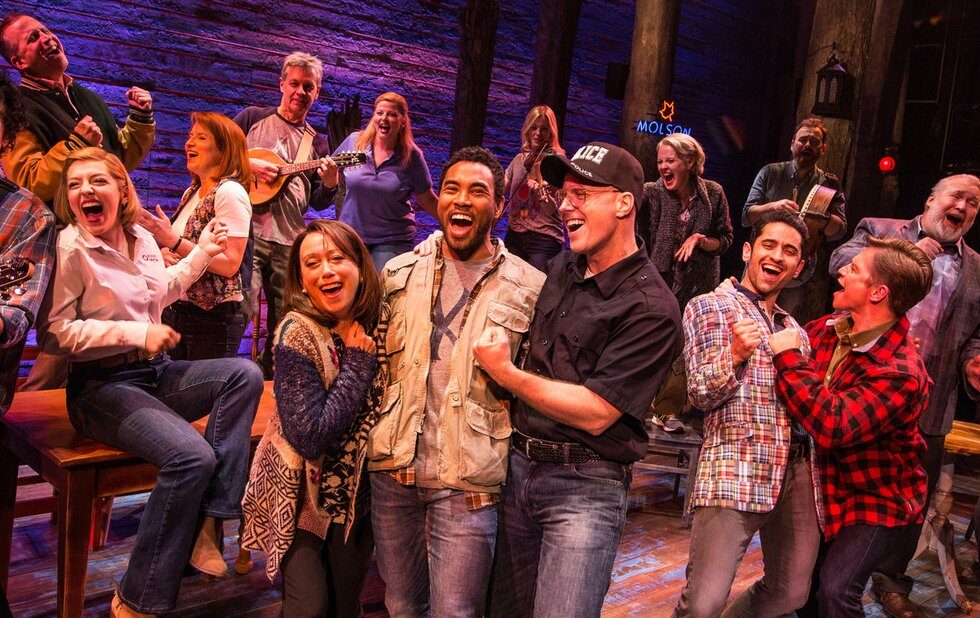 Something about the tragedy and the compassion that emerged from 9/11 seems to have imbued writers Irene Sankoff and David Hein with new gifts.

I disliked intensely their previous piece, My Mother’s Lesbian Jewish Wiccan Wedding. But Come From Away’s  music – fuelled by a kick-ass band – is rollicking, the lyrics are clever, especially when they press themes, as with I Am Here and On The Edge (of both the world and a nervous breakdown) and I don’t think I’ve ever seen a show with more heart.

It starts by introducing its Newfoundland characters via the foot stomping Welcome To The Rock and then just barrels along, its cast doubling up on roles as Ganderites and passengers. You get a real sense of the panic of the travellers as they’re suddenly rerouted to Canada, thrown onto buses and deposited to what they consider to be the middle of nowhere. But their hosts are unfailingly warm as the population of their town suddenly doubles and they have to figure out how to cope.

Via myriad interviews, Hein and Sankoff alight on fascinating real-life characters: the pilot Beverly (Eliza-Jane Scott), also the first female captain at American Airlines the reporter Janice (Steffi DiDomenicantonio) on her very first day on the job the middle-aged duo Nick (James Kall) and Diane (Barbara Fulton), who meet and fall in love a gay couple (Ali Momen and Jack Noseworthy), who find residents of the Rock more open than they expected, to name just a few.

The Canadian ensemble (the original cast is still lighting up Broadway) is super tight and the performances are excellent. Lisa Horner plays the Gander matriarch Beulah with warmth and command. As the mistrustful Black Brooklynite, Kevin Vidal finds the right balance of fear and wonder, and Scott is a knockout as the passionate pilot who can’t believe that airplanes, her favourite thing in the world, have become the terrorist weapon of choice.

Christopher Ashley, who won a Tony award for direction, keeps everyone moving non-stop, ingeniously recreating the vibe on a plane, on a careening bus or in a packed bar. If anything, it all moves at almost too much of a breakneck speed. There is some dark content here – a mother (luminous Saccha Dennis) anxiously awaits news of her firefighter son in New York City, the Egyptian Ali (Momen) is treated appallingly at times – and a moving sequence shows the diverse characters in prayer.

Still, the pace never lets up. Occasionally, you do wish you could catch your breath.

But so what? Just go with the flow and have a great time.