FUN HOME by Jeanine Tesori and Lisa Kron, from the graphic novel by Alison Bechdel (David Mirvish/Musical Stage Company). At. 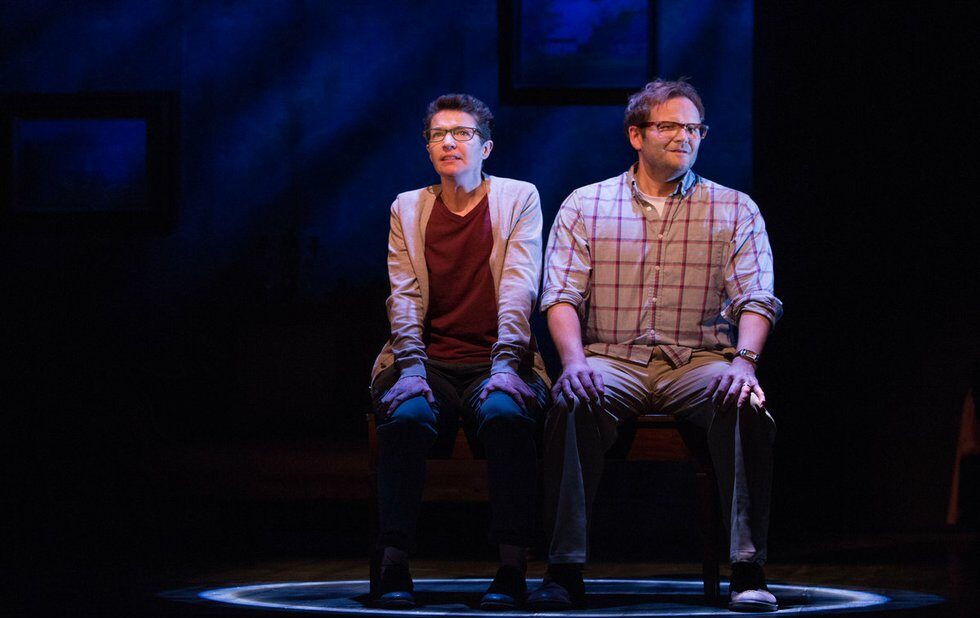 Laura Condlln and Evan Buliung take you on an unforgettable ride in Fun Home.

He does that and a lot more. As were told early on (its not a spoiler), Bruce, a high school English teacher, house restorer, manager of the family funeral home (the title is a pun) and father of three, is also gay. And four months after the narrator herself comes out while in college, Bruce will step in front of a truck a probable suicide.

Now the same age as her father was when he died, Alison (Laura Condlln), an established cartoonist, attempts to understand why he killed himself. The show takes her back to the house, sketchbook in hand, where she revisits her earlier selves as represented by 10-year-old Small Alison (Hannah Levinson) and college-age Medium Alison (Sara Farb) interacting with Bruce, mother Helen (Cynthia Dale), and brothers Christian (Jasper Lincoln) and John (Liam MacDonald).

The early Bechdel family life is one of pleasing surfaces, with everyone accommodating overworked, fussy dad. Gradually, thanks to older Alisons perspective, we see that things arent as cheery as they appear, such as a key scene in which uptight mom plays piano upstairs while dad seduces a former student (Eric Morin, who plays a variety of men and boys) downstairs.

As the show progresses in refreshingly non-linear fashion, we see the teenage Alison awkwardly grappling with her sexual orientation in college Condllns reactions to her younger selfs gaffes are amusing while child Alison experiments with drawing, balks against wearing dresses and, in one of the shows most poignant songs, feels a sudden kinship after momentarily seeing an older butch lesbian.

The material is as complex and full of pathos and humour as any great American play, with director Robert McQueen and musical director Reza Jacobs expertly shifting the moods and moving the piece along briskly, helped out by Camellia Koos suggestive sets (they fill up the big CAA Theatre space nicely) and Rebecca Picheracks subtle lighting.

I cant imagine a better Canadian cast in this Musical Stage Company/Mirvish production. Dale evokes Helens denial and her stunted life in a few lines and a poignant second-act song. Condlln makes an engaging, soul-searching sleuth, guiding us through her life with humour and humility: the climactic duet in which she replays a significant car ride with her dad, wondering if she could have prevented his death, is almost overwhelming in its intensity.

Farb captures Medium Alisons spontaneity and nervous energy with skill, especially in an endearing number about falling in lust. And Levinson, who trod the boards as Matilda a few years ago, has matured into an expressive, disciplined singing actor with a laser-like focus.

But the shows most fascinating character is the mystery man at the centre. Buliung’s posture and carefully modulated voice reflect Bruces conflicted nature, and he miraculously makes this secretive character, complete with rages and morally questionable behaviour, empathetic.