GIRL FROM THE NORTH COUNTRY by Conor McPherson, with music and lyrics by Bob Dylan (Mirvish). At the Royal Alexandra. 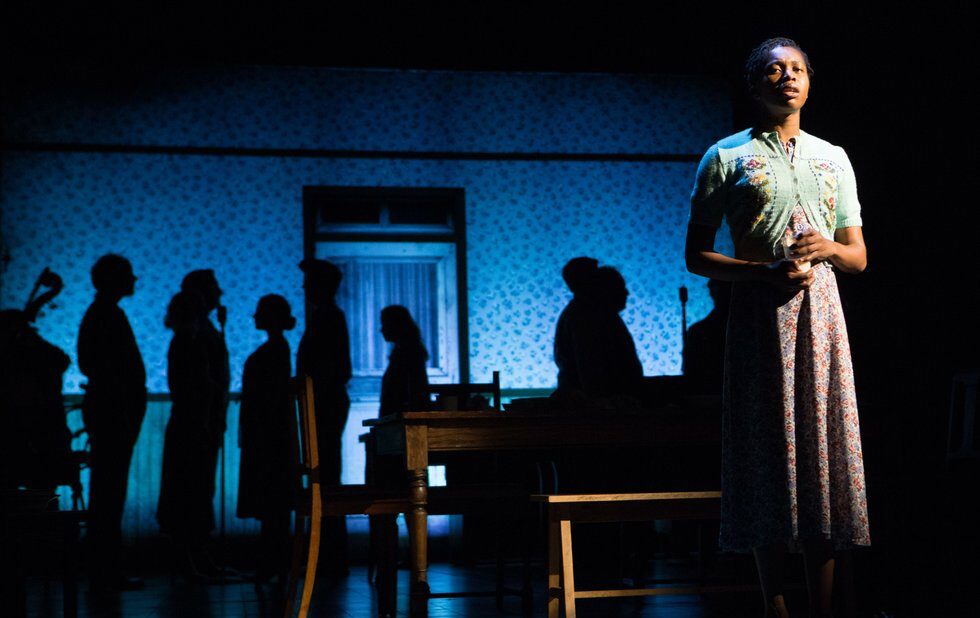 First, let me declare my bias. I am a Bob Dylan admirer, rate Blonde On Blonde as one of the top five recordings ever made and believe Dylan deserved his Nobel prize. I am also passionate about musical theatre. But heres the thing. Girl From The North Country, the stage piece based on Dylans music, is actually an anti-musical.

It has no plot, no texture and, worse, the songs have no connection to the weak characters who sing them.

Set in the Depression at a boarding house in Duluth, Minnesota (Dylans birthplace), Girl parades out a series of characters, all in dire straits. Boarding-house owner Nick (Donald Sage McKay) tends to his wife Elizabeth (Katie Brayben), who has dementia, while hes having an affair with his tenant Mrs. Neilsen (Rachel John) and trying to find a husband for his adopted pregnant daughter Marianne (Gloria Obianyo). Mostly, hes trying to avoid bankruptcy.

Also in the house: a corrupt preacher (Finbar Lynch), an ex-con boxer (Shaq Taylor), the drug-addicted Dr. Walker (Ferdy Roberts), who also acts as narrator and a host of other desperate characters.

This is not jukebox musical. For one thing, McPherson is not interested in Dylans hits, which doesnt have to be a bad thing, given that Dylans B-list is better than most songwriters prized nuggets. But its a disaster when characters break out into songs that bear tenuous connections to their poorly defined situations.

So, for example, Nicks son Gene (Colin Bates) performs I Want You with a female character who suddenly hits the stage with no backstory. At least the song has a sliver of context. Shes leaving, he wants her. But most of the time we have no idea why characters are singing the songs.

It doesnt help that the songs themselves bear no resemblance to show tunes. They are among Dylans mopiest compositions, mostly about love sought and lost and arranged almost always in the same way: slow first verse, slightly speeded up for the rest of the song, with choruses superbly backed up by several singers.

The few exceptions are an incendiary performance by Brayben of the first two verses of Like A Rolling Stone but, seriously, why? This famous takedown of a female in free fall has no meaning here. Dressed in a white suit, Steffan Harri drops his persona as the developmentally challenged Elias to sing Duquesne Whistle an almost show tune like a vaudeville performer. Huh?

The only real showstopper you could call it the 11-oclock number is Hurricane, and it only makes you wish for more like it.

The performers, many of whom pick up instruments to join the band, are uniformly superb. Brayben, as a woman slowly losing her mind, but, ironically, the only one with a handle on the truth, is brilliant singing Like A Rolling Stone like Alanis on dexies. Then again hers is the only character written with much depth.

Also excellent is Obianyo, who sings an incandescent version of Tight Connection To My Heart, the first song that features the companys glorious chorus, her voice resonating gorgeously in the lower registers. It was so wonderful that the audience wanted to applaud. But this anti-musical is constructed in such a way that theres no room for audience appreciation after the musical numbers.

Designed by Mark Henderson to reflect the times, the show is low-lit, with backdrops of dreary landscapes. McPherson, an Irish playwright, seems to have read Of Mice And Men too many times.

There are a few chuckles along the way but Girl From The North Country is otherwise a gloomy thing and a waste of its composer and its highly skilled performers.

Im not sure even Dylan fans will like it.