NOW MagazineCultureMusicalsHomegrown musical Come From Away impresses critics on Broadway

Homegrown musical Come From Away impresses critics on Broadway

New York City Come From Away, the homegrown musical that received unanimous praise and a sold-out run when it. 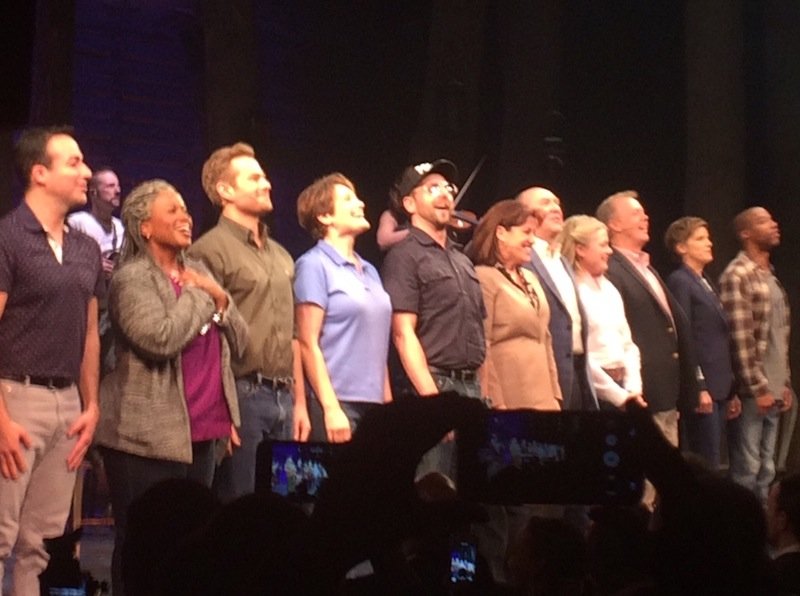 The cast of Come From Away on opening night

New York City Come From Away, the homegrown musical that received unanimous praise and a sold-out run when it played Toronto from November to January, has now opened on Broadway to excellent reviews. Most importantly, it received a rave and a Critics Pick from the influential New York Times.

You just never know how something is going to be received, said co-writer Irene Sankoff, when I asked her about that particular review at the shows afterparty at New Yorks Gotham Hall, several blocks south of the 1,000-seat Schoenfeld Theatre, where the show officially opened on Sunday after several weeks of previews.

Nearly every review of the Broadway production mentioned the potential difficulty of dealing with the tragedy of 9/11, and Sankoff and co-creator (and husband) David Hein have been careful in not calling it a 9/11 show but rather one about 9/12 and the days after.

The work, drawn from hours of interviews, chronicles what happened when 38 international flights were redirected to Newfoundlands Gander airport and deals with the welcome and hospitality the passengers found there.

We just really wanted to honour these stories, said Hein, at the shows party. He still seems genuinely surprised and moved by the response to the show, even after positive reactions during its previous stops in Toronto, Washington, D.C., Seattle and La Jolla.

Some changes since the Toronto opening include an extended song for Hannah, the mother of a New York firefighter, and small cuts to dialogue to make it even sharper and tighter. During the shows rousing sequence set in a bar, one of the bands musicians rather than cast member Jenn Colella now plays the Newfoundland ugly stick.”

On Sundays opening, the audience got to its feet before the final number was even finished. In the audience and/or the afterparty were famous Canadians like Louise Pitre, Victor Garber, Steven Gallagher, Chilina Kennedy and Sergio Trujillo.

Im especially proud of the show as a Sheridan grad, said Kennedy, currently on hiatus from the Carole King musical Beautiful (shell be coming to Toronto with it this summer, after playing the role on Broadway for two years). Come From Away was originally developed at Sheridans Canadian Music Theatre Project under producer Michael Rubinoff.

(Disclosure: I saw that early workshop and became a partial investor in the current production last year, long before the Toronto engagement I didnt write NOW’s review.)

Choreographer Trujillo, whose current show A Bronx Tale is, along with Come From Away, one of several new musicals in a crowded post-Hamilton year, is currently working on several projects with his Jersey Boys collaborator Des McAnuff: one based on the songs of the Temptations, the other based on the songs of disco queen Donna Summer. The Gloria Estefan musical On Your Feet!, which he choreographed, is still packing in audiences in the Big Apple.

Canada taught me the importance of kindness and giving, Trujillo said about Come From Away and how it might resonate in todays political climate.

And did Hein and Sankoff, when they workshopped the show back at Sheridan, ever think it would make it to Broadway? Or that the Prime Minister would be attending later this week?

Hein gives me a look that says, Youre kidding, right? He also takes out his cellphone to show me a photo of supermodel Cindy Crawford posing with them after one of last week’s previews.

You realize this was a teenage dream of mine, right? he laughs.

Honestly, I thought the show would play well at colleges and high schools, says Sankoff. I never dreamed of this.