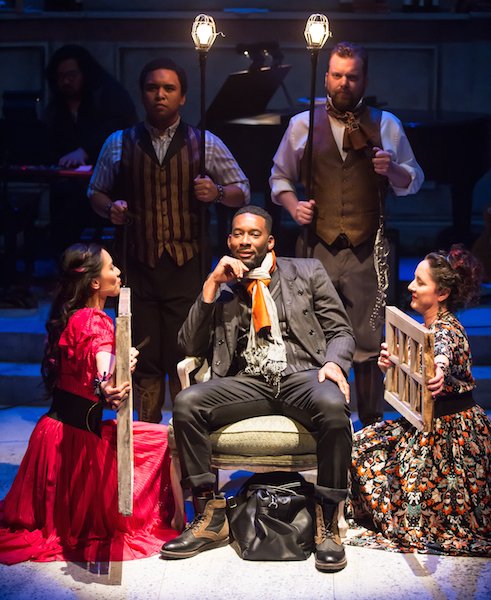 Amiel Gladstone and Veda Hilles folk and indie rock Onegin based of course on Pushkins poem and Tchaikovskys opera is exquisite.

But I would have been even more impressed had I not already seen Dave Malloys Natasha, Pierre & The Great Comet Of 1812, a reimagining of a section of War And Peace. Gladstone and Hilles approach to the material both musically and dramatically is so similar that comparisons are unavoidable. Oh yeah, and theres a scene or two that owes a debt to another Broadway hit, Hamilton.

Still, Pushkins story, about how the haughty and restless Evgeni Onegin (Daren A. Herbert) rejects the affections of the younger Tatyana (Hailey Gillis) which sets in motion a tragic duel between friends and a table-turning sequence set six years later is built for the oversized passions of a musical, and Gladstone and Hilles tuneful, memorable songs do justice to the source material.

Whats impressive is that the score mostly follows the structure of Tchaikovskys opera, including Tatyanas letter scene (given an added jolt when Gilliss energized character picks up a guitar for a couple of aggressive strums) and a passionate, heartbreaking 11th hour duet. Theres even a riff on one of Tchaikovskys distinct musical phrases in the opening number.

Gladstone and Hille cant reproduce the beauty of Onegins friend Lenskys (Josh Epstein) melancholy pre-duel farewell aria or Prince Gremins (Shane Carty) stately philosophical number. But thats asking a lot. These and other songs are catchy in their own way and they have a sense of humour that Tchaikovsky lacks.

Director Gladstone makes clever use of the space, letting the audience take part in delivering letters, for instance. Denyse Karns set, dominated by sets of old windows through which trees have grown, is gorgeously lit by John Webber.

And the cast is comfortable mixing the old and new a phrase that could also apply to Alex Aminis handsome costumes, some of which you could easily see in Kensington Market.

From the start, Herberts posture and the sneering way he sings his lines tells you a lot about his character, while Gillis, so poignant in Soulpeppers Spoon River, digs into even deeper emotional territory here.

Most effective is Epstein, whose presence is felt even when hes not onstage. When he implores the audience to think of who they would die for in this world, it touches the heart something too few musicals do these days.