NOW MagazineCultureMusicalsJames And The Giant Peach isnt quite ripe

James And The Giant Peach isnt quite ripe

JAMES AND THE GIANT PEACH words and music by Benj Pasek and Justin Paul, book by Timothy Allen McDonald (Young. 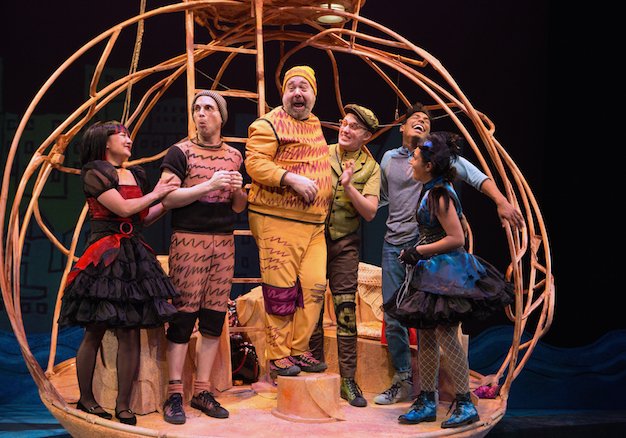 Roald Dahls childrens classic James And The Giant Peach is both a fine adventure story and a suggestive tale about the importance of family of choice.

Adaptors Benj Pasek and Justin Paul (words and music) and Timothy Allen McDonald (book) capture something of both those strengths, but despite some catchy tunes and good performances in this Young Peoples Theatre production, the musical takes too long to engage its young viewers.

Orphan James (Matt Nethersole) finds himself taken in by his two self-centred, affectionless, greedy aunts, the commanding Spiker (Amaka Umeh) and the less swift Sponge (Amy Lee). The pair set him the task of chopping down a peach tree, but when he spills a magical potion on the tree, it grows a single giant peach and turns five insects into human-sized companions for James. Inside the peach, James and they roll into the ocean off the coast of England, first floating and then flying westward.

What works in the book seems slow when explained onstage, even in the musicals sometimes reworked, cut-down narrative. Its only when the six runaways climb into the peach that the show picks up dramatic steam. Earlier, under musical director Jason Jestadt, there are some good songs, including a ballad sung by the lonely James and a livelier number in which the aunts and various gold-diggers laud the giant peach’s financial potential.

Under Nina Lee Aquinos direction, things are much more involving aboard the peach with the boy and his mates: Centipede (Bruce Dow), Earthworm (Amir Haidar), Spider (Shruti Kothari), Grasshopper (Robert Markus) and Ladybug (Jennifer Villaverde). Each insect has a strong personality and, in Joanna Yus costumes and on Teresa Pryzybylskis jungle gym-like peach set, lit by Rebecca Picherack, a moment to shine.

The five become a caring family for James, and they learn to accept each other and work together to solve their problems.

The show has some fun as well as a lesson about whos important in our lives, but the sometimes restless young audience signal that they’re not as absorbed in the story and the characters as they might be.