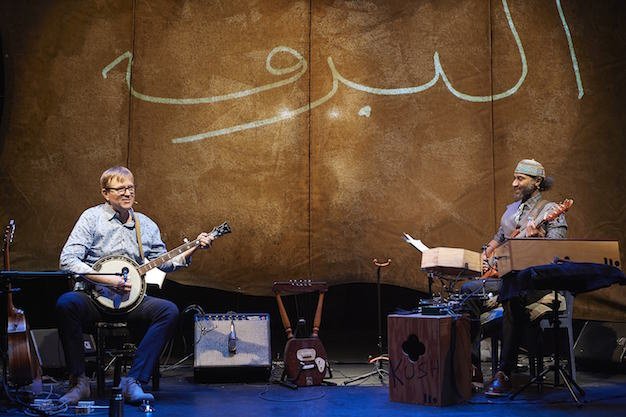 John Millard, from Kitchener-Waterloo, and Waleed Abdulhamid, from Sudan, have worked together for years as artists in residence at the Young Centre. With director/dramaturg Marjorie Chan and dramaturg Andy McKim, theyve assembled a show that looks at where each comes from, the kind of music he makes and how their lives have intertwined.

You can see the evening as a concert, but its reach is wider: a brief, non-technical look at Western versus Eastern music, the history of a string instrument, some thoughts on immigration in the past and today, a subtle but pointed reminder of slaverys horrors.

The songs are in English and Arabic, a blend of the two mens backgrounds, childhood melodies, folk songs, a call to prayer and politically inspired tunes. Theyre all engaging, the kind of music has you tapping your foot. Often the text and melody link in a compelling fashion.

They both play and heres part of the musical history lesson, delivered as an epilogue the banjar, an African instrument with a gourd base brought over to the New World and which became the southern banjo. As Abdulhamid explains, in Africa youre not given a piano or a guitar people often have to make their own instruments with what they have on hand.

Each recounts personal anecdotes in between songs, including a fight they had as Abdulhamid tried to teach Millard a tricky African song and a racist experience the Sudanese had with an airport immigration officer.

Projections by Kaitlin Hickey literally form a background for the music and stories, including song titles in English and Arabic and a powerful image of individual humans who float together into a group and then are encircled by a frame. The image resolves into a depiction of the Middle Passage, African slaves packed into a ship as it travels to deliver its human cargo.

But at the end of the show theres also a video of Torontonians of all backgrounds, with big smiles on their faces, and the projection that follows, in capital letters, says Welcome. Thats the message we take away, along with 90 minutes of musical entertainment.

You can pick up a copy of the heartfelt lyrics, the Arabic translated into English, at the box office along with your program.