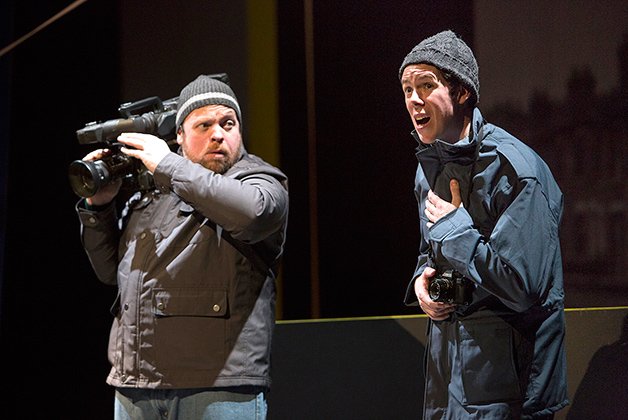 Taking a trip along London Road will change your idea of what heights musicals can scale.

Alecky Blythe and Adam Cork’s documentary musical is inspired by the murders of five prostitutes in the mid-aughts in the Suffolk, England town of Ipswich. Since the women are dead and the killer – whose apprehension and trial are covered in the show – is in jail, the book and lyrics are drawn from interviews with the neighbouring residents.

Their statements – repeated verbatim, with “ums,” “ahs,” non sequiturs and contradictions included – form the spine of the show. And while the style takes some time to get used to, especially in the first half, the payoff is remarkable, amounting to a rich portrait of humanity in all its complexity.

The opening sequence features group leader Ron (George Masswohl) heading a neighbourhood meeting, and it’s followed by a scene in which Julie (Fiona Reid) introduces us to an initiative to help beautify the sullied district with a flowerpot competition.

The episodes that follow – conversations in pubs, cafés, private homes and public areas, as the police and then journalists descend on the area – expand the world of the piece, each scene given a musical character that matches the text: gossipy, lyrical, hopeful.

All of this sets us up for the powerful second half, in which Blythe and Cork lead us to examine the class system, the arbitrary nature of crime (the use of a raffle beautifully integrated into one scene) and the idea of forgiveness and redemption.

There’s as much pathos and anger as there is humour. In one scene, three prostitutes discuss how the murders have affected them in another, Julie admits she would shake the murderer’s hand for clearing the streets of those women and in a hilarious sequence, a journalist (Damien Atkins) stumbles repeatedly in a segment because he can’t say the word “semen” for a daytime broadcast.

The performances are revelatory, from the pit to the stage. Each actor plays about 10 roles, altering their character physically and vocally to bring this complex story to life with dignity and truth.