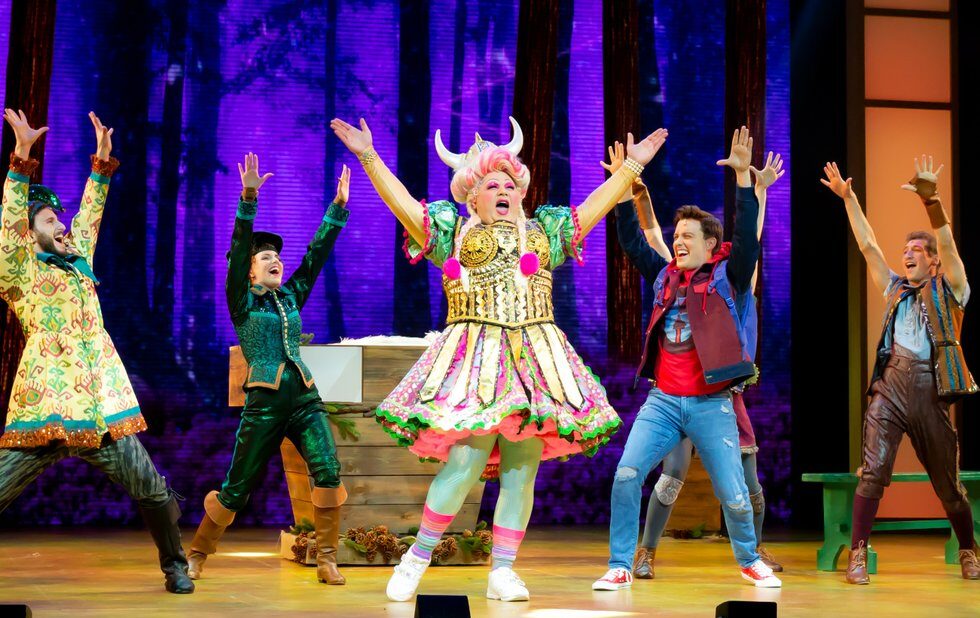 Last years Ross Petty Productions annual panto was one of the strongest in years. This years show, Lil Red Robin Hood, is even better.

Sara-Jeanne Hosie, who made such a splash as the villain last year, returns in that role. Eddie Glen, AJ Bridel, Daniel Williston and Michael De Rose as Sugarbum also return and act as a tight-knit ensemble. Matt Murray has again written a clever, well-focused script that encourages lots of audience interaction and Tracey Flye returns to the helm to give the show a quick pace and adds a more hip-hop flavour to her vibrant choreography.

The strongly underlined theme is the negative impact of provincial cuts to education. A high schooler nicknamed Lil Red (Robert Markus, so impressive in the title role of Dear Evan Hansen) is whisked back in time to 1519 to Sherway Gardens Forest. There Maid Marion (Bridel) and Robin Hood (Lawrence Libor) have split over a difference in goals. Robin still wants to steal from the rich and give to the poor, but for Marion, the only teacher left in the forest, the priority is to stop the evil Sheriffe of Naughtyham (Hosie). The Sheriffe (pronounced sher-REEF), aided by her wizard henchman Marvin (Glen) want to deprive all communities of teachers and books so that she will be proclaimed the smartest person in the world.

As the perky Bridell observes in a remark with clear resonance beyond Ontario, Isnt it terrible how much damage one bad person in power can do?

All seven main performers are equally strong as singers and actors. Hosie has a commanding presence and seems to thrive off the audiences animosity. Like Pettys best villains, she combines bombastic menace and hilarious ad libs with moments of self-deprecation. She has powerful singing voice and has the same hearty rapport with Glen that Petty did.

In his 17th Petty panto, Glen is still the mischievous character audiences have loved all these years. This year he finally gets a solo, Foreigners Cold As Ice, which he absolutely slays, and does an uncannily spot-on Trump impersonation.

Its a pleasure to see Markus throw off his anguished Evan Hansen persona and play just an everyday teen. He starts the show off with a jolt of vitality with his joyful account of Panic at the Discos High Hopes.

Because Come From Away was held over in the Elgin Theatre below, this is the first time a Petty panto has played in the Winter Garden Theatre. Children are wonderstruck when they see a magical, forest-like auditorium, a perfect venue for a Robin Hood story as dreamily designed by Michael Gianfrancesco.

The Winter Garden is a more intimate venue than the Elgin and brings the action closer to the audience. Future Petty pantos should make this venue their new home.