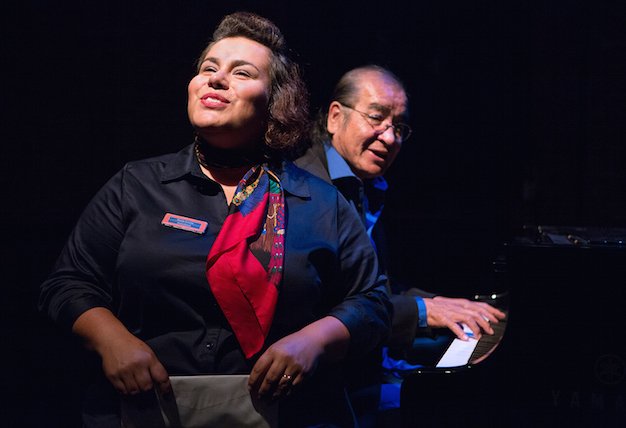 At the centre of Tomson Highway’s musical The (Post) Mistress (its French title is Zesty Gopher s’est fait écraser par un frigo), Cano plays the energetic Métis Marie-Louise Painchaud, head of the post office in the small town of Lovely, Ontario, not far from Complexity, Ont.

Charged with being sure that the right mail gets to the right person, she’s also a kind of therapist, listening to the problems of the town’s inhabitants and offering her advice, at least to the audience. Through her eyes, we meet more than a dozen of the townspeople and those who write to them.

Marie-Louise hasn’t travelled much because she has a fear of flying, but she gets a sense of the world from the letters she handles. We learn that she’s distanced from her husband but don’t discover the reason until near the show’s end.

Against Teresa Przybylski’s simple but impressively monumental set of postal pigeonholes, lit by Michel Charbonneau, Cano creates a charming storyteller, apparently able to read the thoughts of various correspondents through the envelopes.

The writers come from all over, their words inspiring musical numbers in which Highway draws on a variety of styles: samba, Dixieland, ballad, waltz, jazz, lullaby and more. A couple have the feel of Jacques Brel tunes, a combination of the spoken and the sung.

Among the standouts are a sexy, no-holds-barred tango, a tender fairy tale-like song to a child and a prayer sung in Cree. The show’s last number blends the production’s three languages: French, English and Cree.

Cano performs each with a powerful voice and, singing from the heart, the ability to inhabit the feeling of words and music. With a great laugh and a sparkling personality, the actor/singer wins us over with numbers that run the gamut from the up-tempo to the melancholic.

There’s more than a touch of whimsy and magical realism, though in the first act the sung numbers are more effective than the spoken narratives. That surface delivery of several spoken stories disappears in the second act, which at its French-language opening began with mike problems Cano saved the situation with an endearing shrug and a quick pick-up of the lost lines.

Presented by Pleiades Theatre and Théâtre français de Toronto as the opener for the latter’s 49th season, the production is warmly directed by John Van Burek, with Cano accompanied by Highway on the piano and sax player Marcus Ali, who occasionally become part of the action.

The (Post) Mistress runs in French with English surtitles until October 23 and then in English with French surtitles from October 25 to November 6.