NOW MagazineCultureMusicalsSunday In The Park With George is intimate and ambitious

Sunday In The Park With George is intimate and ambitious 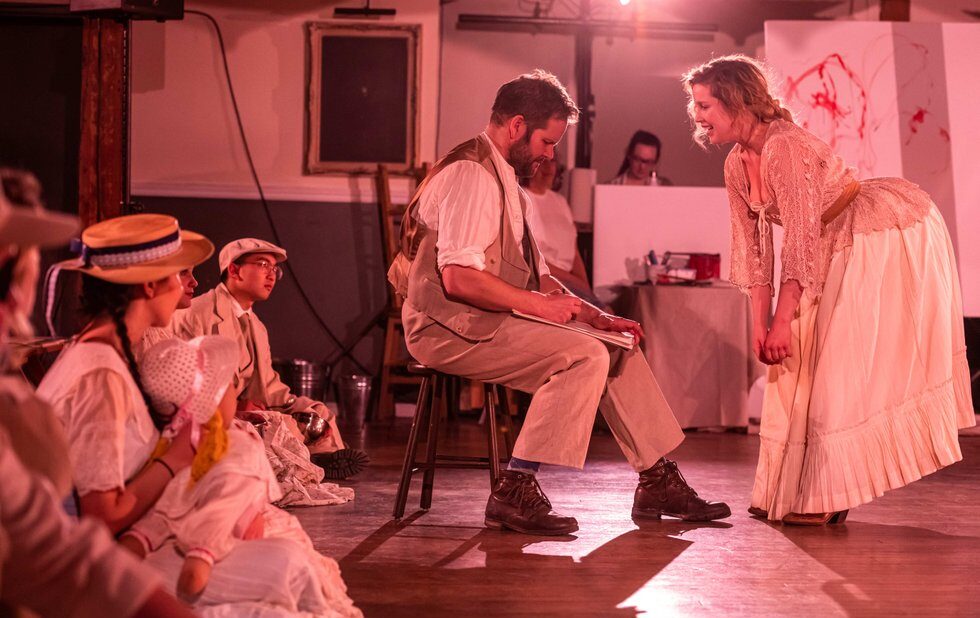 Last year Eclipse Theatre Company debuted with a terrific, sold-out production of Kiss Of The Spider Woman, performed at the old Don Jail. The east end Jam Factory isn’t quite as effective a venue for their latest show, Sunday In The Park With George. But this “event” – the company says their shows lie somewhere between staged concerts and full productions – offers lots to admire. (Note: I saw the show’s one preview performance.)

Stephen Sondheim and James Lapine‘s Pulitzer Prize-winner has never received a full professional Toronto production before, and it’s almost understandable it’s a tough sell. Narratively episodic and more cerebral than deeply felt, it’s a fantasia inspired by the life and art of French pointillist painter Georges Seurat. The admired first act ends with a recreation of his well-known 1885 canvas, A Sunday Afternoon On The Island Of La Grande Jatte. The more problematic second act flashes forward 100 years to look at Seurat’s artistic, and even genetic legacy.

What’s surprising in this version is how intimate and refreshing the show feels in this partial staging. Perhaps that’s because director Evan Tsitsias doesn’t attempt realism, even in that first act closer. The venue has an antique warehouse feel, complete with wooden support beams that occasionally block sight lines but make a believable enough studio garret for George (Evan Buliung) and his model/mistress Dot (Tess Benger). A little more imagination is required for scenes set outdoors, however um, so now the wooden post is a tree? Wendy Lundgren‘s often garish lighting design doesn’t always help matters. (Neither does the sound of the Don Valley Parkway through the drafty windows.)

But by having chorus members – many from Sheridan College – often surround the audience, which is divided into two halves, Tsitsias achieves an immersive, intimate feeling. This works beautifully for the conclusions to both acts, where Sondheim and Lapine’s choral writing achieves musical theatre transcendence.

Because of the audience’s proximity to the playing area many of the secondary players register more fully than they would in bigger venues. Eric Craig‘s Jules, one of George’s bourgeois art rivals, and his wife Yvonne (Tracy Michailidis), are particularly strong so is Charlotte Moore as George’s irritable mother, whose song about capturing life in all its fleeting moments is superb. Even Ben Skipper‘s gruff Boatman comes across with lots of personality.

Buliung, as strong an actor as he is a singer, seems constrained by the first act’s limitations George is your typical self-absorbed, misunderstood genius. But he finds different colours later on as a character who’s more vulnerable and open to human connection.

Benger has a small voice – the actors aren’t amplified – but she finds a wide range of expression in both the restless Dot and, a century later, a frank grandmother.

Tsitsias’s idea of having an actual artist, Lori Mirabelli, paint, in real time, during the first act, doesn’t add much to the show, and the first-act finale, which should result in a bit of theatre magic, ends up merely being cluttered. Furthermore, the show’s final, meta-theatrical tableau, seems unnecessary.

But I’d rather see a production with too many ideas than not enough. Eclipse Theatre remains one of the more intriguing new companies on the scene.