Filled with folkloric and fantastical elements, Adam Pottle's show is imbued with humanity and heart 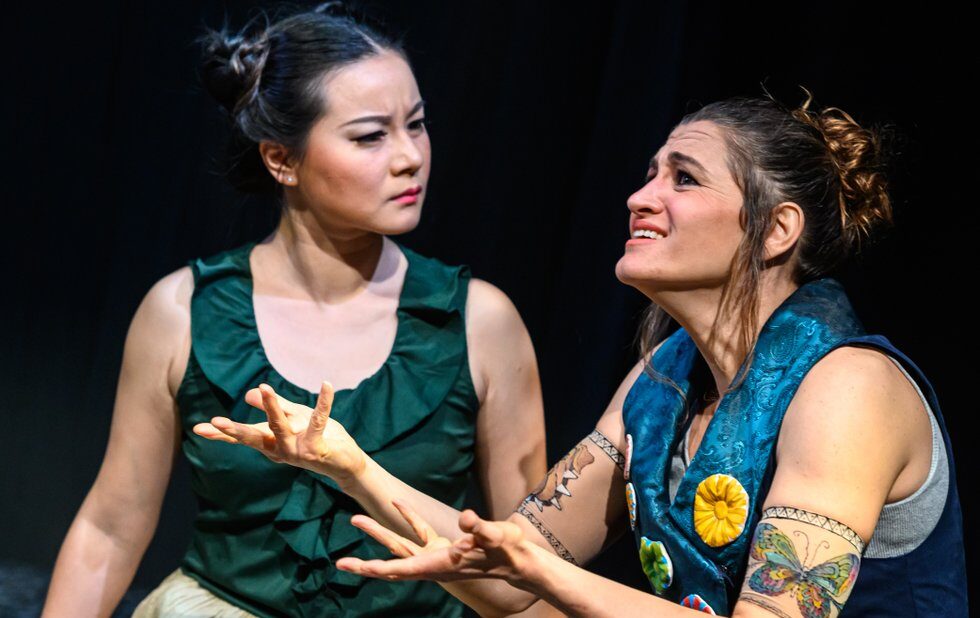 The Black Drum is a musical written by deaf Canadian playwright Adam Pottle, staged by deaf Norwegian director Mira Zuckermann and performed by deaf actors. In her program notes, Zuckermann ponders, “What do Deaf people define as music?”

The Black Drum explores this and ensures answers are accessible to both the deaf and non-ASL communities in an illuminating and visually stunning production.

A love story with folkloric and fantastical elements, the simple plot revolves around Joan (Dawn Jani Birley), a woman distraught over the death of her wife, Karen (Agata Wisny). The play follows Joan’s journey to healing and realizing her strength. To help along this odyssey, her two beautiful tattoos come to life as guides – a butterfly (Yan Liu) and a bulldog (Daniel Durant). Together they encounter other characters who represent the forces of good. However, a dark, controlling power known as the Minister (Bob Hiltermann) repeatedly impedes their progress.

With the assistance of a large creative team, Zuckermann uses technology throughout the show, both for visual effect and as a communication tool. Pottle has organized the play into short, distinct scenes, and Laura Warren’s projections allow the production to change settings quickly and create different moods. Vast bodies of water appear in beautiful blues or eerie blacks and greys bright-green trees sway and flowers bloom. Chris Malkowski’s lighting often works in tandem to amplify the impact.

The production never feels constrained by this technology because the actors imbue it with humanity and heart.

Birley, who captivated audiences with her energy earlier this year as Horatio in Why Not Theatre’s Prince Hamlet, undertakes a more nuanced role here. Her face is particularly expressive but she conveys a range of emotions with her whole body. Wisny brings an otherworldliness as the dead wife, Karen. She moves with a dancer’s physicality. When under the spell of the Minister she resembles those twirling ballerinas in a child’s jewellery box. Hiltermann’s Minister is thoroughly terrifying, an evil force of nightmarish proportions.

Near the end, Hiltermann also plays one of two gigantic drums used in the production. The drum beat is an inventive way for the Minister to maintain control of the others. (Another drum is used throughout by percussionist Dimitri Kanaris.) The drums’ vibrations add an interesting layer to the experience of the performance keep in mind that the high level of bass amplification can at times feel jarring.

Non-ASL audience members (I am one) may miss out on the minutiae of the plot, but each scene leads off with a voice-over synopsis so everyone can follow.

Opening night was capped off by the audience applauding in ASL, which looks like jazz hands and is captivating to behold.