THE JAZZ SINGER by Michael Ross Albert (Harold Green Jewish Theatre Company/Dancap). At the Toronto Centre for the Arts (5040. 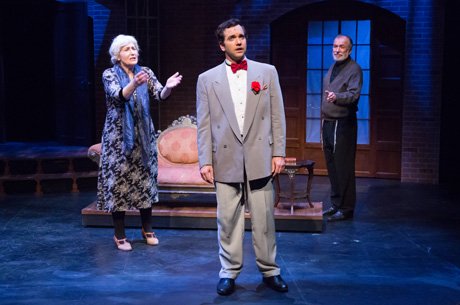 Theres a reason why The Jazz Singer has endured, most famously in two movies one in 1927, starring Al Jolson (who inspired Samson Raphaelsons 1922 short story and subsequent play), and another in 1980, starring Neil Diamond. The tale of faith, art and family is timeless, and its always been a showcase for a terrific singer.

The story comes through in Michael Ross Alberts earnest new adaptation, and so, to some extent, do the songs, which Albert and director Tim French have taken from the late 20s Jazz Age. But Im not sure this show, produced by the Harold Green Jewish Theatre Company and Dancap Productions, has a convincing enough actor to guide it.

Jack doesnt tell her that his family lives in New York and that hes been estranged from them since going into showbiz. His devout father (Victor A. Young) is a cantor who always wanted Jack to be one, too, and his mother (Theresa Tova) has been stuck in the middle.

When Jack reunites with them and discovers his father is ill and the synagogue will be left without a cantor, he has to choose between following his dreams opening night beckons and respecting his family.

The story of familial loyalty remains moving, and I appreciate how Albert has subtly interwoven anti-Semitism into the script so we understand why Jack wont tell everyone hes Jakob Rabinowitz.

Hes less successful in interweaving a subplot about Jacks Black colleague, Oscar (Jivaro Smith), although its more palatable than the blackface used in both film versions. And French, who also choreographs, is hobbled by the limited stage area and the modest-sized cast, especially in the big numbers.

The always watchable Harwood can sell even the clunkiest line, and she delivers a superb torchy version of Stormy Weather, while Tova, her voice dripping with emotion, brings depth and history to her part.

But Cook seems too lightweight as Jack, resting on his glib New Yawk accent rather than digging deep to create something soulful. And as far as playing a character who, according to the script, sings with a teardrop in his voice, Cook is out of his league. Brash and slick, he sings with a smirk in his voice, which doesnt produce the same effect.