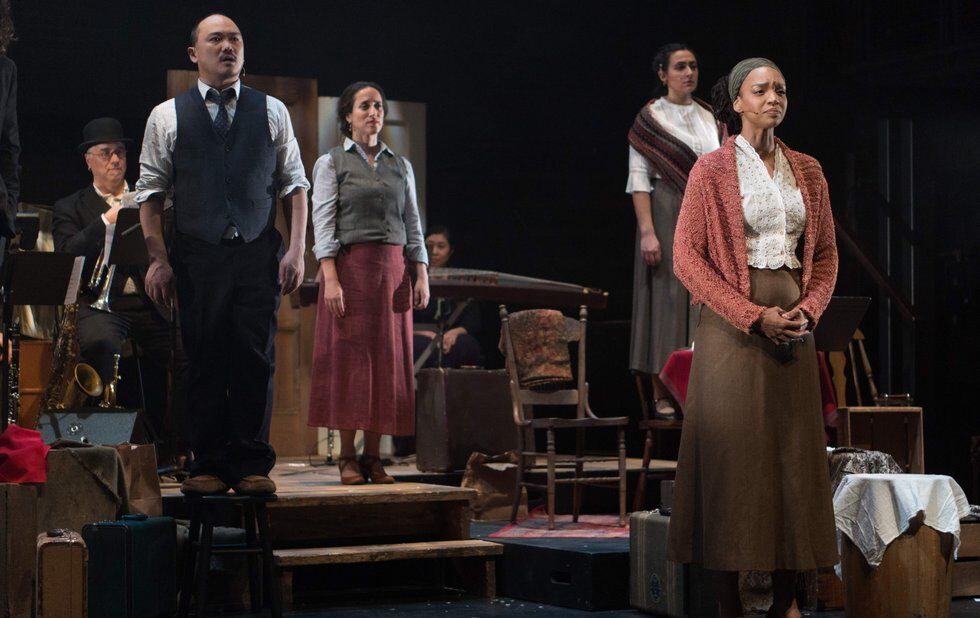 A musical homage to the resourcefulness, tenacity and vivacity of immigrants from Europe, Asia and the U.S. struggling to forge a life in the titular Toronto neighbourhood from the mid 19th and early 20th centuries, The Ward Cabaret is a rousing, if somewhat slight, work of historical entertainment.

Inspired by the book The Ward: The Life And Loss Of Toronto’s First Immigrant Neighbourhood, the show, spearheaded by musician, composer, producer and bandleader David Buchbinder, scripted by Marjorie Chan and co-directed by Buchbinder and Leah Cherniak, has evolved through workshop performances in 2016 and a staging at last year’s Luminato. This latest incarnation is the first full production.

The introductory spoken chorus of exposition, delivered from a mezzanine, feels like heritage theme park material. But this initial stiffness softens as the uniformly superb vocalists, playing only vaguely sketched characters of varied backgrounds, make their way down onto a versatile set where wooden crates and suitcases serve as furnishings – and, at one point, percussion instruments – and Simon Rossiter’s ever-shifting lighting design enhances the sepia tones of the show’s overall visual aesthetic.

The music, always lively and deftly executed, alternates between the folk and art-music traditions of the characters’ sundry ethnicities. The dividing of each tradition is initially so discreet and tidy as to feel a little academic, but this, too, loosens as the show progresses, with passages of playful fusion and impassioned performance. (Clarinetist Jacob Gorzhaltsan has several standout moments.)

An early highlight is Jeremiah Sparks’s a capella I’m Coming To Canada, a song that narrates a journey from Tennessee to Toronto to escape slavery. The melody invokes Stephen Foster’s Oh! Susanna, whose complicated origins draw upon polka, British folk melodies and, most pointedly, minstrel shows. Sparks’s utterly arresting performance somehow alludes to all these elements while rooting itself firmly in the plight of African-American subjugation.

It seems that a key element of The Ward Cabaret is to provide contemporary Torontonians with a stronger sense of the hardships faced by immigrants to this city in the not-so-distant past, yet the play is oddly timid with regards to addressing, for example, racist aggression between minorities, a theme alluded to with only a single passing gesture.

More glaringly, the show features more than one interracial romance and zero push-back from the community, as though fear, discomfort and outright hostility toward miscegenation didn’t exist in old Toronto.

This is part of the reason why The Ward Cabaret’s second act is more compelling than the first: its scenes and dialogue are by this point so minimized as to resemble a mere clothesline for the songs, which become only more spirited, building to a moving, interactive crescendo.

The Ward Cabaret, at its best, is a vibrant celebration of cultural diversity through music but the historical and narrative content too often feels perfunctory.