THE WIZARD OF OZ: A TOTO-LY TWISTERED FAMILY MUSICAL by Matt Murray (Ross Petty Productions). At the Elgin Theatre (189. 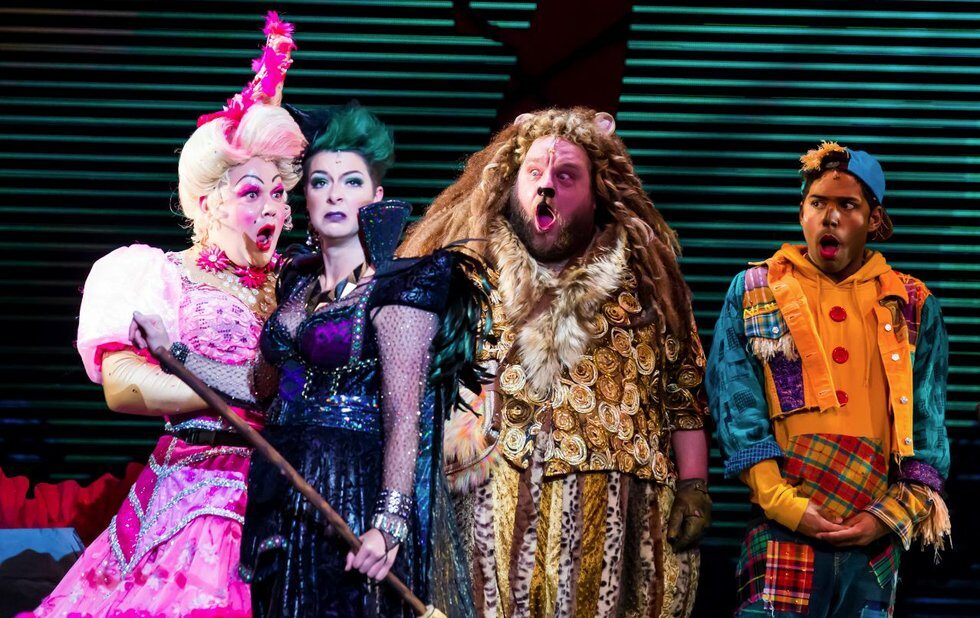 Ross Petty Productions The Wizard Of Oz is the companys best panto in years. No, Petty has not returned as the villain and neither has Dan Chameroy as the wacky Plumbum. What the show does have is a tight, well-written script by Matt Murray, Tracey Flyes taut direction and energetic choreography, five fine singer/actors playing Dorothy and her travelling companions and, best of all, Sara-Jeanne Hosie as the strongest villain to replace Petty since he retired in 2015.

Murray reimagines the Kansas of the movie as present-day pastel-coloured Ossington Avenue. Thanks to global warming, a tornado sweeps through Toronto and whisks Dorothy and Toto to an eye-poppingly vivid Oz (sets and costumes are by Cory Sincennes). The plot is familiar except that instead of Munchkins there are Ozians in charge of making sure Earth has clean air. Meanwhile, the cold-blooded witch Sulphura wants to heat up the Earth with her pollution-making machine.

Hosie plays Sulphura with the same panache that Petty brought to all his villains. She has swagger mixed with a dash of self-mockery and is an excellent singer. Her powerhouse rendition of Donna Summers Hot Stuff won such enormous applause Hosie had to chide the crowd for cheering the villain.

All the leads have strong voices this is one panto you could enjoy simply as a great song-and-dance revue. As Dorothy, Camille Eanga-Selenge is a major talent whose passion while calling out injustice on stage earned her calls of Go girl! from the audience. Matt Nethersole is an endearing Scarecrow and accompanied his snazzy Shake Your Groove Thing with fantastic dance moves. Eric Craig brings out the heartbroken Tin Mans sorrow with a passionate delivery of All By Myself. Daniel Willistons outer fierceness as the Lion comically collapses at the slightest challenge, yet he, too, is a fine singer as his funky rendition of Jungle Boogie shows.

After too many Petty pantos focused only on boos, Wizard brings back a wider range of audience participation, with characters asking children for advice or for help in rescuing Toto.

Such participation engages kids more in the narrative and, when the show is as full of life as this, it elevates everyones mood. Dont miss it.