Waitress serves up pop hits with a surprisingly political message

Set to music and lyrics by Sara Bareilles, this musical contrasts upbeat numbers with an important message about women's autonomy 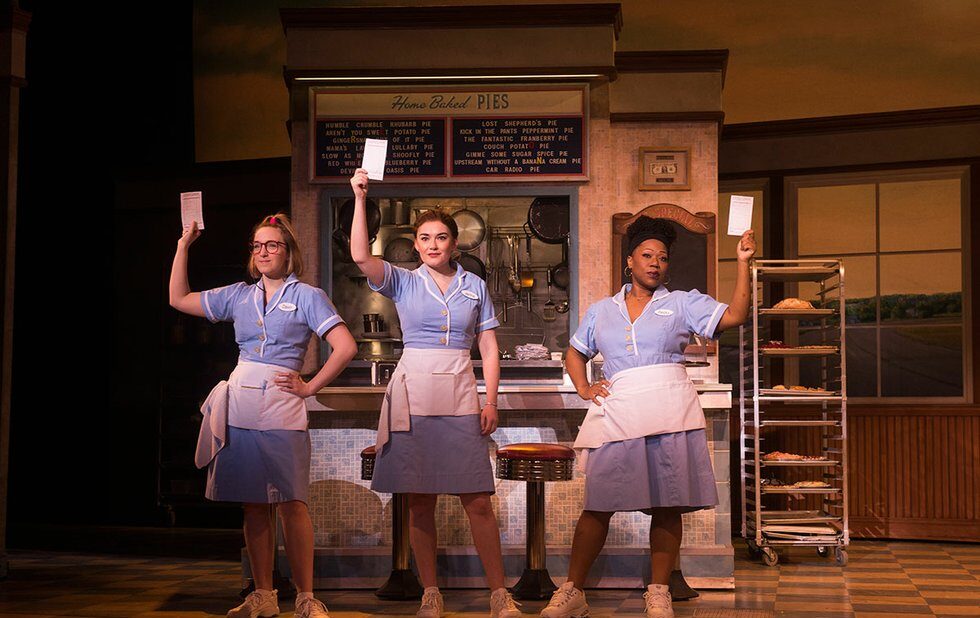 On the surface, Waitress might seem like a frivolous musical centred around pie. Song lyrics by Sara Bareilles – of radio hit Love Song fame – brim with baking references, flour and sugar are tossed around by the ensemble and mobile pan racks double as dance partners on stage. But under its sugary lattice crust and upbeat musical numbers is a devastating story about domestic abuse, adultery and the lack of options for unwanted pregnancies in America’s South.

Christine Dwyer stars as Jenna, a server and talented pie-maker at a small-town diner. When she discovers she’s pregnant, she’s hesitant to share the news with her deadbeat, alcoholic husband (Jeremy Woodard), and her co-workers encourage her to enter a baking contest for prize money to help her and the baby escape and start over. Meanwhile, Jenna falls for her new gynaecologist (Steven Good), which offers her fleeting moments of happiness. Only problem? They’re both married.

Dwyer, who’s played Wicked’s Elphaba on Broadway, clearly has the vocal chops and endurance required to play Jenna. Her controlled, multi-octave range is featured in nearly every number and never falters, even when performing Lorin Latarro’s dream-like choreography. The fear and hopelessness of her Jenna is so palpable that by the time she breaks into She Used To Be Mine, the show’s emotional climax, you’re tempted to want to dive at the stage and throw your arms around this person.

Fortunately, diner employees played by Melody A. Betts and Ephie Aardema provide the comedic and emotional foils to downtrodden Jenna in order to lift Waitress out of complete misery.

Aardema nails the physical comedy required in her solo and holds her own against scene-stealing patron Ogie (Jeremy Morse) in the musical’s most fun number, Never Ever Getting Rid Of Me. Good’s Dr. Pomatter is smooth, reliable and kind the fact that he’s crossing patient-doctor boundaries and cheating on his wife feels secondary to Jenna’s happiness.

While Waitress – adapted by Jessie Nelson from the 1997 Keri Russell movie – might seem like a period piece, harkening back to a time when life was simpler and folks made do with less, it’s underlying message – that women must be empowered to make decisions about their bodies, finances and destiny – feels more urgent than ever.